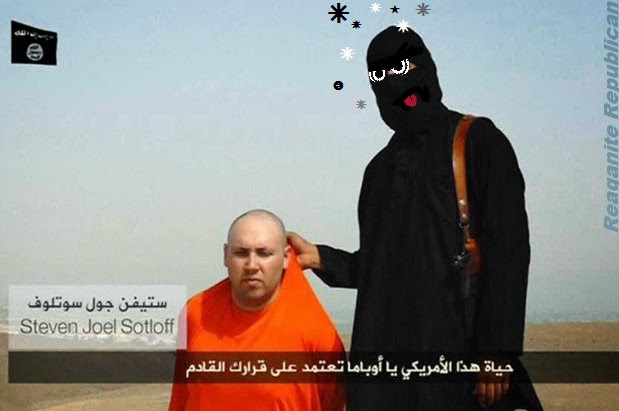 Just when you thought the blood-drunk ISIS couldn't possibly become more repellant or damaging to this world, now 'The Islamic State' in Iraq and Syria is producing its own meth (and ecstasy) in recently-captured pharmaceutical plants in order to earn hard-currency from exports, ala North Korea...
If it wasn't worrisome enough that ISIS had taken oil fields and captured piles of gold from a Mosul bank, consider that now they're adding lucrative drug manufacture/export- making the group more economically-independent by the day. Human trafficking, sales of sex-slaves, pirating online and off all continue to widen ISIS's base of revenue and make them harder to stop
(especially with Obama's half-effort pin-prick air raids),
even if all their Sunni Arab backers were convinced to back-off for good.

Rather than attempting to grow poppies and produce/sell heroin -which is common money-maker for such militias in parts of Syria/Lebanon/Afghanistan- ISIS is utilizing newly-acquired industrial assets to manufacture their own product in their very own factories... the Iranians claim drug-trafficking has already become ISIS's chief source of income.
And while next-door China is the Norks' primary market for illicit drug exports, ISIS is actually working to penetrate the faraway US, working hand-in-hand with vicious Mexican cartels enjoying our all-but-open SW border- great.
See the synergy Obama regime policies bring?


Furthermore, there is clearly substantial organization and sophisticated fiscal planning for such a bunch of lunatics: ill-advised underestimation of our enemy is clearly not working for the United States/UK as a strategy to this point. While our president makes token gestures and strongly-worded statements, ISIS is diligent, resourceful, and utterly determined to disembowel each and every one of us- Allah willing. If you are American and somehow still feel safe with Obama as CiC, you either aren't paying attention
-or ought to have your head examined.
And it gets worse: Nazi Germany's advanced pharmaceutical industry developed the fore-runner of today's crystal meth a long time ago, which was utilized widely to keep soldiers/pilots awake and focused while staving-off hunger, especially in the late, dark stages of the war. The label on 'Pervitin' warned it was only for 'occasional use', but that didn't stop many from getting utterly hooked on the stuff, even writing letters home begging for more.
But for anyone familiar with the bizarre, warped, and violent behavior use of the highly-addictive drug can produce, it really doesn't sound like something we need being combined with Islam... like mixing nitroglycerine with plutonium just to produce the most scary crap imaginable.
That's just what a former top DEA agent saying on Fox yesterday, that ISIS jihadis are now being plied with meth as they kill, rape, and chop their way across the Middle East, as were many of the worst SS officers when they committed atrocious war crimes. And ISIS's killing sprees are beginning to make the SS look like a bunch of girl scouts.

Odd such a harsh, dead-end drug being used by supposedly 'devout' Muslim recruits so casually, but conquest and subjugation is all Islam ever really stood for anyway, the rest is negotiable just as long as you deliver gains for the cause. If you need a few thousand numb, efficient -yet disposable-
killing machines... meth makes sense from a management standpoint.
Now, whatever meth they don't use will soon be on it's way to US shores as they crank-up production over there (pun unintentional)...
just keeps getting better, doesn't it.
TOPICS: Health/Medicine; History; Military/Veterans; Politics
KEYWORDS: isil; isis; meth; mexican Navigation: use the links below to view more comments.
first 1-20, 21-31 next last
1 posted on 10/07/2014 8:47:00 AM PDT by Reaganite Republican
[ Post Reply | Private Reply | View Replies]
To: AdvisorB; ken5050; sten; paythefiddler; gattaca; bayliving; SeminoleCounty; chesley; Vendome; ...

2 posted on 10/07/2014 8:48:08 AM PDT by Reaganite Republican
[ Post Reply | Private Reply | To 1 | View Replies]
To: GOPsterinMA; NFHale; sickoflibs; Arthur Wildfire! March; fieldmarshaldj; BillyBoy
Rather than attempting to grow poppies and produce/sell heroin -which is common money-maker for such militias in parts of Syria/Lebanon/Afghanistan- ISIS is utilizing newly-acquired industrial assets to manufacture their own product in their very own factories
3 posted on 10/07/2014 8:53:46 AM PDT by Impy (Voting democrat out of spite? Then you are America's enemy, like every other rat voter.)
[ Post Reply | Private Reply | To 1 | View Replies]
To: Blue Jays
I support ISIS fighters getting wasted on meth, crack, marijuana, alcohol, and anything else they find.
It will make them far less effective as fighters and will speed their implosion as they get fatter (or emaciated) and lazier!

Like the Nazis Before Them....who do you think trained them?

The Nazis preached abstinence in the name of promoting national health. But when it came to fighting their Blitzkrieg, they had no qualms about pumping their soldiers full of drugs and alcohol. Speed was the drug of choice, but many others became addicted to morphine and alcohol.

These are the true zombies.

If the Nazis had been on meth, they would have spent their time staring and shivering.

On the plus side they will kill each other for some meth.
The last words some will hear is the reason you can’t yell is because I slit your throat.

Kill them all and let Allah sort them out.

Hitler himself took a crapload of stimulants. His quack doctor would give it to him and tell him it was vitamins or nutritional supplements. Goering was hooked on morphine due to injuries suffered in WWI. I’ve read accounts of German troops living on stimulants and little else for days during the Normandy campaign. Allied troops used stimulants as well, but much more sparingly. Oddly enough, my ancestors the Celts had the opposite approach: the night before a battle they would get stinking drunk. Of course, my ancestors also went into battle naked and painted blue, so who really knows what their reasoning was.

Islam mixed with Drugs. Just like the Assassin cult.

Not just the Nazis. Some US troops really understood the benefits of Benzodrine in several wars.

The drug they took is chemically related to meth, basically an inferior cousin that is linked at the Der Spiegel piece above

It was the first methamphetamine, according to the article- and same effect as current meth, just a bit less powerful