Who doesn’t love Bill O’Reilly? He’s witty, charming, sarcastic, and has just a little bit of that pompousness that makes the guy borderline adorable, in a non-homo kind of way.

He also tells-it-like-it-is, and he’s pretty darn good at it.

Unfortunately, these characteristics are not fully appreciated by State Department spokesperson Marie Barf Harf, who has been taking every opportunity she can to throw the conservative powerhouse under the bus for criticizing one of her female colleagues, a move she labeled “sexist.”

Of course, it’s pretty dang hard to take any claim of “sexism” or “racism” serious from a liberal, as they have a tendency to throw these sort of terms around like the boy who cried wolf.

After a few thousand times of hearing the same whining and crying, you sort of shut down and block them out.

Well, it seems O’Reilly decided to pull out his rhetoric pistol and fire a few shots of his trademark wit, sarcasm, and good ole fashioned common sense right back at Ms. Barf. Oops. I meant Harf. Can’t for the life of me figure out why I keep doing that. 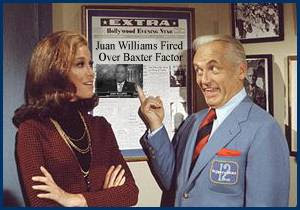 2 posted on 09/09/2014 3:55:34 PM PDT by 2ndDivisionVet (The most dangerous man to any government is the man who is able to think things out for himself.)
[ Post Reply | Private Reply | To 1 | View Replies]
To: SentinelOfLiberty
Who doesn’t love Bill O’Reilly?

MANY FReepers detest him.

He’s witty, charming, sarcastic, and has just a little bit of that pompousness that makes the guy borderline adorable, in a non-homo kind of way.

YOU are definitely a fan. I watch him sometimes.
I've heard him and know where he stands on EVERYTHING, so I watch him only once in a while.

Oh goody. Another link to a blog full of pop ups. Where’s humble gunner when you need him?

What seems to have caused you to excerpt your free Wordpress blog?

Do you expect to get a lot of hits?

“I never had sex with that woman”

I'm always right at hand
Say my name and there I stand...

I gave up on O’Reilly the day he accused FR of being radical.

Ted Baxter is late to the game. He has only recently discovered the depth of the corrution and incompetence in this administration. It wasn’t all that long ago that he was yelling at guests, “Obama isn’t a socialist!”

He spends way too much effort attempting to be “balanced”, which means he’s wrong a lot of the time. Not really a conservative. More of a self-promoter.

As such, BOR makes my skin itch.

If you want legendary, you need to tune in to Mark Levin.

9 posted on 09/09/2014 4:06:03 PM PDT by kidd
[ Post Reply | Private Reply | To 1 | View Replies]
To: SentinelOfLiberty
He’s witty, charming, sarcastic, and has just a little bit of that pompousness that makes the guy borderline adorable, in a non-homo kind of way.

Sounds like Mr. Cantrell has...shall we say, emotions for BOR?

Yep, I detest him and have not watched since.

Why do the Swift boat vets hate him?

Well Mr. Michael “SentinalofLiberty” Cantrell ... I can pretty much guarantee that no one here has used the name “Bill O’Reilly” and the epithet “homo” in the same sentence until *you* brought it up.

By the way - What stopped you from posting your full content here?

Pimping for hits your first week on the job?

I confess to detesting the man.