As we head into the Memorial Day weekend celebrations, there are a lot of awkward news stories out there that aren’t getting much coverage, thank goodness. This one, for example, about the leader of the once-free and richest nation on earth becoming the butt of jokes – in Russian no less! 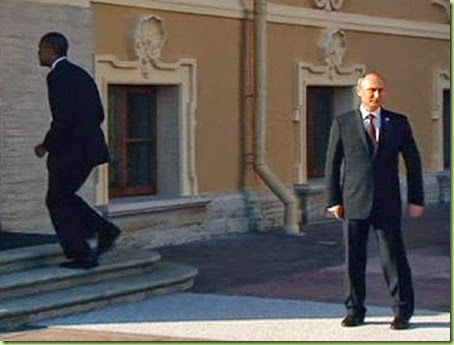 “I dismiss you, golubushka, you may leave now.”

Putin made the comments during an on-stage interview at the St. Petersburg International Economic Forum as CNBC host Geoff Cutmore was telling him Obama had 'accused you, as you know, of untruths when it comes to supporting some of the separatists groups...'

At that point, Putin interrupted Cutmore to make fun of president Obama, which drew laughter from the audience.

‘Who is he to judge, seriously?’ Putin asked, according to a translator. ‘If he wants to judge people, why doesn't he get a job in court somewhere?’

Meanwhile, BO was off promoting what the White House calls its "travel and tourism agenda" by visiting the Baseball Hall of Fame in Cooperstown, NY. 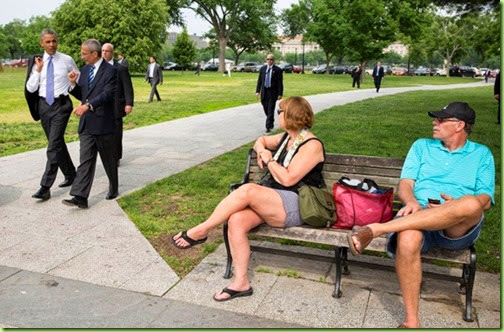 “Oh look! There’s some tourists! Why aren’t they wearing shorts?”

While there he gave a speech about, what else, those famous “Mom jeans” he wore when he “threw” his first pitch as President: 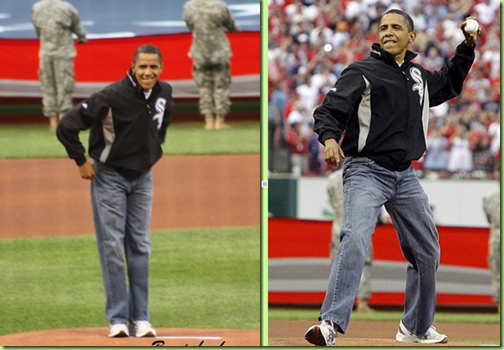 The windup…the pitch! Look at that form!!

By the way, this is Putin’s idea of “travel and tourism:” 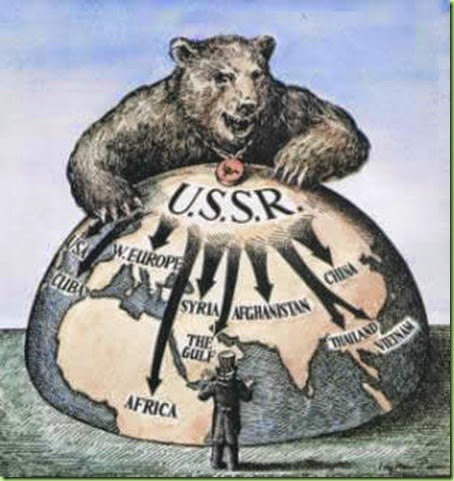 The visit the Baseball Hall of Fame was a convenient business stop on the way to Chicago to glad-hand some hometown one-percenters while blaming his failure to complete his transformation of Amerika on the Constitution, which he’d also like to fundamentally transform:

President Obama is taking a swipe at the Founding Fathers, blaming his inability to move his agenda on the “disadvantage” of having each state represented equally in the Senate.

At a Democratic fundraiser in Chicago Thursday night, Mr. Obama told a small group of wealthy supporters that there are several hurdles to keeping Democrats in control of the Senate and recapturing the House. One of those problems, he said, is the apportionment of two Senate seats to each state regardless of population. 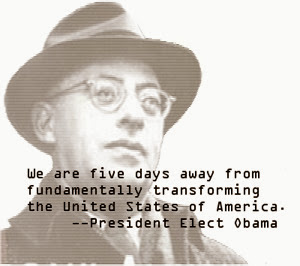 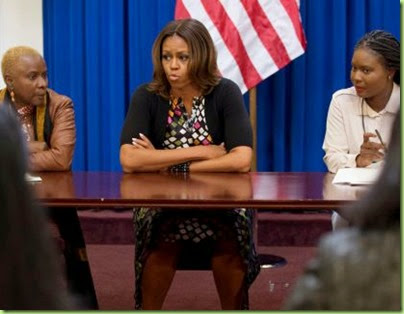 Those knees could use an aspirin.

Michelle Obama dropped by a roundtable of experts focused on international education Thursday morning and used the occasion to speak out again about the Nigerian schoolgirls kidnapped by the terrorist group Boko Haram. Seated in the center of a conference table with 14 people that her office described as international education experts,  the first lady said that “what has been going on in Nigeria is a tragic reminder” of the need for educating women and girls.

Although I know Lady M was trying to use this platform to advance her take on the #BringOurGirlsHome campaign, most people see both of these situations more as  “tragic reminders” of how dangerous and misogynistic Islamo-fascists are.

Continuing with her talking point: 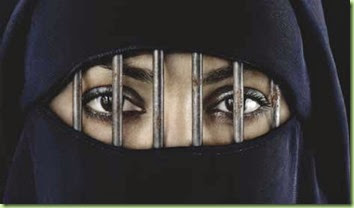 Actually, you don’t have to go around the world to find millions of girls who are not in school. We’ve got millions of our own who have dropped out because they’ve been punished with a baby after Plan A and B failed. And now they are de fatso victims of discrimination.

While nobody is technically preventing these girls in America from going to school - assuming they have Moms or Grandmas willing to provide daycare for their babies, as colicky babies are such a distraction in number bonding classes - apparently there is a form of soft discrimination against girls with babies, preventing them from going to high school.

Pregnancy is the #1 reason girls drop out of school.  Approximately 70% of teenage girls who give birth leave school.  More than any other group of high school dropouts, girls who leave due to pregnancy report that they would have stayed in school if they had received greater support from the adults at school.

And this is, clearly, racist:

Data from the Centers for Disease Control shows that in the more affluent Issaquah-Sammamish area, the birth rate for girls age 15 to 17 is 1.6 per 1000, while in less affluent Burien it’s 16 times that at 27 per 1000.  In Northeast Seattle the rate is 1.7 per 1000, but in Southeast Seattle it’s 18 per 1000.  This stark disparity reflects a trend we have been seeing for several decades: Pregnancy among White and Asian students has steadily decreased, while pregnancy rates for American Indian/Alaskan Native, Hispanic and Black students have been unchanged.  Some studies suggest that in the Hispanic community 1 in 2 teenage girls become pregnant, in contrast to the national average of 1 in 4.

Good news though, apparently we are taking measures to help overcome this illegal discrimination by giving teen moms the recognition they so rightly deserve in the high school yearbook:

"Student parents don't have time to go to homecoming and do all that because they have a kid, so they don't really get to be seen on the yearbook, so we thought it would be a good idea to put them on the page where they could be seen."

Still, I don’t get it; 30 years of Progressive Sex Education, and this is the best we can do? 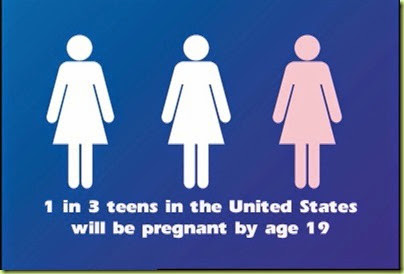 No wonder Big Guy is so concerned about giving every girl free birth control, by any means necessary; being punished with a baby has life-long consequences. 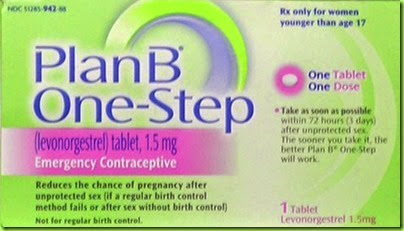 Plan B, for when Plan A, which you forgot to make, fails.

And just in case you don’t think that discriminating against teen Moms is illegal, let me set you straight:

Discrimination against pregnant students is strictly prohibited by Title IX – the federal law banning sex discrimination in public schools – but it is widespread nonetheless.

No, seriously; that’s what the article says. I just report, you deride. And while I don’t know exactly how, I’m pretty sure this illegal discrimination is part of the Republicans’ War on Women.

As she closed her remarks, Obama said the issue of educating women and girls internationally is important to her and she plans to work on it long after leaving the White House.

A woman seated to the first lady’s right remarked: “We don’t doubt that we’re going to be hearing from you.”

The room erupted in gentle laughter.

Funny, that’s exactly the same reaction that Putin got after his comment about Big Guy, although there it  was referred to as “chuckling.” 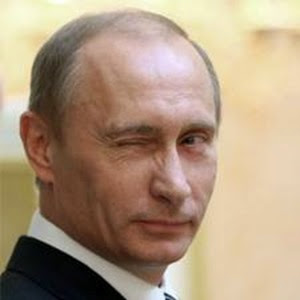 And don’t even get me started on the phony scandals that the pesky right-wing media continues to yammer away at. Pace yourself, we’re going to be here all weekend, folks, before the Summer Sabbatical begins.

Planned parenthood: another name for eugenics ...

Why is it called ‘Planned Parenthood’ ?

It’s all about UNPLANNED pregnancies and AVOIDING parenthood.

Golubuska = My little dove. (one meaning) My darling. Has other uses;
info from: