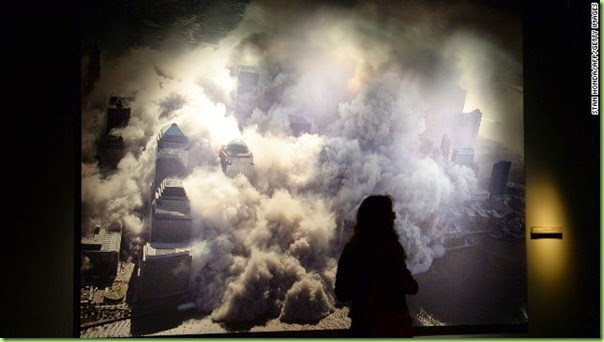 The memorial opened its doors after nearly 13 years of bickering with CAIR over how best to honor Muslims’ non-participation in this “man-caused” disaster. 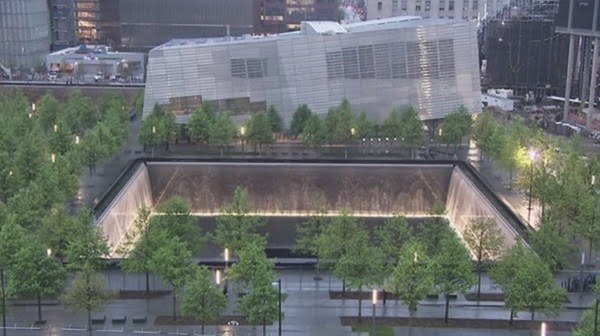 Deferring to the spirit of the adage “if you don’t have anything nice to say, don’t say anything at all,” I’ll keep this brief. Like BO’s remarks:

“Mr. Obama’s remarks were crisp and short. He was given just three minutes on the program, although he took nine, an unusually short speech for a president at such a high-profile event. But he was not the main focus of the day.” 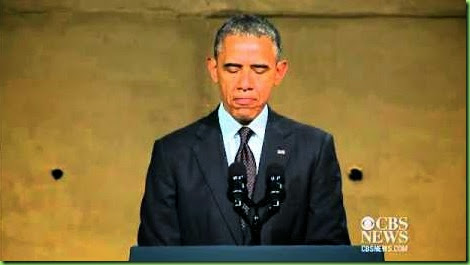 BO, not the focus of the day

Instead, yesterday’s focus was on the people who died that day in one of several man-caused infernos. All died by the hand of Islamic terrorists; victims of an evil, anti-female, anti-gay, anti-American, anti-Semitic and incredibly barbaric political/religious cult.

BO told the assembly of survivors and family members of victims that the museum was a special place dedicated to the memory of the event and the victims:

“Here we tell their story, so that generations yet unborn will never forget.”

Due to time constraints, BHO failed to mention specifically what we don’t want the yet unborn to forget: that if we are to protect our freedoms we must be forever vigilant and willing to fight ruthlessly against the evil in the world that despises the very tenants of our freedom and democracy.

And I’ll stop there, having run out of good things to say about Islam.

In fact the only other good thing at all about yesterday I can think to say is that it takes a very special woman to make Hillary Clinton’s butt look small; Lady M rose to the occasion. 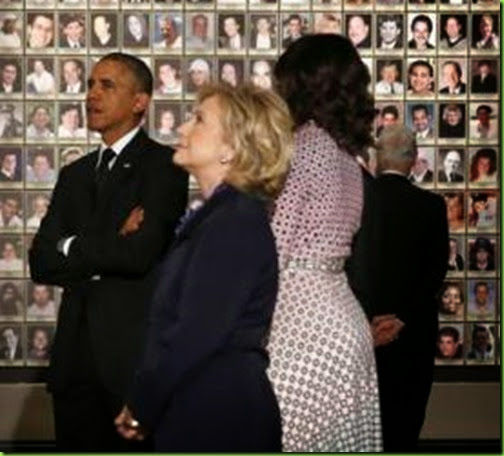 Although we’ve come to expect as much, her dress seemed a bit unusual for such a somber occasion. Butt I guess it was better than the sleeveless frock sporting an asymmetrical hem and equally odd blouson waist that she arrived in: 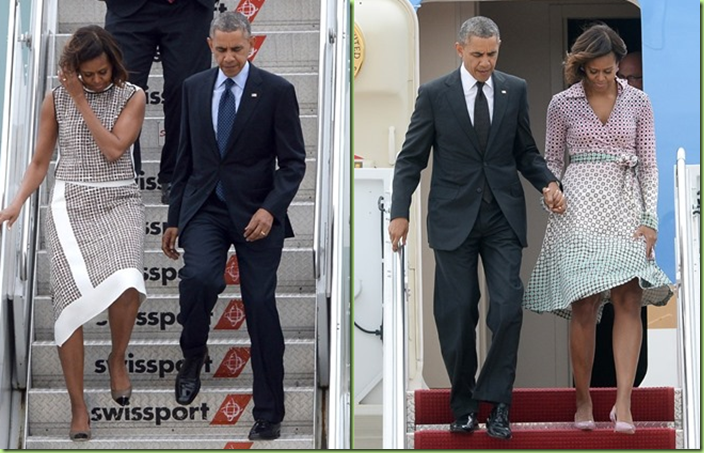 His and Her Grace deplaning, respectively, in New York and D.C.

Sort of, I guess. Again, having run out of nice things to say, I better quit.

I leave you with this final thought: soaring rhetoric calling upon us to “never forget” such evil is simply shallow, hollow and cheap sentimentality unless we are willing to do what ever is necessary to prevent it from ever happening again.

For once, I think Michelle’s dress is appropriate, although I bet they had to kill a lot of polyesters to make it.

Did the moron apologize?

If you can’t say something nice, period, why don’t you just shut up.

I’ll say it for the bogus POTUS: 911 was not an inside job, it was not a planned demolition by GWB, it was conceived and executed from start to finish by criminal, jihadist Muzz!

As part of Rev. Wright’s program to pair beards with on-the-down-low black males such as Obama, could he have intentionally or unintentionally done so with cross dressers or transgenders? Michelle definitely is Barry’s beard. I seriously wonder if FLOTUS actually is a drag queen or a she-male. Thoughts?

Both outfits are butt ugly. I think Moochelle is packing on the weight again.

i like the wrap dress... and wrap dresses are very forgiving and flattering on just about any body type... i think it is pretty... the first one is not meant for a bulky gal... on top of all that, she needs to take a course in Poise and Grace... seriously, it is not okay for a First Lady to walk down steps like a caveman...

Qur'an (7:80-84) - "...For ye practice your lusts on men in preference to women: ye are indeed a people transgressing beyond bounds.... And we rained down on them a shower (of brimstone)"

Qur'an (7:81) - "Will ye commit abomination such as no creature ever did before you?"

Qur'an (26:165-166) - "Of all the creatures in the world, will ye approach males, "And leave those whom Allah has created for you to be your mates? Nay, ye are a people transgressing"

Abu Dawud (4462) - The Messenger of Allah (peace and blessings of Allah be upon him) said, "Whoever you find doing the action of the people of Loot, execute the one who does it and the one to whom it is done.".

Abu Dawud (4448) - "If a man who is not married is seized committing sodomy, he will be stoned to death." (Note the implicit approval of sodomizing one's wife).

al-Tirmidhi, Sunan 1:152 - [Muhammad said] "Whoever is found conducting himself in the manner of the people of Lot, kill the doer and the receiver."

The only god muslim is a dead one!

I wish death for every damn one of them!!!

To satisfy their blood lust, Muslims then start
killing each other for a variety of reasons...

"Before I was nine I had learned the basic canon of Arab life.
It was me against my brother; me and my brother against our father;
my family against my cousins and the clan;
the clan against the tribe; and the tribe against the
world and all of us against the infidel."