The next step of the "gay marriage" agenda is about to begin here in Massachusetts. It's the push to use the legal system to force religious organizations to include homosexuality and transgenderism. 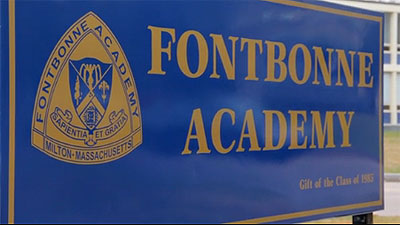 Fontbonne Academy in Milton, MA, a Catholic girls' high school, is under attack by the homosexual movement.

Across the country whenever a "gay marriage" battle heats up pro-family people are always told, "It's all about civil rights. It won't affect your religious institutions." And the politicians and judges believe them.

That's about to change. This week the powerful Boston homosexual legal group, Gay and Lesbian Advocates and Defenders (GLAD) filed a complaint with the Massachusetts Commission against Discrimination (MCAD) against a Catholic girls prep school because the school declined to hire a man because he is "married" to another man.

Back in July, Matthew Barrett of Dorchester applied for a job as the food service director at Fontbonne Academy, a Roman Catholic girls' high school in Milton, Mass., and was subsequently offered the job. When he filled out a pre-employment form listing his "husband" as an emergency contact the school told him that "the Catholic religion doesn't recognize same-sex marriage. We cannot hire you." 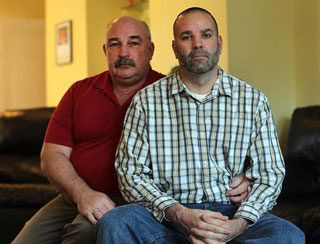 Barrett, right, and his "husband"

Barrett claimed to be shocked by the school's action. But it appears that he was purposefully dishonest. He told the Boston Globe that he was raised a Catholic and that he was informed by school officials during the interview process that employees are expected to follow Catholic doctrine. However, he did not tell the school that he was openly involved with homosexual behavior and was in a "gay marriage." Those, of course, are serious violations of Catholic teaching. Targeting religious organizations that refuse to change

Historically, GLAD acts very strategically. From transgenderism to public sex to gay marriage, they take on high-profile cases in order to force changes on society. This case represents the beginning of the homosexual movement's legal assault on conservative churches, particularly Catholic, that have steadfastly refused to modify their religious convictions and comply with the homosexual movement's demands on society. Up until now they've been largely left alone. But that's about to change.

As the Boston Globe related, this represents a new front in the culture wars:

Barrett's complaint, which may be the first of its kind in the country, comes at a time when religion-based schools in the increasing number of states where gay marriage is legal have been scrutinizing hiring and employment practices to ensure they conform with the pillars of their faiths.

School administrators have been fired from Catholic schools and universities in Arkansas, California, New York, and Washington, among other states, after marrying their same-sex partners or announcing plans to do so.

The well-funded homosexual legal groups, fresh from their victories in "gay marriage" federal and state lawsuits across the country, are now ready to take on the churches.

Religiously affiliated entities do not have a free pass to do as they please in how they treat employees, particularly when it comes to our important laws against discrimination.

Our laws carefully balance the important values of religious liberty and non-discrimination. When Fontbonne Academy fired Matt from a job that has nothing to do with religion, they came down on the wrong side of the law.

And as Klein said in the Globe article, the there is a big "problem" that the homosexual movement must stamp out:

We're seeing religion-affiliated entities more and more trying to push the line toward discriminating against gay, lesbian, and transgendered people.

In other words, God's laws must be made to bend to the homosexuals' will, not the other way around!

One clue of the seriousness of this is that GLAD got the story placed on the front page of the Boston Globe instead of somewhere inside. And GLAD had the Boston Globe's reporter interview Barrett in GLAD's downtown Boston office rather at his house or some neutral site. 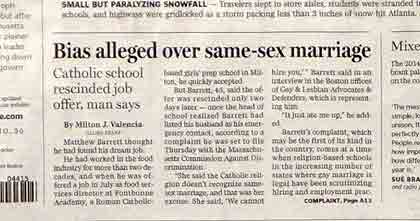 It's not surprising that a Catholic institution is the first being targeted by GLAD. Of all the major religious denominations, the Catholic Church in America has been the most consistent in not compromising its core beliefs to the Left, particularly on abortion and "gay marriage." Over the years, this has caused a particularly venomous hatred of Catholicism in the homosexual movement. 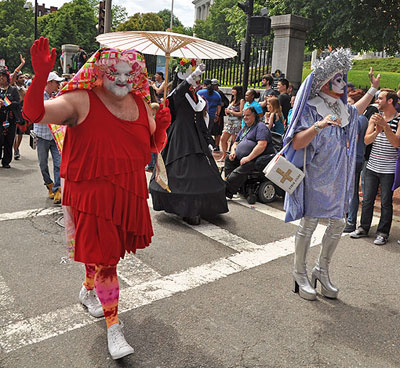 Another local example: In 2012, as MassResistance reported, a Catholic Church in Acushnet, Mass., simply had a sign outside supporting traditional marriage. Angry homosexual activists threatened to burn the church down, and demonstrated outside of the Sunday Mass with signs calling the parishioners haters. 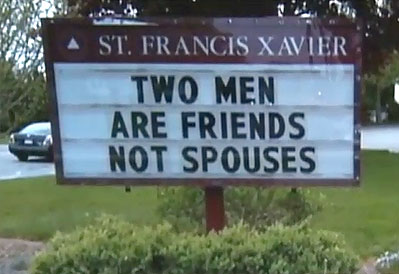 Sign outside Catholic Church in Acushnet, MA that generated horrible attacks by homosexual activists, including threat to burn church down.

We don't think that GLAD would publicize this case so dramatically if they didn't think they could win it. They certainly have huge ties to the Massachusetts Commission Against Discrimination. In addition, we expect that GLAD will put the full force of its legal team, and possibly even recruit free help from lawyers from gay-friendly downtown Boston firms to ultimately force Fontbonne Academy to hire Matt Barrett.

The homosexual movement knows that if it is successful in this case, it will set a precedent for Massachusetts and send a strong message to every other conservative religious institution in the state. But worse, it will surely become a template for similar action across the country in states where "gay marriage" exists, despite "religious freedom" clauses that may exist in their laws. Our side must fight back hard!

This needs to be taken seriously by our side and fought hard! It is madness, and should not have any legal leg to stand on. But as we've said over and over in the past, much of the mess we're in now is the result of mushy, fear-based legal defenses by pro-family lawyers in important cases. We are praying that Fontbonne gets the necessary kind of legal firepower to stop this.

As states across the country are confronting the issue of "gay marriage" being forced on them by activist judges and corrupt politicians, many "conservatives" have been backing off and saying that this won't affect them. This shows that they'd better think again.

And to those pro-family people who simply say that the "gay marriage" fight is about "every child needs a father and a mother" or "we're not against anyone; we're just pro-marriage" or similar politically-correct platitudes -- you need to come out of your fantasy world.

We will keep you informed on this case!

TOPICS: Chit/Chat; Miscellaneous
KEYWORDS: abortion; catholic; coercion; deathpanels; homosexualagenda; massachusetts; milton; obamacare; romancatholicism; zerocare Navigation: use the links below to view more comments.
first 1-20, 21-22 next last
"Let's not be naive, we're not talking about a simple political battle; it is a destructive pretension against the plan of God," wrote Cardinal Bergoglio in a letter sent to the monasteries of Buenos Aires. "We are not talking about a mere bill, but rather a machination of the Father of Lies that seeks to confuse and deceive the children of God." --- Jorge Bergoglio/Pope Francis
1 posted on 02/05/2014 12:24:42 PM PST by Mrs. Don-o
[ Post Reply | Private Reply | View Replies]
To: Mrs. Don-o

So much for “It won’t affect your life”.

There is no surer sign of decay in a country than to see the rites of religion held in contempt.
Niccolo Machiavelli

Homosexual “marriage” law is all about forcing the citizens to support and service homosexual behavior.

For a long time I’ve thought the “homophobe” thing wasn’t about protecting a small percentage of weirdos but about separating the majority from their religion since the communists decades ago realized that our religion, our allegiance to God, would interfere with allegiance to party comrades.

In the long run it didn’t work in the Soviet Union but I suppose the greed for power is never ending.

It seems Catholic schools should enjoy the First Amendment protections validated in the Hosanna-Tabor case. This involved the firing of an employee of a Lutheran school.

Churches based on the Word of God are an oasis of sanity so the gay advocacy groups have to co-opt them by forcing them to accept homosexual 'couples' as employees despite the fact that the religion the church-affiliated groups were founded on proscribes homosexual behavior.

It's another in-your-face attempt by the gay lobby to force 'acceptance' of homosexual behavior on the nation by using every legal means available. The anti-discrimination laws are the perfect tool for these people to misuse in order to force religious organizations to accept what is a sin to them and to do it under the force of law. It's diabolical - and no surprise. I pray they lose.

And that was a unanimous SCOTUS decision, too.

It may be too late already.

Boy! Are those two ugly bruisers! They look alike too which is a particular gay male phenomenon.

Yup. Narcissists. Making out with themselves.

Is this in a written opinion? Or...? Not sure what you mean by that.

Maybe the photo does not capture their good side.

“there is a big “problem” that the homosexual movement must stamp out:”

There is a big “problem”: the homosexual movement must be stamped out.

The political contracts of our nation are embodied in the states’ and national constitutions.

The social compact was Christianity based.

The two used to be separate, yet mutually supportive.

Now, the political establishment has every intention of consuming the social, the civil society.