Lady M summoned the food and media industry to the White House yesterday to give them their marching orders recommended guidelines for advertising to children.

She opened by asking everyone present to pledge to work together on marketing healthy food to children:

“You see, the average child watches thousands of food advertisements each year, and 86% of those ads are for products loaded with sugar, fat, salt,” she said that the event. “By contrast, our kids see an average of just one ad a week for healthy products like water to fruits and vegetables. Just one ad a week.”

And as you all know, these ads work.  Kids who see foods advertised on TV are significantly more likely to ask for them at the store –- a phenomenon known as “pester power.” (Laughter.)  New to me.  Sounds right though.  And research shows that a child’s first request for a product happens as early as 24 months, and 75 percent of the time, this request takes place in a grocery store.

OK, then – I believe we’ve established that this type of propaganda works. 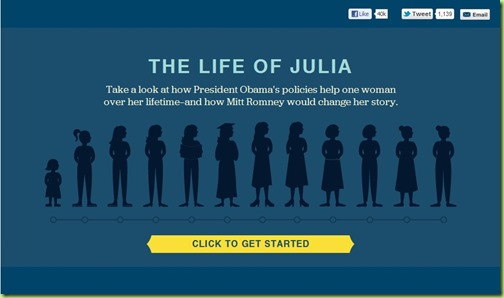 The meeting in the State Dining room was another sign that Obama, who has become widely known for her campaign against childhood obesity, is more forcefully taking on the role of referee between the politically opposed factions in the food wars. Her meeting, which the White House touted as the first of its kind, [!] comes on the heels of fresh conversation sparked by reporting in the book “Salt Sugar Fat: How the Food Giants Hooked Us,” which lays out the ways the processed food industry has effectively marketed junk food to children.

Would now be an appropriate time to mention the inconvenient truth that it was the federal government that first published food guidelines? And that the food industry not only followed them, they scrupulously formulated their food offerings to capitalize on them? For example, during WWII, our government asked us to save wheat for the troops: 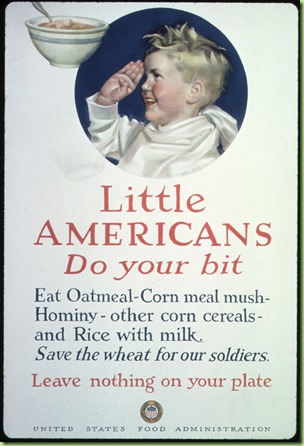 The food companies did their best to comply: 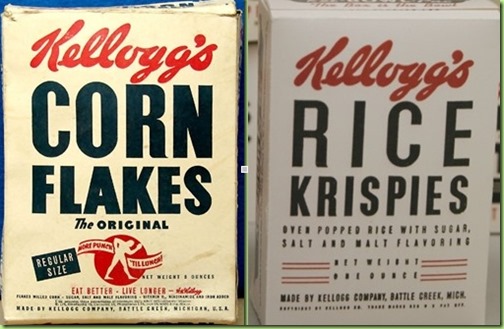 And when WWII was over and the sugar rationing ended, they continued to support the government’s recommendations:

Notably, they were simply following the government’s own current recommendation to eat more carbohydrates (emphasis added):

"It was Senator George McGovern's bipartisan, nonlegislative Select Committee on Nutrition and Human Needs…that almost single-handedly changed nutritional policy in this country and initiated the process of turning the dietary fat hypothesis into dogma."

In January 1977, after listening to the testimony of Ancel Keys and other doctors and scientists intent on promoting the unsupported Dietary Fat-Heart hypothesis, the Committee published the "Dietary Goals for the United States" recommending that all Americans reduce their fat, saturated fat and cholesterol consumption, and increase their carbohydrate consumption to 55-60% of daily calories. 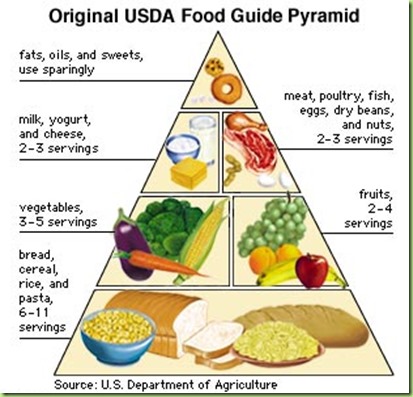 Then in the early 21st century Dr. Atkins' rocked everyone’s world with his earthshattering declaration that carbs, not fat, were the culprit in everything from obesity to diabetes to heart disease. At first the food police were dismissive, even derisive of Atkins' claims. When he refused to go away, they tried to demonize him as a dangerous extremist. Butt then data began to pour in supporting his claims that excess carbohydrates were contributing to obesity, diabetes and heart disease. Government health and dietary experts went into tilt mode for awhile. Butt then, they came bounding back under Lady M’s excellent leadership with a brand new food pyramid that was so revolutionary that few people even noticed that it wasn’t really a pyramid at all: 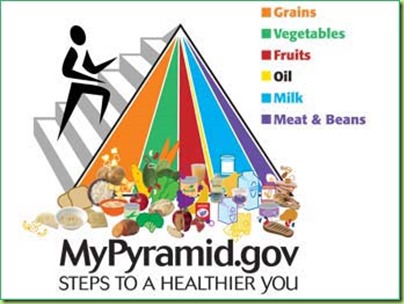 And although it had been years in the making, when released it wasn’t very clear and not particularly helpful. So we hired a new consultant to translate this mess concept into something simpler that could be grasped by our new, simpler population: 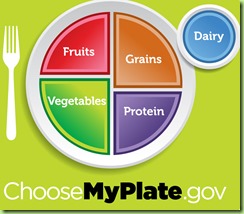 Many of whom no longer speak English: 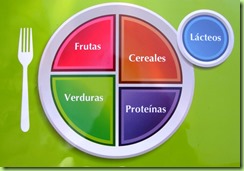 As either a first or second language: 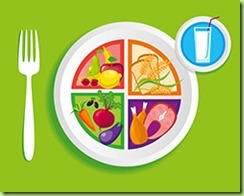 And while things were going pretty well:

I see it everywhere I go all across this country.  I see it in chain restaurants that are serving kale salads, and they're filling kids’ menus with not just nuggets and fries, but with broccoli and whole-wheat pasta.  I see it in churches where instead of fried chicken and mac and cheese for church supper, they’re serving up grilled fish and brown rice.

And even though Lady M was able to coerced convinced Walmart to offer Tuscan kale in the produce section of the new stores that they agreed to open in food deserts across America, McDonalds to replace french fries with apple slices, the Olive Garden to reduce salt in their recipes and the SEIU-staffed school lunch programs to serve bean and okra burgers with sauerkraut – the kids are still fat! And the new school lunches were in the dumpster.

And I’m here today with one simple request -- and that is to do even more and move even faster to market responsibly to our kids.  Now, I want to be clear about what I’m asking here…the goal here is to empower parents instead of undermining them as they try to make healthier choices for their families.

And we need you to lead the way in creating demand for healthy foods so that kids actually start “pestering” us for those foods in the grocery store.

Butt wait! Isn’t that the government’s job? “Pestering” us, I mean? 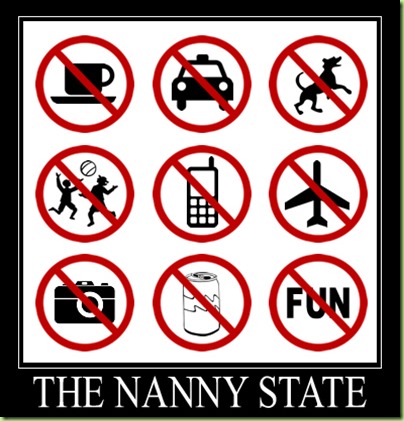 Lady M soldiered on, demonstrating an insightful, if rudimentary, understanding of free market capitalism, she pointed out why it would be in the industries’ best interest to pay and play:

And that trust is valuable.  That trust is good for your businesses.  That’s why so many of you in the private sector are leading the way on this issue. [ed. Uh, no; it isn’t. It’s because they’re being coerced by people who can destroy them if they don’t comply. See “IRS harassment of conservative groups” for further verification.] You are innovating.  You’re taking risks.  You’re serving as models for your industries, and it’s starting to make a difference -- not just for our kids, but for your shareholders as well.

See? Lady M knows that companies have shareholders! What other FLOTUS was ever smart enough to know that?

Anyway, having already established with Obamacare that we can effectively turn marketing on it’s head - instead of marketing stuff that people want, we can market stuff that the government wants them to have! So why not fundamentally transform the paradigm of “food marketing to children” the same way! It’s another WIN-WIN for team Obama!

Here’s an example of some of the marketing we’ve used to win the hearts and minds of people in Oregon for Obamacare:

And good news! It already looks like Lady M’s “encouragement” is working:

Some 18 food companies, including General Mills, Coca Cola and Kellogg Co., have pledged to advertise only healthier products on children’s programming, or not to engage in any advertising during such shows. The pledge was made to the Better Business Bureau’s Children’s Food and Beverage Advertising Initiative.

Now what is it, again, that we call it when that coercion “encouragement” is backed by the full faith and credit of the U.S. government? Oh yes, a “phony scandal.”

IRS employees were "acutely" aware in 2010 that President Obama wanted to crack down on conservative organizations and were egged into targeting tea party groups by press reports mocking the emerging movement, according to an interim report being circulated Tuesday by House investigators.

Or, alternately, I guess some people call it “extortion”. 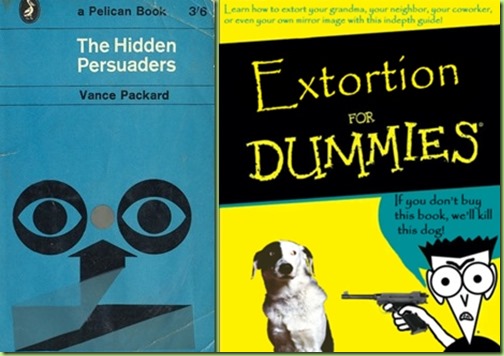 Who you calling a dummy? 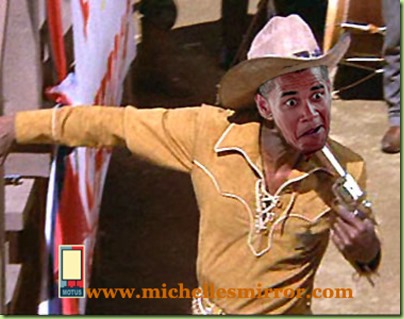 Is that Moochy climbing that pyramid?

I don’t see lobsta on that pyramid

It’s funny how my generation was subjected to the same advertisements yet we were not obese. Maybe it’s because we had Physical Education each day at school. If kids/people don’t exercise enough they get fat.

Libs never learn. They keep pushing their agendas, regardless.

How many $millions were thrown in the trash in the last few years as schools converted to Michelle’s programs, but kids refused to eat it?

Yet, here she is again, pushing the same kind of agenda.

It is ironic hypocrisy to see so many pictures of the Obama’s pushing junk foods into their own mouths, while pushing agendas for others.

As Orwell stated: All are equal, but some are more equal than others.

Or maybe we walked or biked to school? Or maybe because we played outside constantly, being forced to come inside for dinner or nightfall?