Well, it’s Friday. That used to mean late afternoon document dumps for the media to ignore. The last few weeks though, this gambit seems to have gotten a little out of hand. Now it seems we’re dumping new scandals, or new details from old scandals buried in previous Friday afternoon doc-dumps that the media ignored. And ever since that little phone tapping issue with the AP, they’re not ignoring them anymore!

So today’s scandal-gate dumps include a few new-only-to-the-MSM tidbits, including confirmation of the release of hundreds of level 1 through 3 criminals in Arizona as part of Big Guy’s game of sequester Chicken Little. An ugly little play that might just remind people of another potential scandal just waiting to erupt – or re-erupt, if you’re one of those conservative types targeted by the IRS who happens to watch Fox News. 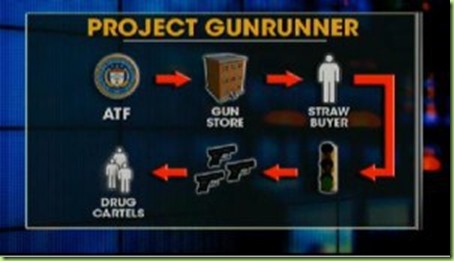 What could go wrong

Then there’s the case of the missing Terrorists. That’s right; according to allegations in yet another inspector general report released Thursday, professed terrorists who turned state’s evidence and were entered into a Mafia-style witness protection programs have gone missing. Apparently they slipped through the cracks.

Then there’s more news on the IRS scandal front: I see the woman responsible for the targeting of conservatives has been promoted! And got a $103,000 bonus! How about that, we’ve pinned  Intim-O-Gate on “ineffective management” and put the person responsible for the “ineffective management” in  charge of Obamacare? Is this a great country or what?

I’m sure it seemed like a good idea at the time, butt seriously – giving people who have the power to impose their judgment on your tax liability an incentive to maximize tax collections; what could go wrong? 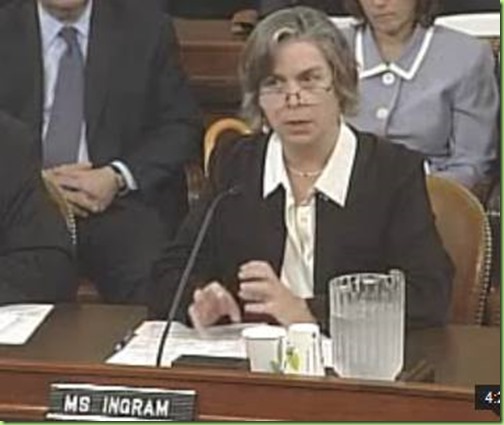 If we’re lucky nobody will focus on Ms. Ingram too much today, and turn instead to one of our cabinet level scofflaws, Kathleen Sebelius who was caught in a Chicago-style shakedown for “donations” to help fund Obamacare. It’s okay to break the law if it’s for a good cause, right?  And what’s a better cause than Big Guy’s Health and Human Services funding of O-care? 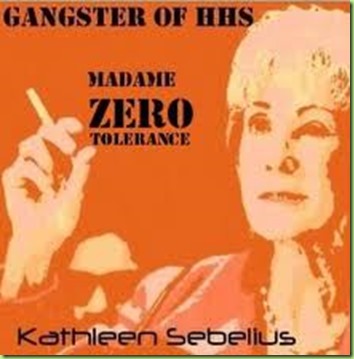 Butt don’t worry, BO didn’t know anything about that either. We just leave him out in the rain until all of his memories have been washed away. Disappeared, down the rabbit hole that is the Big O. 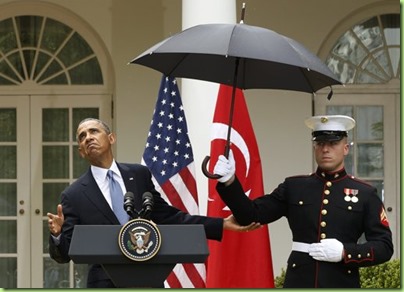 Okay, I can’t seem to remember anything, can I get back under the umbrella now?

Just for future reference, here’s an excerpt from an article on proper umbrella etiquette that may prove handy for Big Guy, given his unfortunate experience with umbrellas: 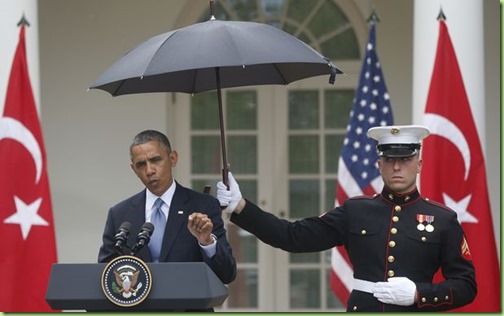 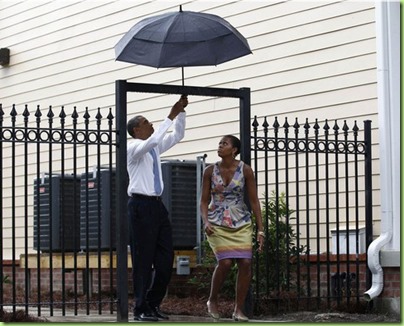 Make sure your umbrella is the proper height

Buckle your seat belt Bucky, it’s going to be a rough ride.

I’ve been advised of a yet another etiquette rule: Even the Queen holds her own umbrella. 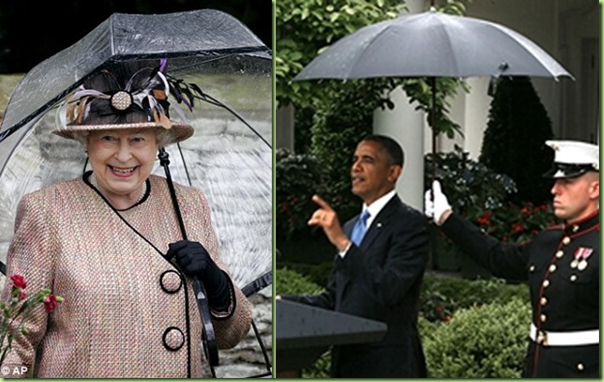 As you see though, in this case, a Marine is holding it for the Queen.

If England’s Queen can hold her own umbrella why can’t ours? Even Turkey's Prime Minister looks embarrassed by the LGBT-in-Chief

Dauters=daughters. Haven’t had coffee yet.

What? Of course, any self-respecting (and office-respecting) POTUS is man enough to hold his own umbrella!

Etiquette, Shoes on table, no coat, tie, flip people off...

Don’t care for that Etiquette. Please, Obama can’t think and hold an umbrella at the same time. /s