At his presser in Thailand yesterday, BO explained how he’s planning to deport the American System to the Near East: 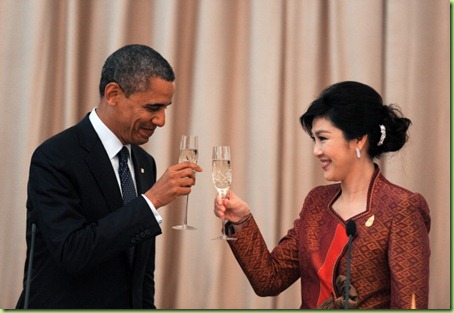 (snip)because Thailand I think is more successful economically than some of its neighbors, it's now in a position to be a donor country. 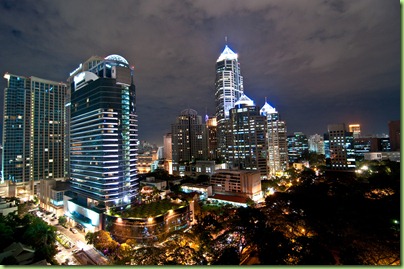 You didn’t build that on your own! Somebody else made that happen! Now it’s time to spread your wealth around.

Although the presser was in Bangkok, we had one of our cub reporters positioned to pose a question about the Israeli “situation” so Big Guy could get our official position on record so Bebe will stop bothering him

And then it was on to the primary reason for the trip: a victory lap, if you will, in Burma:  All hail, Caesar! 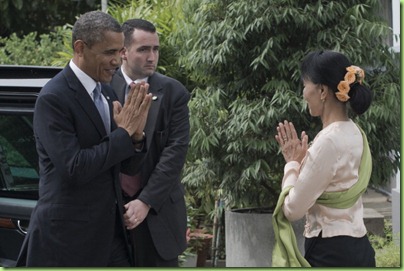 “I’ll have the Pad Thai, not too spicy.”

(snip)And imagine the audacity of someone who says that Big Guy is taking credit for the ground work done by the Bush administration; treasonous! To imply that Bush had anything to do with it I mean.(snip)Anyway, next, Big Guy schooled them on how democracy works...Continued

It looked like a sexual assault when Barry met Ms Kyi!

Yes, it certainly did.

I’m beginning to wonder whether my assessment of his being light in the loafers was wrong... maybe he is just PW’ed at home.

Get a new one on your trip.

On Air Force One, you're free to roam,

Moochelle's not there to give you lip.

Except he pronounces it PUCK ee stahn.

Another vacation on our dime, UGH!!!!!

The First Buffoon Strike Again. It’s a good thing Romney didn’t say this. All hell would be breaking loose right now. We’d never hear the end of it.