Is it just me or is Joe Soptic a dead ringer for Bob Newhart? 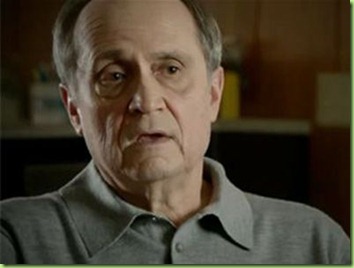 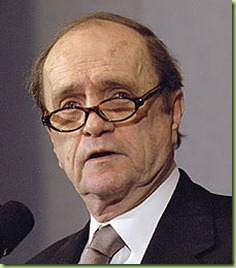 A real live, separated-at-birth twin of the famous stoic comedian?

I leave it to the pundits to determine the veracity of Joe Soptic’s claim that Mitt Romney killed his (first) wife by heartlessly offering him a buy out from his job as a steelworker – that he refused – before closing the steel mill that Bain bought in 1993 and operated for 8 years before it succumbed to the harsh economic realities of high labor costs (not helped by the 10 week union strike in 1997) making them uncompetitive against cheap Chinese steel that continues to this day to be dumped in America...

...Nor is it my place to point out that if you’re sick in America, whether you have health insurance or not, you can still get health care – just ask any illegal alien living in the shadows. In addition to Medicaid, Medicare and just showing up at any emergency room, there’s still that old fashioned concept of pay-as-you-go. Sure, you may end up deep in debt; that’s the risk you run when you chose not to buy the health insurance your new employer offered. Butt it’s not as if Americans are averse to burying themselves under debt, look who we elected Prezzy. Heck back in the 2000’s when Joe’s plant closed, you could even buy a house without a job! (Thank you Barney Frank and Chris Dodd) Student’s could - and still can – borrow $100 thousand+ without a job or any HOPE of finding one...

I saw him the other day and wondered “who is that? He looks familiar”.

I thought almost the exact same thing, “I knew I’ve seen him before”

Some people would rather DIE, or allow their loved ones to die, before they would pay for their own health insurance.

Medical care is NOT an enumerated right in the Constitution, nor is it a divinely granted right under “life, liberty, and pursuit of happiness”.

As the most recent interpretation of the Constitution goes, we may be TAXED to provide medical care on a national basis, but we do not have to accept the kind or quality of care offered under these circumstances. The hard part of this equation, however, is that no alternative is offered to the greater majority of people in this country any more, other than to refuse to participate in receiving the care.

The way it is written, you must pay, whether you receive any benefits or not.

He got a job as a janitor after being laid off that, as he said, had healthcare for him. What he didn't tell you is that he could have put his wife on it, but she had it already with her job. Adding her would cost his cheapass more money, and there was no way she could lose her job, too, right?

Greedy liberals out to get everything they could. Too shortsighted to plan, too stupid to think. Too cheap to pay their own way.

Somebody please ask how much this asswipe has been compensated by Obama, or by that effing super PAC that made ANOTHER commercial besides the one Obama made.

HE killed his wife - no one else.

Obama is putting Coal Miners and Coal fired electrical plants out of business and out of employment by the hundreds, How many will that kill?

This whole story is a batch of Obama BS.

Why isn;t Romney pointing this out?

Because Romney is taking a "dive" like Juan McLaim did.. Some of his campaign team worked for Juan.. they know how to do it.. Can't be totally obvious or the RUBES will catch on...

The fix is in.. ever wonder how the inventor of Romney-care could run against the inventor of Obama-care?..
What a cartoon that is.. Wiley E. Coyote must at least appear to care about catching the Roadrunner..

The republican party is manned by cartoonists..
The roadrunner has never been in any real danger..
Obama watches Myth's TV ad and goes......
,,,BEEP.. BEEP.. and then LAUGHS..