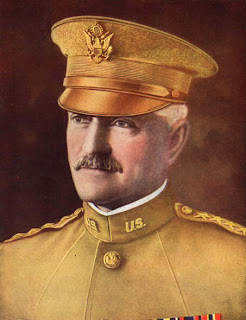 Although the indigenous uprising following American victory in the Philippine Islands (conducted by our former allies in the fight against the Spanish) ended formally in July 1902, various insurgent groups were determined to fight on. A great number of these were Moro terrorists, ancestors of today's MNLF
(Moro National Liberation Front), a bloodthirsty group of Islamic seperatists funded by nice people like Iran and -until recently- Muommar Gaddafi.
The legend goes that after continued terrorist attacks on US troops and installations -in addition to the massacre of captured American soldiers- General Pershing ordered his Marines to go out and round-up 50 adult male perps.  Back at the base, they were promptly strapped to wooden polls, execution-style.
As the firing squad had been ordered -and to the resolute horror of the Moro captives- a couple pigs were freshly slaughtered right in front of them. Our guys then soaked their bullets in the blood and fat prior to loading.
After executing the first 49 -who according to the Koran were automatically barred from Paradise (even while dying a martyr) due to porcine 'contamination'- Pershing had the bodies unceremoniously tossed into a mass grave with the residual pig carcasses/entrails piled-high on top, a yummy snack for the confounded jihadis to enjoy on the way to Hell.
The 50th Islamist was then cut loose to go tell everybody back at the encampment exactly what he'd just witnessed... and for 42 years, there was not a single Muslim terrorist attack anywhere in the world... how bout that.
True story? The libs at Snopes couldn't disprove it... and imo shows the amazing potential of today's innovative Plant-a-Pig program(!)
Fittingly, it was the American Pershing II missile -installed in western Europe by Ronald Reagan in the 80s- that perhaps tipped the Cold War's balance and put the Soviet Union back on their heels for good.
And don't forget the mighty, Tiger-crushing M-26 Pershing heavy tank: General John 'Black Jack' Pershing was a prized mentor to Bradley, Marshall, Patton, and Eisenhower- no less.
As for the terrorism... Ole Blood-n-Guts also had a thing or two to say about that -here-
___________________________________________________________________________
CFR.org   Arlington National Cemetery   Wikipedia Science.com  Start.umd   Smithsonian
TOPICS: History; Humor; Military/Veterans; Religion
KEYWORDS: islamists; mnlf; patriotpershing; pershing; pershing4america; terrorism Navigation: use the links below to view more comments.
first 1-20, 21-30 next last
1 posted on 12/07/2011 6:52:28 AM PST by Reaganite Republican
[ Post Reply | Private Reply | View Replies]
To: Reaganite Republican

Pershing was a General in the US Army, not the Marines

Rest assured, though, MY bullets will glisten with grease when The War comes...

You know that’s what I started with, and was corrected (wrongly)... thx

Can only correct it at my site, tho

The war against the muslim moros was fought from 1903-1913 and was a protracted, bloody war that pit carbines, pistols and cannons against knives and blunderbusses. This didn’t make it any easier as the moros fought savagely.

Pershing didn’t spend much time in moroland; rather, Leonard Wood was the domineering American figure in that war fought to achieve the complete subjugation of the multitudinous muslim princes. Many thousands of moros were killed in that ten year war which would have ended much earlier had the enemy been one other than the moro.

It was a most interesting chapter in the history of the U. S. Army, especially, and the other forces of America in a more minor role.

I think I need to read that, ty for sharing

They are still a problem down there... no?

According to my dad, who was a pistol instructor in the army, that war was when they decided the old 38 revolvers weren’t good enough and went to a 45ACP. The Moros supposedly were taking a drug to make them aggressive, tireless, strong, and impervious to pain. 38s had no effect.

You can ask the admin moderator here to correct it.

I’m reminded of how after we dispatched Osama bin Laden....we gave him a Muslim funeral—as if he had been an honorable opponent.

Reaganite Republican:
I’m reminded of how after we dispatched Osama bin Laden....we gave him a Muslim funeral—as if he had been an honorable opponent.

If it was Osama, Obama gave him the highest honors
for murdering Americans.
Murdered American heroes in military hospitals
are not afforded a Bible even at their death
because of Obama.

Finished reading this book about a week ago. There is no mention of the pig incident at all. Pershing was a more winning hearts and minds type of counter insurgent, an early Petreaus type. The Moros would revolt, gather on a extinct volcano, and wait to be slaughtered by the US Army. They did not understand guerilla tactics. US officers felt the Plains Indians had a better understanding of warfare than the Moros.

He was a great General. And he had some great tragedies in his personal life.

***and was a protracted, bloody war that pit carbines, pistols and cannons against knives and blunderbusses.***

This is why the .45 automatic pistol was developed.

Why is it the military has to learn some lessons all over the hard way?

****US officers felt the Plains Indians had a better understanding of warfare than the Moros.****

You don’t need to understand warfare when your prime motive is to become a martyr.

The juramentados was an early version of a suicide bomber. Interesting that the motivation for many juramentados was that they were losers in this world, so suicidal attacks on infidels would speed up their trip to the next world.

18 posted on 12/07/2011 7:32:55 AM PST by gusty
[ Post Reply | Private Reply | To 16 | View Replies]
To: mamelukesabre
They also wrapped hemp rope around their torso to keep the .38 caliber projectile from doing much damage as it passed through their bodies. The .45 ACP left all of its 900 lbs of knock down power within their body cavity. I have seen some photos of the results of both. I also carry a .45 and I have since I was 18 years old. To steal a phrase... "Don't leave home without it".

But he was the Commander of US Marines in WWI. One of the few times that has occurred.