I'm fair puckled! Another day. Another reason to deny my Scottish heritage. From the Telegraph, London (so it must be politely explained):

The Scottish Tartans Authority has decreed that refusing to put on underwear beneath a kilt is "childish and unhygienic".

It also warned that "going commando" flies in the face of decency.

Tartans Authority director Brian Wilton said kilt wearers should have the "common sense" to realise they should wear underwear beneath their country's national dress.

He said "The idea that you are not a real Scot unless you are bare under your kilt should be thrown into the same wastepaper basket as the idea that you're not a real Scot unless you put salt on your porridge. As you can see, this is a contentious issue, up there with our history-changing global financial crisis, partial-birth abortion concerns, and climate change-related theories (although wind forecasts, oddly enough, are related). 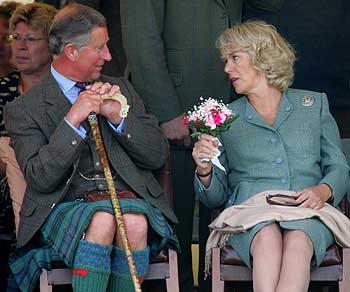 3 posted on 12/02/2010 5:35:11 AM PST by ConorMacNessa (HM/2 USN, 3/5 Marines, RVN '69 - St. Michael the Archangel, defend us in battle!)
[ Post Reply | Private Reply | To 1 | View Replies]
To: AustralianConservative
Brian Wilton is taking an underwear posito ioon kilts which is pure fabrication. The tradition of Scotland ius that nothing is worn under, and in the British military nothing is worn under the kilt.In the Scottish Highland Regiments , if a socldier is caught wearing anything under kilt, it is cause for dress demerits and punishment.

So Brian Wilty Wilton is nothing but a softy Brit trying to redefine Scotland as uncivilized. There are reasons for not wearing anything under.

Then there’s the woman who asked a Scot soldier if anything was worn under his kilt.
“Nay, lassie,” he replied. “It’s as good as it ever was!”

A disturbing thought on so many levels.

LOL: I guess the people have spoken.

Reminds me of Groundskeeper Willie in The Simpsons.

Any idea how the term “going commando” came to mean not wearing any underwear?

I would demand underwear for the men for the same reason I demand women wear undies under their dresses and skirts: it isn’t nice or sanitary to leave fur droppings wherever you go. ... It is said loose pubes get on coke cans don’tchaknow!

LOL: Point taken. But a bit hard to police, don’t you think?

Yes, but to take a shite or a pish in the wilderness only takes a moment, and besides, the ladies have wanted it that way, just as they have for over 1000 years in Scotland.

Blame the women for the fact that nothing is worn under the kilt.Its a fact.

Ancient Scottish society was matrilineal. Men had a duty to be accessable on short notice.And so this is what remains of that culture.I like it.