Appreciate the ping. She’s one of my favorites

Who knew that dopey smoker was an anon?

343 posted on 12/02/2018 1:38:18 PM PST by MileHi (Liberalism is an ideology of parasites, hypocrites, grievance mongers, victims, and control freaks.)
[ Post Reply | Private Reply | To 338 | View Replies]
To: AZLiberty
More deep background, another (free) book by John Coleman: The Rothschild Dynasty. This has some interesting tidbits. For example, a report of an 1876 conversation with Bismarck (the Bismarck), who is quoted to have said:

The division of the United States into two federations was decided long before the Civil War by the High Financial Powers of Europe. Those bankers were afraid of the United States, if they remained in one block and as one nation would attain economical and financial independence, which would upset their domination over the World. The voice of the Rothschilds predominated. They saw tremendous booty if they substituted two feeble democracies indebted to them, to the vigorous Republic, confident and self-providing.

Lincoln never suspected these underground machinations. He was Anti-Slaverist, and he was elected as such. But his character prevented him from being the man of one party. When he had affairs in his hands, he perceived that these sinister financiers of Europe, the Rothschilds, wanted him to be the executor of their designs. They made the rupture between the North and the South imminent! The Masters of Finance in Europe made this rupture definitive in order to exploit it to the utmost...

Lincoln's personality surprised them. They thought to easily dupe the candidate woodcutter. His candidature did not trouble them. But Lincoln read their plots and soon understood that the South was not the worst foe, but the financiers. He did not confide his apprehensions; he watched the gestures of the Hidden Hand. He did not wish to expose publicly which would disconcert the ignorant masses.

He decided to eliminate the International Bankers by establishing a system of loans, allowing the states to borrow directly from the people without intermediary.

He did not study finance, but his robust good sense revealed to him, that the source of any wealth, resides in the work and the economy of the nation. He opposed emissions through the International Financiers. He obtained from Congress the right to borrow from the people by selling to it the bonds of States.

That is to say, the War Between the States was set up by the Rothschilds to prevent the United States from becoming a world power. By strength of character and common sense, Lincoln foiled them -- and hence had to be killed.

Lots of sauce with this book, which also blames the [Y] family for the French Revolution, the Federal Reserve, WWI, and the Russian Revolution (where the book ends chronologically).

Maybe if they asked Trump the question, he would reveal the whole Plan, with all evidence, and then the media COULDN’T accuse him of being a kook.

>>Or, at least, with better categorized and connected mush.

Interesting take on the movie “Caddyshack” and how it predicted our current political climate...
A 1980 movie predicted the ongoing battle for control between Trump and Old Establishment Types

Thanks for the recommendation, USMC79to83.... AND for the link!

I had not realized that parallel.... great catch!

FWIW: I am interpreting the plentiful Q-Drops the last 24 hours and the ones the last few hours as persistent, diligent, extended PREPPING for a dramatic week ahead. Kind of a set-up for up-coming attractions. Anyone else have that impression? 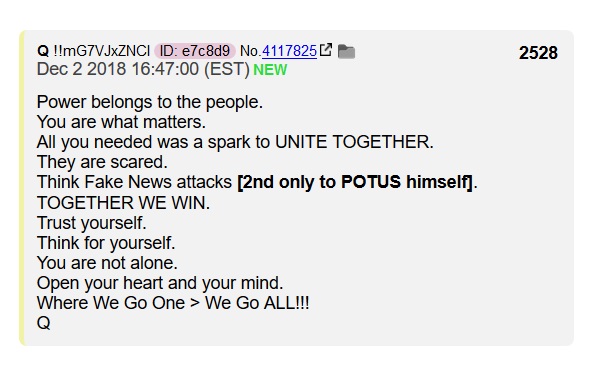 And I know what a pall is and I want one on my casket rather than flowers I think.

I do think someone on the Q team is very into numerology. The obscure number patterns help them set the events to appear random, but proceed in a pattern that Qanon understands. They can use number patterns to communicate with others without risking an obvious communication.

>>Kind of a set-up for up-coming attractions

Do get that impression, but I’ve felt burned so many times before that I’m sitting back trying to not get excited.

FWIW: I am interpreting the plentiful Q-Drops the last 24 hours and the ones the last few hours as persistent, diligent, extended PREPPING for a dramatic week ahead. Kind of a set-up for up-coming attractions. Anyone else have that impression?

I do. Seems like a pep talk before it all starts. I keep holding my breath waiting for it to start. Need to go help the husband with yard work and work off some nervous energy.

358 posted on 12/02/2018 1:53:39 PM PST by TXBubba ( Democrats: If they don't abort you then they will tax you to death.)
[ Post Reply | Private Reply | To 353 | View Replies]
To: AZLiberty
The Rothschild Dynasty appears to have been published in 2006, and the introductory material mentions the war in Iraq. The final paragraph of the book is this:

In conclusion how amazing it is, that the same leaders of the elite of the world, who have the power to excite wars for their own benefits, can also break and consign to obscurity, those formerly important national leaders who oppose their grand designs, particularly their plans to establish a New World Order operation inside a World structure of a single One World Government dictatorship. Unless a counter force can be erected to oppose these plans, the world could very well be plunged into the darkness of a brutal dictatorship by the year 2025.