Just found this photo from Communist North Korea from several days ago apparantly during one of dictator Kim Jong il's "on the spot guidance tours". 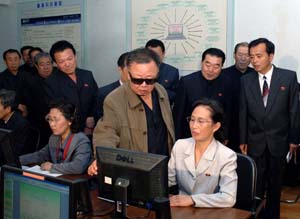 Note the manufacturer of the computer monitor (and presumably the hard drive itself) (Dell Computer, Round Rock, Texas, USA), which General Secretary Kim Jong-il is inspecting.

Link to article on North Korean news through Japanese website:

I found these photos today on the KCNA website out of Pyongyang, and some Japanese websites of North Korean origin.

"Trading with the Enemy Act" (12 U.S.C. § 95a) may or may not apply in this case--as this is primarily directed at Cuba, but certainly the provision of technical products to the DPRK for North Korea's chemical weapons program is going to raise a lot of eyebrows, as well as serious questions.

If utilizing this thread elsewhere, please quote specifically the work of AiT and FREE REPUBLIC, and link to this original thread, where this story has initially appeared (25 May 2010). 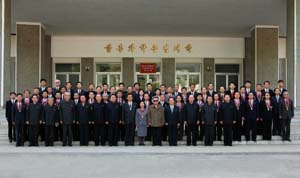 Tiger, here’s a good one.

Does Dell sell to China?
Did China sell the Dell computers to N. Korea or did N. Korea buy directly from Dell?

A statement from Dell headquarters in the USA should be forthcoming. They should (or better have) an explanation.

Thanks American in Tokyo and thanks for the ping.

It may also be that the North Korean Navy (which attacked and sunk the Cheonan corvette of the South Korean Navy), may well also be a happy customer of DELL Computer, as photos were also shown last year which indicated DELL products. See below. Something really is fishy here, if you ask me; it does not pass the smell test as far as I am initially concerned: 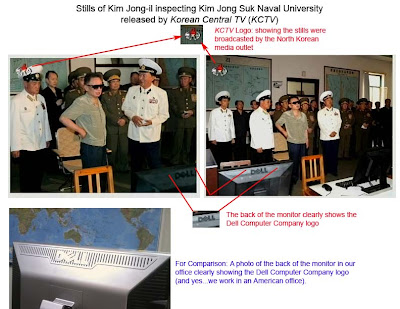 What makes this potentially very damaging is that international intelligence has generally identified the location where the DELL computer were, as a North Korean WMD facility.

Looking forward to what Dell has to say about this.

You think Dell can control where their computers get exported by third parties?

Dell’s are sold all over the world. Once purchased by a third party it is impossible to control who the third party transfers it to.

Dell has no way to control what third parties do.

Control Data Corporation in the 1970s (Cyber 76) got in a LOT of trouble over this kind of thing. (So did Toshiba Machinery for that matter).

You think Dell can control this?

Slandering Dell for nothing they have control over.

You should know better.

Ummm....Dell doesn’t have a force of 50,000 mind-reading police that rappel down your walls and come in through your windows if you’re one of the millions of people that have bought a Dell, but you’re thinking of reselling it to North Korea?

Or are you an employee or a supplier?

Why the dramatic response to this thread?

16 posted on 05/25/2010 1:21:55 AM PDT by AmericanInTokyo
[ Post Reply | Private Reply | To 14 | View Replies]
To: AmericanInTokyo
It is possible that they are obtained second-hand from other countries. They are known to import used cars and computers from China and Japan. If those machines are brand new imports, NK could be running some front company to get them or getting them through their friendly intermediaries(of Chinese or other nationality.)

If DELL knew about their brand-new computers heading for N. Korea, now that is a problem.

17 posted on 05/25/2010 1:22:04 AM PDT by TigerLikesRooster (The way to crush the bourgeois is to grind them between the millstones of taxation and inflation)
[ Post Reply | Private Reply | To 2 | View Replies]
To: AmericanInTokyo

A big difference between mainframes and specialized manufacturing equipment, and a consumer commodity.

I suspect this will become an issue (this story).

You on some kind of drugs?

Not even remotely the same thing.

There are literally millions of Dell’s sold every year all over the world.

It is impossible for Dell to control exportation of a jellybean computer once sold.