Agreed about Brazile - my wife and I change the channel the second she appears. She has nothing truthful to add to any conversation, in my opinion.

I’m sick of paying billions for ‘intelligence’ to gather information so the sh*ts can trade it to the press as if THEY owned the information ....

We paid for the crap - it’s ours to sell.

Let the press bid on the information and sell it directly. Hell, considering these intelligence people are selling our country out for personal gain, we might as well stay true to form and sell our ‘intelligence’ to the world. I’ll bet the twerps are already doing it anyhow.

The Washington Post and New York Times can hire reporters — rather than trading information for power perks from ‘intelligence’ traitors.

Anyone else sick of this crap?

62 posted on 04/21/2019 8:50:24 PM PDT by GOPJ (If illegals voted Republican Pelosi herself would be down at the border laying bricks. freeperbk1000)
[ Post Reply | Private Reply | To 1 | View Replies]
To: BiggBob
Getting fired is one thing. Getting indictments filed against them is another.

Heck, getting fired from the FBI didn't stop comey from getting a book on the best seller for 15 weeks and making (at least) 2 million [1]. He's making the rounds on late night shows and making who know how much appearing on cable "news" shows.

We need these bustards to face more than mearly getting fired.

Can’t wait until the first indictment hits one of the top tier RATs. Comey, Rice, Stzrok....etc. That’s when things will become very interesting.

There is a specific recipe.

But if you don't follow the recipe in the exact order you don't get cake.

You can't start baking the ingredients then add the eggs later it doesn't work.

So The point is until the FBI DOJ etc. Were cleaned out nothing else could move forward. 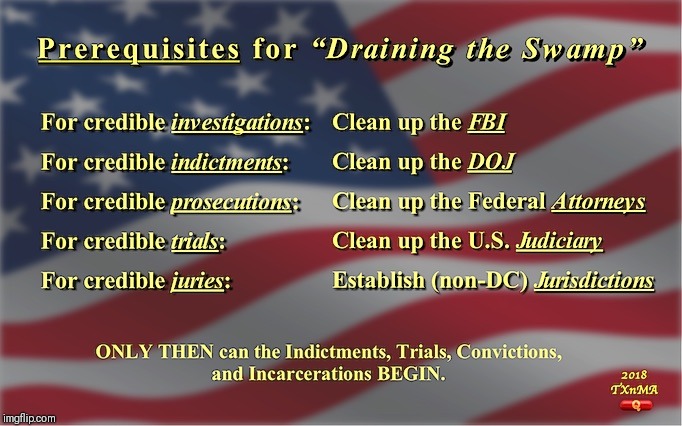 I hope you're right but at the risk of being a self-righteous bore and having the audacity of saying what I think, I don't think we'll see any big name democrats go to jail. To paraphrase Hillary, 'jail is for the little people.'

Again, I hope you're right but until institutions that control government and thought change, i.e., until the hearts and minds of those running those institutions change - a great number of Americans will continue to be governed, controlled and influenced by anti-Americans, seditionists and traitors, IMHBSO - 'In my humble, boring, self-righteous opinion.'.

If any big-name democrat goes to jail in my lifetime, I will gladly shout out kudos for your accurate prediction !! Until then, I'll be sleeping.

Awgie, you would be right to criticize those who complain but do nothing. It may be that we don't always share what we are doing. What I do for the republic may be different than what others are doing. We all have a part to play and they are not all the same.

First and foremost, I pray for those in authority and in influential positions (government, media, education, business, churches). My prayer is that the Lord turn the heart of the wicked in these institutions to Himself and if they do not repent - remove or replace them with men and women who will do His bidding.

I support and do evangelization because the primary problem with the nation is that it is being led and influenced by Christ-less individuals.

"For we are not fighting against flesh-and-blood enemies, but against evil rulers and authorities of the unseen world, against mighty powers in this dark world, and against evil spirits in the heavenly places." " - Ephesians 6:12

I wish you well. Keep up the good fight!

“...Buzzfeed News gives specific details of a Mueller Team leak to them (and others). Including the leaking of copies of FBI investigative notes (FD-302 reports) taken during questioning of Michael Cohen.

“...Leaking an FBI 302 to a reporter is big time crime. Multiple charging 18USC statutes depending on circumstances.
Recall @JusticeOIG Michael Horowitz saying maybe 50 FBI people had accepted improper press inducements (a leak predicate). And he knows their names, although those were not made public (held internally for OPR review)...”

.@OIG has proof from prior review FBI accepted sufficient stuff (expensive dinners, tickets…) According to 5 CFR 6701§503. Not more than $20/incident, not more than $50/year/person (all federal employees).

It's gonna get interesting...

Let’s get this show on the road! Time to quit “playing nice” with these Subversives and start hitting them hard!

Do the Easter Bunny rock?

Now that the witch hunt (should be) over, it's time to quickly ramp up the grand jury indictments.

Firing Coney was just one little step
Do you even listen to what the president says?

Donald J. Trump
@realDonaldTrump
·
Only high crimes and misdemeanors can lead to impeachment. There were no crimes by me (No Collusion, No Obstruction), so you can’t impeach. It was the Democrats that committed the crimes, not your Republican President! Tables are finally turning on the Witch Hunt!

SEAN HANNITY, FOX NEWS: Mr. President, you have the ability to release the FISA applications. There was the original applications, the three subsequent renewal applications. We are told, Andrew McCabe said, no dossier, no FISA warrant. That was a backdoor to your campaign before the election.

The dossier also was leaked to “The Washington Post,” parts of it, and Isikoff and David Corn, to the American people, and, of course, never verified.

Do you have plans to release those FISA applications, Gang of Eight information, the 302s of Bruce Ohr and others, and the five buckets are John Solomon and Sara Carter, as they call it?

PRESIDENT DONALD J. TRUMP: I do, I have plans to declassify and release. I have plans to absolutely release. But I have some very talented people working for me, lawyers. And they really didn’t want me to do it early on.

Devin Nunes, by the way, and Meadows, you look at Jim Jordan, and all of the people, they worked so hard. And a lot of people wanted me to do it a long time ago. I’m glad I didn’t do it. We got a great result without having to do it but we well.

One of the reasons that my lawyers didn’t want me to do it is they said, if I do it, they will call it a form of obstruction, so they will say, oh, you released these documents so we would make all of this information transparent. You know, and politics you always hear transparency. It would make it transparent. And then they call it obstruction, knowing the people we are dealing with.

So, frankly, I thought it would be better if we held it to the end. No, but at the right time, we will be absolutely releasing it. I did the right thing by not doing it so far.

But you understand, they would call it something that it wouldn’t be. It’s the only time you would be transparent where they would say bad things about transparency.

Look no further than the example you gave: "I do, I have plans to declassify and release. I have plans to absolutely release. But I have some very talented people working for me, lawyers. And they really didn’t want me to do it early on."

He's been talking about declassifying for a long time now. What's the excuse now for not doing it? Is he being advised, and taking the advise, to hold it for political reasons closer to 2020? Is that wise? Any number of things can happen between now and then that could damage Trumps popularity with independents and more conservative dems. Trump can't win with (R)'s only. He needs those fence sitters and others. Declassifying now that Mueller's witch hunt is done is the right move. Let's see how long it takes him to do it!

Obviously he can't do all of it alone, but there should be no fewer than a dozen America haters from the previous administration in jail at this very moment. There is no legitimate excuse they are not. Only political cowardice and voting population ignorance.

In the meantime, I will continue to speak out against the cheap talk until something meaningful happens within the legal system.

So I take it you won’t stop whining...

Cause obviously you ignored where Trump said he wouldn’t declassify the info till after the Mueller report or the scumbag Democrats would say he did it to obstruct justice.

Don’t waste my time with another reply

I have no need to hear your negativity and Pearl clutching.

Your post in reply 12 has destroyed all the smoke and mirrors and described the 2016 election shuckin’ and jivin’ with complete clarity.