Navigation: use the links below to view more comments.
first previous 1-20, 21-40, 41-60, 61-76 next last
To: Awgie
Any big mouth arm chair micro schlongers want to wager $100 against my contention that we will see dozens of big name demo-rats INDICTED?
I hope you are correct but the GOP has not given me any reason to believe they are going to do anything.
41 posted on 04/21/2019 2:09:34 PM PDT by Xenodamus (The tree of liberty must be refreshed from time to time with the blood of patriots and tyrants. -TJ)
[ Post Reply | Private Reply | To 34 | View Replies]
To: E. Pluribus Unum

That’s going to run this country out of popcorn. 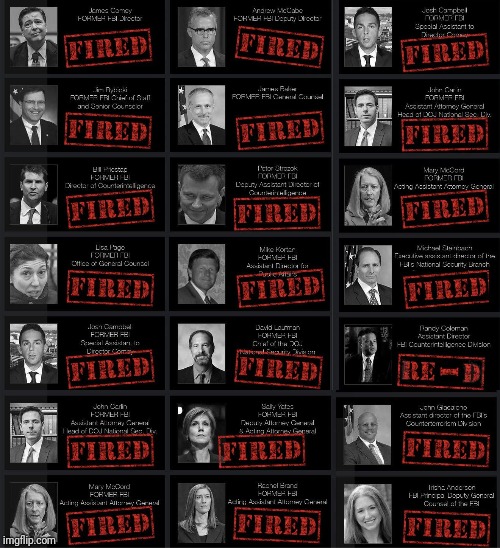 Maybe now that they have all been fired and replaced things can move forward... Nah I'm sure all the whiners are right nothing is happening. LOL

We all hope, we all pray and we all day dream of the day these criminals whose salaries we provided while they corrupted the highest echelons of our government from the Oval Office through the very offices that were supposed to be preventing the very action they undertook are brought to justice but I have never believed justice would be served on these perps beginning with Jeff “Pogo’ Sessions recusal.

Should have been an investigation and hearings many years ago, and most definitely during the Obama regime, and during Clintons campaign, namely Donna Brazile and CNN. If this were to happen, we would find rampant corruption, bribery, blackmail, and payoffs between the democrats and media.

Holder, Lynch, Yates, Rice still need to be added to the Twenty Most Wanted posters.

47 posted on 04/21/2019 3:52:32 PM PDT by Robert A Cook PE (The democrats' national goal: One world social-communism under one world religion: Atheistic Islam.)
[ Post Reply | Private Reply | To 43 | View Replies]
To: Robert A Cook PE
Holder, Lynch, Yates, Rice still need to be added to the Twenty Most Wanted posters.

No one will go to jail—its a mediocracy—the Leftist Commie Media really runs the Democratic Party.

Obama, what do you know and when did you know it?

When Hillary hit the skids, the Clinton Foundation went down too. The Collusiongate hoax was an effort to remove Trump from office and ultimately short-circuit the Constitutional mandate that would give VP Pence the Presidency. They wanted to remove Trump and give it directly to Hillary. Civil War II would be going on right now.

And money was given to media to say and write what they were told to.

According to Sara Carter, DC vermin are rating out each other. I wonder if FBI will rat out MSM or the MSM rats out FBI agents. Comments anyone?

I’ll believe it when I see it.

Praying it is so.

“According to Sara Carter, DC vermin are rating out each other.“

My money is on Page. Hell hath no fury and all that.

That’s Hannity’s constant spiel — that the FBI rank-and-file are honorable people. And he proudly wears his little FBI lapel pin. Unless I learn that some of the rank-and-file are helping Trump, I say they’re all as bad as Comey.

“He is talking about the bribery of government officials by media.”

I understand the MSM was giving trips, tickets, etc., to the FBI, CIA and similar.

"People of the same trade,” according to Adam Smith, "seldom meet together, even for merriment and diversion, but the conversation ends in a conspiracy against the public, or in some contrivance to raise prices.” And journalists “meet together,” virtually, over the AP “wire” and all other wire services. And the “meeting” goes on continually, decade after decade, since before the Civil War in the case of the AP.

A “conspiracy against the public,” therefore, became inevitable a long time ago. And what else would journalists who were conspiring against the public do but to propagandize in favor of their own self-interest? They propagandize in favor of their own self-proclaimed objectivity, even knowing that their focus is on bad news. Knowing, that is, that journalism is negative. And only a cynic would claim that “negativity is objectivity.”

Since journalism is cynical about society, it is correspondingly naive about the institution - government - which exists to discipline evil in society. Journalists following their own incentives, therefore, tend to produce socialist propaganda.

The Sullivan decision overreached in “protecting freedom of the press” at the expense of the right, existing and recognized at the founding and thus covered by the Tenth Amendment, of any person (in or out of government) to sue for libel. Also, Sullivan did not consider that journalism was a monopolistic "conspiracy against the public” precisely to propagandize in favor of big government, and thus specifically against conservatives. Mr. Sullivan was not a Republican, but as a southern Democrat of that era he would be considered a (dis)honorable Republican by the press and by Democrats. See "Duke, David.” The point is that the Sullivan decision has clear political import because Democrats don’t get libeled. And therefore conservatives and Republicans are actually the target of Sullivan's strictures.

59 posted on 04/21/2019 8:04:21 PM PDT by conservatism_IS_compassion (Socialism is cynicism directed towards society and - correspondingly - naivete towards government.)
[ Post Reply | Private Reply | To 5 | View Replies]
To: E. Pluribus Unum
PRISON. No excuses not to prosecute.

A freakin' ADIDAS exec got 9 months for offering favors to college b-ball players. BOTH journalists AND FBI officials on the take should get at least a year in jail. I would settle for soyboy journalists making deals to rat out every agent involved.