I know there’s lots of other news out there about the Won’s.

Butt I didn’t want to give short shrift to this year’s Presidential Medal of Freedom Awards.

And that brings me to Bob Dylan, né Robert Zimmerman. That’s right, another white Hispanic.

…why are you wasting our time on an irrelevant old leftie protest singer?

I mean, he was soooo cool! Heck, he practically invented the “change” part of HOPE and CHANGE.

Butt fewer people, including Big Guy, ever went beyond the persona of the early Dylan to see how he, shall we say, “evolved.” Indeed, as early as 1965 he was smart enough to have figured out how rackets work, and to know that he was caught in one. His epiphany had begun, and My Back Pages was the result. Go listen to a great rendition of it on Gerard’s site. He has all the lyrics posted too.

A self-ordained professor's tongue Too serious to fool Spouted out that liberty Is just equality in school "Equality," I spoke the word As if a wedding vow. Ah, but I was so much older then, I'm younger than that now.

It seems that by age 24, and much to the left’s dismay, Bobby was already “evolving” away for the authoritarianism at the heart of the “protest and liberation” movement and the smug self-righteousness he saw there. They pretended for a long time that his lyrics didn’t mean what they meant, butt what they wanted them to mean.

Bobby’s probably not a closet conservative, butt I’m fairly sure he’s a closet libertarian. Definitely not the social justice protest icon the left has frozen him in time to be.

I was going to click on the link for the full article, but the “clever by half” writing style is a turn off. Tiresome. Maybe next time. 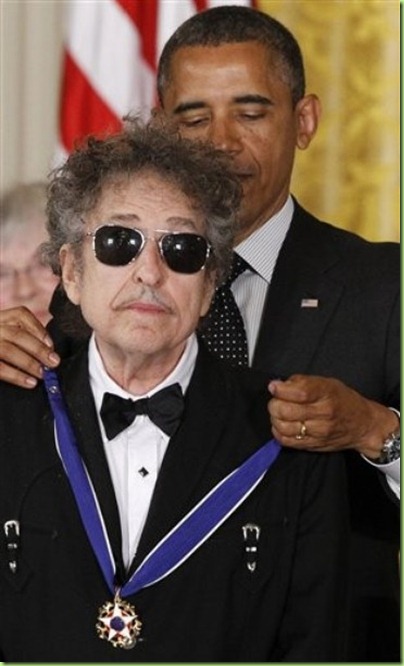 Minnesota People’s Radio did a show about his early years when he attended the U of Mn. Interviewed a woman who dated him.

She said he never bathed and his teeth were so yellow she never kissed him. Said he was only interested in her father’s record collection.

I think Dylan wrote the best response to “post-presidency” Obama in 1965:

Once upon a time you dressed so fine
You threw the bums a dime in your prime, didn’t you ?
People’d call, say, “Beware doll, you’re bound to fall”
You thought they were all kiddin’ you
You used to laugh about
Everybody that was hangin’ out
Now you don’t talk so loud
Now you don’t seem so proud
About having to be scrounging for your next meal.

You’ve gone to the finest school all right, Miss Lonely
But you know you only used to get juiced in it
And nobody has ever taught you how to live on the street
And now you find out you’re gonna have to get used to it
You said you’d never compromise
With the mystery tramp, but know you realize
He’s not selling any alibis
As you stare into the vacuum of his eyes
And say do you want to make a deal?

How does it feel
How does it feel
To be on your own
With no direction home
Like a complete unknown
Like a rolling stone ?
You never turned around to see the frowns on the jugglers and the clowns
When they all come down and did tricks for you
You never understood that it ain’t no good
You shouldn’t let other people get your kicks for you
You used to ride on the chrome horse with your diplomat
Who carried on his shoulder a Siamese cat
Ain’t it hard when you discover that
He really wasn’t where it’s at
After he took from you everything he could steal.

Princess on the steeple and all the pretty people
They’re drinkin’, thinkin’ that they got it made
Exchanging all precious gifts
But you’d better take your diamond ring, you’d better pawn it babe
You used to be so amused
At Napoleon in rags and the language that he used
Go to him now, he calls you, you can’t refuse
When you got nothing, you got nothing to lose
You’re invisible now, you got no secrets to conceal.

LARS is my all time fav rock-and-or-roll song...but this is a good un, too! The concert hnoring Dylan that featured Harrison, McQuinn, Petty, Young, et al doing “My Back Pages” was extraordinary!

Crimson flames tied through my ears
Rollin’ high and mighty traps
Pounced with fire on flaming roads
Using ideas as my maps
“We’ll meet on edges, soon,” said I
Proud ’neath heated brow
Ah, but I was so much older then
I’m younger than that now

Half-wracked prejudice leaped forth
“Rip down all hate,” I screamed
Lies that life is black and white
Spoke from my skull. I dreamed
Romantic facts of musketeers
Foundationed deep, somehow
Ah, but I was so much older then
I’m younger than that now

Girls’ faces formed the forward path
From phony jealousy
To memorizing politics
Of ancient history
Flung down by corpse evangelists
Unthought of, though, somehow
Ah, but I was so much older then
I’m younger than that now

A self-ordained professor’s tongue
Too serious to fool
Spouted out that liberty
Is just equality in school
“Equality,” I spoke the word
As if a wedding vow
Ah, but I was so much older then
I’m younger than that now

In a soldier’s stance, I aimed my hand
At the mongrel dogs who teach
Fearing not that I’d become my enemy
In the instant that I preach
My pathway led by confusion boats
Mutiny from stern to bow
Ah, but I was so much older then
I’m younger than that now

Yes, my guard stood hard when abstract threats
Too noble to neglect
Deceived me into thinking
I had something to protect
Good and bad, I define these terms
Quite clear, no doubt, somehow
Ah, but I was so much older then
I’m younger than that now

I wonder if Obama understands this Dylan line...

Your ‘butt’ is really hanging out on this one.

Exactly. Of course we could go on all night. With Dylan’s incredible ability to unmask hypocrisy and reveal human nature we could put half his catalogue up here and still be on target with Obama.

You must pick up one or the other Though neither of them are to be what they claim.

You’re Gonna Make Me Lonesome When You Go will never apply to Obama.

I agree. Just reading the excerpt gave me a headache.

I ain’t gonna work on Maggie’s farm no more

There was a reason he sang that at Newport

Same as the reason he came back with It’s All Over Now, Baby Blue. You can change the instruments and the style, but the message was the same.