* Two Israelis are nabbed --as they lost their way-- by the "Palestinian" Police who beat them brutally.

* They then handed over the men to a mob to lynch, while they watch the scene.

* One "proud" Arab-Muslim “hero” had his hands covered in the blood of the Israelis and waved in a bragging manner through the window to the larger crowd anxiously waiting in the public square.

(* They were put on military clothes afterwards.)

* An Israeli is thrown out the window into the bloodthirsty [literally] mob waiting.

* They were beaten, stabbed to death, their faces disfigured...

* Their bodies were mutilated the 'mainstream' Arab-Muslim "Palestinians" screamed in ecstasy, moaning in beasty manners while waving the body parts in "joy"... all that savagery in broad day light in public square.

* The shameless pride doesn't end there, their kids are --later on-- taught to "cherish" such 'blood-cult' via glorifying the act in portraying a starring girl dipping in blood, all "for the cause."

* It also marked the worsening conditions for any journalist in their areas, intimidation into telling, reporting 'their version' of "truth."

* Just like the Arab-Palestinian dancing, celebrating the 9/11 Islamic massacre of 3,000 innocent people, the PA [Pallywood] tried to suppress the lynch from the world, first they denied it, but as the photos shot by an Italian crew already [exposed their true character] shocked the world, they quickly switched gears and attempted to lie that the Israelis were nabbed on "suspicion of spying... or something.

The lynching of: Vadim Norzhich and Yosef Avrahami.

On October 12, 2000, two non-combatant Israeli.. were lynched and brutally murdered by a Palestinian mob in Ramallah. Both were drivers, one aged 38 and the father of three, the other a 33 year-old newly-wed.

Since this lynching, the official Palestinian broadcasting stations have made every effort to hide the horrible pictures which were shown around the world.

According to reporters' evidence on the scene, not only did the Palestinian police not protect the two men slaughtered while in their custody in the Ramallah police station, but they also tried to prevent foreign journalists in the area around the building from filming the incident.

Despite the attempts to distance reports, an Italian television crew managed to film several scenes.

The following is an ad published in the Al Hayat Al Jadidah newspaper, considered the main newspaper of the Palestinian Authority. The ad, probably paid for, is evidence of the double standard which has come to characterize much of the reporting of the recent violence in the territories.

A British photographer working on a pictorial study of Palestinian refugees stumbled on the event after the initial attack in the Ramallah police station. He did not witness that aspect. He subsequently described what he did see in The Sunday Telegraph, a respected British daily newspaper. The following is an extract:

"I had arrived in Ramallah at about 10.30 in the morning and was getting into a taxi on the main road to go to Nablus, where there was to be a funeral that I wanted to film, when all of a sudden there came a big crowd of Palestinians shouting and running down the hill from the police station.

I thought he was a soldier because I could see the remains of the khaki trousers and boots. My God, I thought, they've killed this guy. He was dead, he must have been dead, but they were still beating him, madly, kicking his head. They were like animals.

They were just a few feet in front of me and I could see everything. Instinctively, I reached for my camera. I was composing the picture when I was punched in the face by a Palestinian. Another Palestinian pointed right at me shouting 'no picture, no picture!', while another guy hit me in the face and said 'give me your film!'

I tried to get the film out but they were all grabbing me and the one guy just pulled the camera off me and smashed it to the floor. I knew I had lost the chance to take the photograph that would have made me famous and I had lost my favourite lens that I'd used all over the world, but I didn't care. I was scared for my life.

At the same time, the guy that looked like a soldier was being beaten and the crowd was getting angrier and angrier, shouting 'Allah akbar' - God is great. They were dragging the dead man around the street like a cat toying with a mouse. It was the most horrible thing that I have ever seen and I have reported from Congo, Kosovo, many bad places. In Kosovo, I saw Serbs beating an Albanian but it wasn't like this. There was such hatred, such unbelievable hatred and anger distorting their faces.

The worst thing was that I realised the anger that they were directing at me was the same as that which they'd had toward the soldier before dragging him from the police station and killing him. Somehow I escaped and ran and ran not knowing where I was going. I never saw the other guy they killed, the one they threw out of the window.

I thought that I'd got to know the Palestinians well. I've made six trips this year and had been going to Ramallah every day for the past 16 days. I thought they were kind, hospitable people. I know they are not all like this and I'm a very forgiving person but I'll never forget this. It was murder of the most barbaric kind. When I think about it, I see that man's head, all smashed. I know that I'll have nightmares for the rest of my life."
http://www.jewishvirtuallibrary.org/jsource/History/lynchwit.html

Arabs Lynch Jews at Ramallah. What Else Is New!Arabs are cruel and heartless butchers of Jews. For example, the Lynching at Ramallah.
http://www.masada2000.org/ramallah.html

Ramallah-Lynch Terrorist Nabbed - Defense/Middle East - Israel ... Sep 26, 2007 ... TV images of the lynching show a body of one of the two Israelis being ... his blood-soaked hands out the window of the PA police station. ...
http://www.israelnationalnews.com/News/News.aspx/123789

How Palestinians intimidate the press into suppressing unfavorable coverage...Journalists describe constant Palestinian intimidation The lynching of two Israeli reservists in Ramallah last October proved to be a watershed in coverage of the new intifada. Up until that point, most Western ...
http://www.eretzyisroel.org/~jkatz/intimidation.html

BBC NEWS | Middle East | Man jailed over Ramallah lynching Nov 22, 2004 ... A Palestinian man who waved bloody hands at a cheering mob is jailed for the murder of an Israeli soldier.
http://news.bbc.co.uk/2/hi/middle_east/4033901.stm

The Middle East, abstracts and index Library Information and Research Service [ Part 2] - 2006 [page 1]
...the lynching the Arabs ... carried out in Ramallah was not done by guns, Arabs stabbed to death two Israeli soldiers that were being detained at an Arab police station. They had tossed their bodies out through a window to a mob below. Whereupon that mob inhuamnely further stabbed and stamped upon the dead soldiers and disgracefuly dragged their bodies through the streets of Ramallah. Their acts showed the deapth of the Arab hatred of the Jews and the bitter fruit of Arab education... It appeared indeed to be a calculated act of violence, while the permissive PA police stood by and watched. Unfortunately, such inhumane acts are not atypical of Arab violence...
http://books.google.com/books?&id=vK1tAAAAMAAJ&dq=atypical

Scenes From Israel... Vadim was lynched in Ramalla One of the ... Blood on his hands, a Palestinian savage waves to the crowd after lynching ...
http://www.chayas.com/media.htm

A Wrong Turn In Ramallah, Reflections On A Savage People
http://www.danielpipes.org/comments/31585

In Ramallah in 2000, two Israeli soldiers were kidnapped, beaten, stabbed countless times, had their eyes gouged out, and were literally disemboweled and dismembered by an Arab lynch mob.

The people - and I use the term loosely - who carried out the initial beatings threw one of the victims down to the waiting mob, where his face was further crushed with stones, feet, fists and even a heavy metal window frame. One Jew was set on fire and dragged along the street as Arab onlookers danced and cheered. Some of the butchers celebrated their crimes with the victims' internal organs. One of the killers, famously captured on film, proudly displayed his blood-soaked hands to the cheering Ramallah crowd.

And it gets worse. In 2003, nearly two years later, Arab parents in Gaza cheered again when their little children dressed up as members of the Ramallah lynch mob, complete with hands painted blood red, for a kindergarten http://www.israelnationalnews.com/Articles/Article.aspx/3732graduation ceremony...
http://www.israelnationalnews.com/Articles/Article.aspx/3732

When two Israelis were tortured and lynched to death by a Palestinian Arab mob (including Palestinian Authority policemen) in Ramallah in October 2000, Ashrawi justified the murder by falsely claiming that the Israelis were "undercover Israeli agents" who "were clearly infiltrated and planted into the midst of a protest march in the heart of the city." (In fact, the Israelis were driving near the city, took a wrong turn, and were stopped by PA policemen, who arrested them, brought them into the city, and handed them over to the lynch mob.) (Jordan Times, October 29, 2000)
http://www.campus-watch.org/article/id/69

Gaza kindergarten graduation celebrates lynching of Jews - Likud ... Jul 1, 2002... of the scene at the lynching of two Jewish reservists in Ramallah, ... its youngsters dressed up as members of a Ramallah lynch mob, ...
http://www.likud.nl/extr209.html

FactsOfIsrael.com: Palestinian kid is taught how to dip her hands ... Jun 24, 2002 ... A mob of Palestinian savages stormed in the PA police station and ... in the manner of one of the perpetrators of the Ramallah lynching, ...
http://www.factsofisrael.com/blog/archives/000123.html

This girl raises her 'bloody' hands in homage to the grotesque picture of the Ramallah lynch mob that tore three Israeli reserve soldiers to pieces in ...
http://www.kerenmalki.org/Doing_Something_Positive.htm 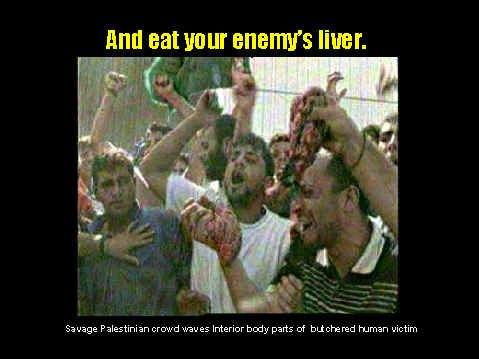 I hope the Israeli’s retaliated severely for this case of brutality.

I think they should have renovated that whole block with Mark 84’s.

Note: The previous posting (of it) included a link to a certain source which was not in accordance with FR’s satisfaction, the current posting excluded that source.
Thanks.

I hope so too, I think that another “Munich” film would be issued afterwards...

Carpet bomb the place and get it over with Israel. It’s easier to ask forgivness than it is to ask permission!

Check out the book “Islam is of the Devil”

This is the enemy... This is the Enemy - Op-Eds - Israel National News May 30, 2004 ... During the lynch of the two IDF soldiers who had taken a wrong turn into Ramallah in 2000, one of the Arab murderers paused in his savage ...
http://www.israelnationalnews.com/Articles/Article.aspx/3732

I wonder why there is no peace in the Mideast?

After all, they are just like you and I, if you and I were some mutant freaks of nature who only resembled human beings.

Oh, wait, I’ll answer my own question. There is no peace because some Jews are renovating their bathrooms and some are even building whole new apartments in Jerusalem. Yeah, that’s it.

13 posted on 07/28/2010 11:54:58 AM PDT by HearMe
[ Post Reply | Private Reply | To 1 | View Replies]
To: PRePublic
palestinian "collaborators"---killed by their own. Dragged through the streets and shot and hung upside down and carved. One image which is unusually graphic, shows children burning a man repeatedly with lit cigarettes. The man, who was still alive, was lying in the street surrounded by thugs with rifles pointed at him. I will not post it, but the children were very young, some even preschool.

I remember when this happened. It reminded me of the two Irish/British policemen who were beaten to death by IRA supporters when they also took a wrong turn. Not surprisingly, many IRA people support the Pally’s.

They blow up so fast.

I have always been in favor of the Roman solution. See New Carthage.