Nearly four-out-of-10 voters believe Joe Biden has dementia. Most voters, including just over half of Democrats, feel it is important for the likely Democratic presidential nominee to publicly address the issue.

The latest Rasmussen Reports national telephone and online survey finds that 38% of Likely U.S. Voters think Biden is suffering from some form of dementia.

Twenty percent (20%) of voters in his own party think Biden has dementia. But that compares to 66% of Republicans and 30% of voters not affiliated with either major party.

Critics contend that Biden’s frequent gaffes and confusing statements suggest he has dementia. Sixty-one percent (61%) of all voters believe it is important for Biden to address the dementia issue publicly, with 41% who say it is Very Important. Thirty-six percent (36%) say it is not important for Biden to speak out on the issue, including 19% who feel it is Not at All Important.

It is important to note that Rasmussen Reports did not define “dementia” in its questions. According to the Merriam-Webster dictionary, dementia is “a usually progressive condition (such as Alzheimer’s disease) marked by the development of multiple cognitive deficits (such as memory impairment, aphasia and the inability to plan and initiate complex behavior).”

This will percolate and should prevent Biden from hiding out. He’ll have to to get out in some controlled settings, hopefully with real questions being asked. Lots to ask: Rape, bribes, and so much more.

First line in the article:

No problem. Joe is beating the pants off Trump in the polls. /s

Must be Jeb! Common Core Math.

1.a) Should a serial plagiarizer be trusted with the Presidency?
2.a) Should a child molester be able to run for President?

1.b) When did you stop plagiarizing?
2.b) Will LITTLE GIRLS be safe around you anytime soon?

“Joe in all of his dementia glory, all of it, has not been hammered home _yet_”
—
I suspect it’s best for Trump not to diagnose and attack Biden re:”dementia”.
Instead, just let Joe talk and people can easily see what’s what with his mental condition.

Aye. There it is. That being said I'll bet the number is much higher than that. Across all political parties. 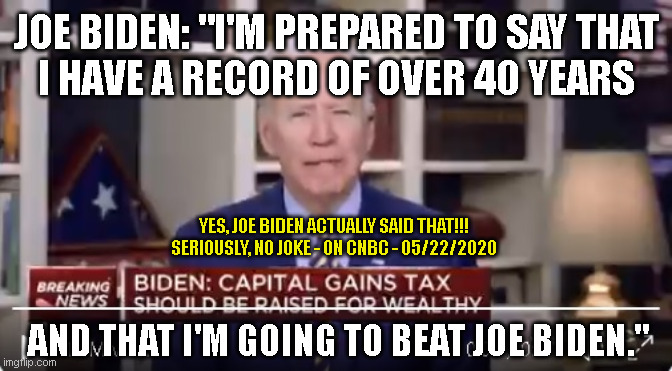 80% only believe what they are told by their “superiors.”

How many Dems see Cuba and venesuela as success?

Amazing how stupid 80% of Democrats are willing to admit to being.

The Dems believe the polls Biden’s way ahead. It will be too late to replace him by the time they realize he’s unelectable.

Yes. You’re asking a group of people whose elder members have been on Prozac for decades and whose younger members grew up on Ritalin and Adderal to evaluate someone on Ativan.

I think being dead kind of precludes the whole dementia premise.

If you’re dead, you’re a demon-rat by definition, correct?

Ok, thanks for the correction.
But, betcha the REAL percantage for Dims is closer to 40% than %20.

Biden said he could see Russia from his celler.