(Repost) As I Have Been Screeching for Years, Timothy Dolan is an Unmitigated Jackass (Donkey)
Barnhardt Blog ^ | Ann Barnhardt

This is an exerpt:

“The road to hell is paved with the skulls of bishops.”
Saint John Eudes, attributed.4

“It must be observed, however, that if the faith were endangered, a subject ought to rebuke his prelate even publicly.”
St. Thomas Aquinas, Summa Theologica II, II, q. 33, a. 45

“Augustine says in his Rule: ‘Show mercy not only to yourselves, but also to him who, being in the higher position among you, is therefore in greater danger.’ But fraternal correction is a work of mercy. Therefore even prelates ought to be corrected.”
St. Thomas Aquinas, Summa Theologica II, II, q. 33, a. 4, Sed Contra.

“It is better that scandals arise than the truth be suppressed.”
Pope St. Gregory the Great 6

“But, when necessity compels, not those only who are invested with power of rule are bound to safeguard the integrity of faith, but, as St. Thomas maintains: ‘Each one is under obligation to show forth his faith, either to instruct and encourage others of the faithful, or to repel the attacks of unbelievers.’”
Pope Leo XIII7

“The floor of hell is paved with the skulls of bishops!” ~St. John Chrysostom

Woe to the pastors, that destroy and tear the sheep of my pasture, saith the Lord.

44 posted on 03/12/2014 12:52:51 PM PDT by BlatherNaut
[ Post Reply | Private Reply | To 1 | View Replies]
To: Repent and Believe
On another point: how else does the public become aware of the gravity and depravity of sodomy without a description. People today are so hung up on science and proof of arguments that to leave out the gory details of what sodomy is would be for people to be left in ignorance of the gravity of crime.

I agree with you (and Ann, and the Duck Commander).

By what construct does a portion of my output “belong” to Caesar?

Ah, 'tis the Dolan Boy! This is what watching Dennis Day/Bing Crosby/Pat O'Brien re-reruns can do to an impressionable NYC Catholic Irish boyo of the 50's. Met a million of'em.

Dolan was not chosen by the Pope. O no. He was sent over by 1930s Central Casting as a "Stage Irishman" of the olde school. Bet he knows a thousand Pat and Mike jokes, begorrah! That includes the one which ends ".... bajasus, the Bishop is pregnant!"

At least we know where he probably is ... at home in the episcopal palace watching "The Quiet Man" on VHS. Why didn't they make this fool Archbishop of Boston, where the faux-Irish Brogue-and-all IRA boolshiite still plays well ... so well that John Kerry convinced them HE was Irish!

“Not very adequate, but it's better than assault and battery on a priest, which would be a pretty serious canonical delict.”

Timothy Dolan laughs after being elected president of the U.S. Conference of Catholic Bishops. Yes, if minor, it is not necessary, as the Bible shows.

Yet attributing words of tradition to the Lord is profane:

Blessed Lord Himself told St. Catherine of Siena that it makes Him NAUSEOUS and that even the demons withdraw from it because it is so sick and twisted that their angelic natures – demonic as they are – cannot stand to look upon it or be near it.

There is zero evidence the demons are repulsed by this, any more than they are to swine, or even have any virtue, and in fact it is demons who are behind sodomy, not repelled by it.

But Scripture is only a servant for Rome, not her master. and insufficient to support her traditions, thus she can attempt to provide for herself what is needed.

Dolan has now taken it a step further – he HAS in fact JUDGED the sin of sodomy, and has JUDGED it positively. ”Bravo” means “good”. ”Good for him” means GOOD. FOR. HIM.

This is true. There is not such thing as no judging in this sense. The sodomites in Gn. 19 also came out - to get in Lot's door and his holy guests. Who did not say "Bravo."

50 posted on 03/12/2014 2:07:53 PM PDT by daniel1212 (Come to the Lord Jesus as a contrite damned+destitute sinner, trust Him to save you, then live 4 Him)
[ Post Reply | Private Reply | To 3 | View Replies]
To: daniel1212; Alex Murphy; Repent and Believe
Just for the sake of accuracy: the fact that Ann Barnhardt or Catherine of Siena credited a purported vision, does not mean that the vision was accepted as a source of doctrine by the Catholic Church.

In fact, no alleged "private revelations" --- including visions, dreams, infused knowledge, mystical appearances and so forth --- are to be used as sources of doctrine, nor are any of the faithful obliged to believe in them de fide --- not even if the apparent vision or locution was one that you, yourself experienced.

Keeping this in mind will help keep your criticisms of the Church better-defined and more judicious.

Work to change it; Ted Cruz came right out and said abolish the IRS ...

When did you stop paying taxes?

52 posted on 03/12/2014 3:20:27 PM PDT by WildHighlander57 ((WildHighlander57, returning after lurking since 2000))
[ Post Reply | Private Reply | To 46 | View Replies]
To: Mrs. Don-o; redleghunter
Just for the sake of accuracy: the fact that Ann Barnhardt or Catherine of Siena credited a purported vision, does not mean that the vision was accepted as a source of doctrine by the Catholic Church. In fact, no alleged "private revelations" --- including visions, dreams, infused knowledge, mystical appearances and so forth --- are to be used as sources of doctrine

I understand that these are not doctrine, and they are not even supposed to improve or complete what Rome holds as Divine revelation , yet Rome can affirm and use them under the premise that they contribute to a deeper understanding of the faith. However, i was not asserting this was RC doctrine, but the use this PR was consistent with Rome invoking extraBiblical material as being the word of God. And demons being repelled by sodomy is an unwarranted even as an interpretation and contrary to what Scripture does reveal about demons.

In fact the devil, who seeks to pervert what God made good and to imitate the almighty, is the one behind sodomy, thus it is a product of idolatry, making gods according to man's own perverse liking, as well making a perverse sexual union. (Rn. 1:26ff)

And thus the use of this weakens his argument. But instead of reproving this profane tale, RCs repeat it as Scripture is not their supreme authority.

But thank you for to trying to help me keep my criticisms of Rome better-defined and more judicious. That is a worthy goal.

p.s. I still pay taxes under threat of bodily harm and eradication, just like everyone else.

There it is in a nutshell, and look, no replies.

I would be dubious about such a supposed mystical insight, because it was long a homiletic commonplace in the Middle Ages that sodomy was one of the chief sports of demons in hell. It's a constant torture. That, the stink, and of course the heat.

Sodomy being one of the Four Sins Which Cry Out To Heaven For Vengeance (that, plus murder, the oppression of widows and orphans, and depriving a workman of his just wages) -- that's Biblical -- it delights the rebellious bodiless entities by its very repulsiveness. 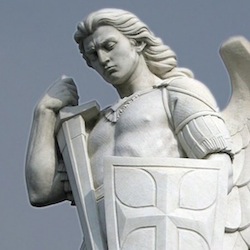 Upthread I said it was the Good Book (&Jesus) that says about taxes “render to Caesar what belongs to Caesar “.

There are a few legitimate functions of government. A portion of your output as needed to fund those functions “belongs to Caesar”.

Those legitimate functions make up about 10% of the current version of the Federal government.

I should be more precise. YHWH wrote them down on stone originally.

I dig the sombrero.