The Rev Bradford G. Whitaker, rector of Christ Episcopal Church of Grosse Pointe, Michigan, writes an open letter to ECUSA's House of Bishops and proves once again that some Episcopal clergymen shouldn't be allowed to say things:

Please stop making my vocation more difficult than it already is. Rather, give me a vision of leadership which will inspire and bring about a unified response to the church’s mission of “restoring all people to unity with God and each other in Christ.”

I serve as rector of Christ Church – Grosse Pointe, Michigan. In general, Grosse Pointe is a politically and fiscally conservative community. Much of its conservative nature is also present in the pews of its various churches. Christ Church, while certainly reflecting the community, also reflects the diversity in regard to the spectrum of theological thought found across our church in this country. We, like all worshipping communities, have had our issues to deal with. Thankfully we have dealt with those on a more local level rather than carrying on about “what General Convention of ’03 has gone and done.”

Generally speaking, when someone prefaces a letter to the editor or a call to a talk show with a phrase along the lines of, "I've been a conservative voter all my life but...," it's fairly safe to assume that that person has a never voted for a conservative in his or her life.   So while Grosse Pointe may be "politically and fiscally conservative," it's a good bet that Christ Church is not.  Particularly when their rector boasts about not being upset about "what General Convention of '03 has gone and done."

However, each time you, the House of Bishops acts out in a manner which - if not immature, is certainly confusing – it causes unsettling waves to spread throughout the church. These waves you make are in no way big enough to topple this wonderful church. But it sure seems as though you, as a body, are bound and determined to do us in.

Is Brad upset about the HOB's dishonest  and evasive response to the Windsor Report?  No, he likes that a lot, thus establishing his liberal credentials beyond a shadow of a doubt.

March 15th, at your House of Bishops’ Spring Meeting at Camp Allen, you produced what I and many of my parishioners and colleagues believed to be a wonderful response to the Windsor Report. This Covenant Statement finally seemed to indicate that you are putting your house in order. I have not been more proud of my bishops in a long time as I was when your covenant statement was released. The work it must have taken you to reach your decisions clearly was Spirit driven. I thanked God you were willing to listen to the Holy Spirit.

So what has Brad's chasuble in a bunch?  This.

However, within three weeks and a day, twenty-one of you chose to act out in a manner certainly not becoming of the previous covenant you all established, by writing to the Archbishop of Canterbury and requesting a meeting with him without notifying your own Presiding Bishop. Often when such behavior occurs those of you on the opposite side of the issue seem only to use the media as a response to your fellow bishops, or act out in an equally unilateral way. Can you imagine the wonderment going on in our pews about such inconsistent behavior? How do you hold one another accountable and responsive to the covenants you establish? What motivates you to remain committed (or not) to these covenant statements? Presently your public behavior implies you are struggling with these concerns. I often wonder if any of you, regardless of your theological positions, ever feel safe in your work together.

I can attest that many persons in our pews do not get anxious about your inconsistent and immature behavior. Rather they just shake their heads in wonderment and in some cases amusement about you. That is truly unfortunate.

Right.  Makes Brad no never mind that in 2003, ECUSA unilaterally jettisoned 2,000 years of church interpretation of Scripture along with every Anglican and Episcopal resolution ever passed on the subject of homosexual activity.  Doesn't bother Brad in the slightest that ECUSA's responses to the crisis it caused have been about as consistently dishonest as it is possible to be.  But Brad claims that people in  the pews are concerned when some bishops try to arrange a meeting with Dr. Williams without telling Frank.  If you believe that, I can get you a really good deal on a Gateway Arch.

And Brad actually has the audacity to ask of the men who went over Frank's head, "How do you hold one another accountable and responsive to the covenants you establish? What motivates you to remain committed (or not) to these covenant statements?"  I wonder why he didn't ask ECUSA, a church which interprets pieces of paper it signs any way it wishes to(see, well, the Covenant Statement Brad's so fond of which interpreted the request for "no homosexual bishops" as "no bishops at all").

Please, on behalf of this individual servant of Christ, I plead my case to you and beg that you indeed endeavor to respect one another and act accordingly. We have work to be done which is impeded by the confusion of covenant making followed by covenant breaking. Christ is waiting and would rather not fail because we, His hands in the world, are too busy acting as immature siblings rather than the faithful servants He calls us to be.

Actually, I don't wonder why Brad didn't ask ECUSA those questions at all.  Look in the mirror when you start tossing around phrases like "immature siblings," Brad.  In the meantime, please stop making the fact that I was born an Episcopalian any more painful than it already is.

UPDATE: One of Kendall Harmon's commenters demolishes the idea that Brad and his parish are any kind of conservatives at all:

If Brad Whitaker is a conservative then things have truly changed in the Episcopal church. This pass Lent Brad’s bishop lenten series first guest was his friend, Bishop Spong. Whitaker came to Grosse Pointe from New Jersey and is close with Spong. Bishop Spong received a standing ovation from Whitaker’s “conservative” parish. Christ Church did have many conservatives until Whitaker came. The bishop sent him a new priest without a vestry vote - a gay man who lives with his lover in a church property house. The conservatives left and went to downtown Detroit to St. John’s.

At Whitaker’s blessing of the animals service you can take your pet up with you to communion and they will receive a treat while your receive communion. 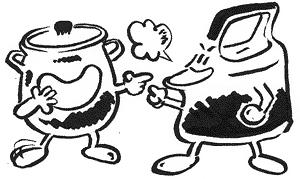 3 posted on 06/08/2005 12:01:54 PM PDT by RockinRight (Conservatism is common sense, liberalism is just senseless.)
[ Post Reply | Private Reply | To 1 | View Replies]
To: sionnsar
proves once again that some Episcopal clergymen shouldn't be allowed to say things

The way this guy says them, though, shows how he gets along in his "conservative" church. His opinions may be 21st century, but his diction makes me feel like I'm reading Dickens!

". . . in a manner certainly not becoming of the previous covenant you all established . . ."

In wonderment, I indeed endeavored, though perhaps not becomingly, to overcome the cognitive dissonance inspired by this!

It bothers me to no end to see people write this way. When Pastors read a prayer they've wrote or such as this write a letter. There is no way on Gods green earth that they naturally speak this way. I hate hearing all those fancy/flowery words...give me some reality. Write and read how you talk.

I lived many years in Grosse Pointe (GP North Grad) and it is indeed very conservative.

What?? Then people will know what he's saying. I hear Talleyrand once said "Language is given to us to conceal our thoughts"; some people take it far too seriously!

But then, Tallyrand was a diplomat. His comment is directly applicable to that entire industry. I suspect it is less useful most other places, times and occupations.

Besides, it's a good joke he told. You ought to laugh. :)