Let it be said before we know the outcome of the war in Iraq that America and the world are inordinately lucky to have George W. Bush as America's president.

In fact, I would go further. To the extent that one is ever able to see the hand of God in history -- and since biblical times, one has never been given certitude in this regard -- I believe that either divine intervention or good luck on the magnitude of a lottery win explains George W. Bush's rise to the position of president.

It is not meant to disparage the character of two decent men, Al Gore and Joseph Lieberman, to say that we should daily get down on our hands and knees in gratitude that George W. Bush, along with Dick Cheney and Condoleezza Rice, has governed our country since 9-11. I am not alone (even many Democrats now agree) in shuddering at the thought of how close we were to having the Democratic Party governing at this time.

Al Gore, I always believed, was more frightening than Bill Clinton. President Clinton loved politics and power, and he did not appear to have a set of core beliefs. This prevented him from ever attaining greatness. But it also prevented him from being dangerous. Gore, on the other hand, did deeply believe in something: the greatest danger to the world was the threat to the natural environment. George W. Bush most fears a different danger to the world: human evil.

Lacking the moral confidence possessed by President Bush, Al Gore and his Democratic Party would have striven for consensus -- arguing, again just as the European moral relativists do, that it is morally right to attack Iraq if the United Nations says it is, but morally wrong if the United Nations says it is not. For the Democratic Party and their European allies, right and wrong are man-made constructs, and therefore U.N. votes determine what is right. George W. Bush argues that morality should never be decided by a U.N. vote, that having Syria, China, Guinea and France determine what is right and wrong and what America should do to protect itself would precipitate the beginning of the end of America and of civilization itself.

George W. Bush believes in a God "who is not neutral" between good and evil, between the torturer and the tortured. The Democratic Party prefers to see God as a deity who shies away from making moral judgments. Or whose judgments are His alone, unknowable to mortals.

George W. Bush believes that America has a God-given mission to be a light to the world and to spread liberty. The Democratic Party believes that such talk is chauvinistic arrogance. They believe, like the French, that the United Nations, not America, should be the most powerful force on earth.

George W. Bush would surely like the world to agree with him and to like him, but, thank God, he is prepared to go it alone and to be hated -- a defining trait of a great leader. Most Democrats believe that America should never go it alone and that if America is widely disliked, America must be wrong. In this regard, George W. Bush is the antithesis of his Democratic predecessor Bill Clinton, for whom being loved was of paramount importance.

George W. Bush is regularly described by American and foreign critics as a "cowboy." They are right, and for this, too, we should thank God. The Europeans and Democrats use that term as an epithet, but for many Americans the image of a lone cowboy fighting bad men is a revered one. Many of us have far more moral confidence in the Lone Ranger than in Jacques Chirac or Kofi Annan.

The Lone Ranger rides again. Thank God he does. 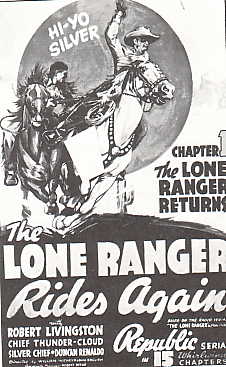 I do believe that the closest anyone will come to realize the loneliness of command that General Eisenhower experienced the first week of June, 1944, will be President Bush the week before Baghdad. I do believe he is up to it.

5 posted on 03/10/2003 9:34:59 PM PST by elbucko (Blued Steel & Polished Walnut)
[ Post Reply | Private Reply | To 1 | View Replies]
To: kattracks
Most Democrats believe that America should never go it alone and that if America is widely disliked, America must be wrong.

This is because, being little more than petty bourgeois aspiring to the phony aristocratic vocabulary acquired in world reknowned (but third rate) universities, they still think that aping every political and fashionable idiocy emanating from Europe is the course of action most likely to win acclaim from their similarly afflicted compatriots.

I don't buy this. Gore has no deep core beliefs. He uses whatever gets the vote.

If he was really true to his cause - he would not have wasted those millions of gallons of water to float his canoe for a photo op.

Actually, twelve years ago, the picture was just as bleak. Perhaps you just didn't know. LOL

14 posted on 03/10/2003 10:21:40 PM PST by Conservababe
[ Post Reply | Private Reply | To 10 | View Replies]
To: chachacha
I can understand your frustration with G.W. for not going it alone already, because I was too! I just like you saw what was coming in the U.N. and knew that it was a big waste of time! But lately I have begun to see the big picture and am sure that Bush knows what he is doing!
I don't find it comforting that it is taking so long, but who has caused this delay? Do you not keep up with political news? It is the good ole Demmocrap/ Communist party who demanded that we Go thru the U.N.! And now they are seeking to try and undermine the administrations efforts even more, by questioning our right to even fight this war; after they approved the action last October!

Yes it could all go Bad! The oil fields will most likley burn . We may indeed have heavy casualties. But our servicemen are aware of what they will face and are willing to face it because they are fighting for us! These Guys and Gals are my Heros!! They will be Victorious, because they have a Commander in Chief, and a loving family and nation that they know is depending on them, and they have the moral backbone and fortitude to not let us down!

If it does go Bad I'll know who to blame for the loss of my Heros, and it won't be Bush! He is trying to do the right thing. The infiltrated Demmocraps will be the culprets!
15 posted on 03/11/2003 7:32:41 AM PST by Hillarys nightmare
[ Post Reply | Private Reply | To 7 | View Replies]
To: kattracks; PhiKapMom; ALOHA RONNIE; RonDog; Grampa Dave
Al Gore and the Democratic Party, like the Western Europeans, fear global warming far more than they fear Saddam Hussein. George W. Bush and Dick Cheney fear Saddam far more than they fear carbon dioxide emissions.

THE LONE RANGER RETURNS TO DELIVER JUSTICE AND RID THE WORLD OF ISLAMOFACIST THUGS!

RERUNS WILL BE SEEN IN IRAN, SYRIA, AND NORTH KOREA IF THEIR DICTATORS ARE STILL IN POWER!

GW IS OUR LONE RANGER, AND WE APPLAUD HIS BRAVERY!

Meanwhile, somewhere in Havanna
...or Hollywood:

Only the ones that he believed could further his career. Here is a man who actually "sold" his vote on the first Gulf War to the party that would give him more face time on television. Link. Could anyone imagine Bush, Cheney, or Rumsfeld doing something like that?