The money has been paid secretly over the past 20 years, despite Mr Waldheim being linked to war crimes.

The former UN secretary general has been banned from setting foot on United States soil since 1987, when he was found to have "assisted or participated" in Nazi deportations and the executions of Jews and soldiers in the Balkans during World War II.

But now it has been revealed that the UN gives the 83-year-old ex-Wehrmacht intelligence officer an annual pension of $227,367 -- which he receives in Vienna and can expect to collect every year until he dies.

Mr Waldheim served two five-year terms as head of the UN from 1972 to 1982 -- and has been a UN pensioner ever since.

His time at the UN is now seen as a low point in the organisation's history.

In 1986, then US senator Daniel Moynihan introduced a non-binding rider to an anti-terrorism Bill that would have frozen Mr Waldheim's pension by withholding US contributions to it.

Although the measure was approved, no action was taken.

Sixteen years have passed, and the payments have never ceased.

Mr Waldheim's annual haul has shot up in the past 20 years, thanks to five budgetary resolutions passed in the General Assembly by acclamation.

The assembly voted Waldheim a series of pension-allowance raises even as evidence surfaced of his alleged role in the mass deportations of Greek and Yugoslav Jews to Nazi death camps, and in the execution of Allied prisoners in 1942-45.

Attempts to reach Mr Waldheim at his home in Vienna this week were unsuccessful.

Secretary General Kofi Annan, through spokesman Fred Eckhard declined to say whether he felt the pension was "wise or unwise, fair or unfair".

Because it is allocated as part of the UN budget by a ballot of the 190-member General As-sembly, Mr Eckhard said, "The question of whether the pension is appropriate or not is a question you'd have to put to 190 governments."

The UN payments will continue until Mr Waldheim's death, at which point his wife, if she survives him, will collect half his pension until her death.

9 posted on 10/20/2002 7:15:40 AM PDT by Mudboy Slim
[ Post Reply | Private Reply | To 2 | View Replies]
To: denydenydeny; Landru; Scholastic; sultan88; Alamo-Girl; backhoe; PhiKapMom; Twodees; M. Thatcher
"They don't want the other shoe of Waldheim's life to come out: That for the entirety of the time that he was UN General Secretary, he was controlled by someone--almost certainly the USSR--who was blackmailing him."

Somebody's got their thinking cap on this morning, don't they?! 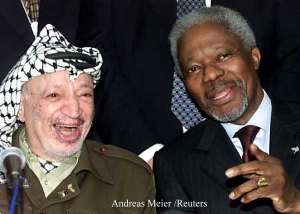 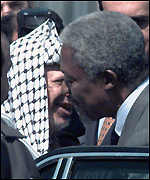 That aside, I'll ask rhetorically

"Which is a bigger, more bitter joke?
The un?
Or the nobel peace prize?"

14 posted on 10/20/2002 8:31:28 AM PDT by backhoe
[ Post Reply | Private Reply | To 10 | View Replies]
To: Eric in the Ozarks; Mudboy Slim
I am not a tinfoil hatter, and I've had my share of arguments with those I call "conspiracy nuts" (and I have been called a "coincidence nut.") But I remember the day that the Waldheim story broke on the front page of the New York Times in 1986. Facts, names, places, dates, photographs, all at once. Full documentation. With no prior warning.

Forty-year-old stories just do not break that suddenly and completely. It could only have been stuff that was in someone's file. There is no doubt in my mind about this. The full story has yet to be told.

The RATS Are In Disarray...Eradicate The Rodents !!

Death To all Tyrant's !!