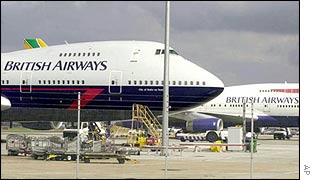 
Researchers at the world's largest aircraft maker, Boeing, are using the work of a controversial Russian scientist to try to create a device that will defy gravity.

The company is examining an experiment by Yevgeny Podkletnov, who claims to have developed a device which can shield objects from the Earth's pull.

Dr Podkletnov is viewed with suspicion by many conventional scientists. They have not been able to reproduce his results.

The project is being run by the top-secret Phantom Works in Seattle, the part of the company which handles Boeing's most sensitive programmes.

The head of the Phantom Works, George Muellner, told the security analysis journal Jane's Defence Weekly that the science appeared to be valid and plausible.

Dr Podkletnov claims to have countered the effects of gravity in an experiment at the Tampere University of Technology in Finland in 1992.

The scientist says he found that objects above a superconducting ceramic disc rotating over powerful electromagnets lost weight.

The reduction in gravity was small, about 2%, but the implications - for example, in terms of cutting the energy needed for a plane to fly - were immense.

Scientists who investigated Dr Podkletnov's work, however, said the experiment was fundamentally flawed and that negating gravity was impossible.

But documents obtained by Jane's Defence Weekly and seen by the BBC show that Boeing is taking Dr Podkletnov's research seriously.

The hypothesis is being tested in a programme codenamed Project Grasp.

Boeing is the latest in a series of high-profile institutions trying to replicate Dr Podkletnov's experiment.

The military wing of the UK hi-tech group BAE Systems is working on an anti-gravity programme, dubbed Project Greenglow.

The US space agency, Nasa, is also attempting to reproduce Dr Podkletnov's findings, but a preliminary report indicates the effect does not exist.

I didn't know Boeing was working on this. I've read about this before, and it is not a device that negates gravity. It is a device that sheilds gravity. We need a posting moratorium on this UK Tabloid garbage.

Today, NASA came out and dismissed the breathless sensational Brit tabloids accounts of the impending asteroid strike as "Rubbish". That is fairly unusual language for them.

Something has happened to the British Press. I know that in Bath, there is a lot of lead in the water, but was unaware the problem had reached London.

As soon as someone can explain what "Gravity" is, in the first place! I do not mean its actions, laws or symptoms, I mean the fundamental mechanism.

Till then these stories are pretty much "What you see is what you get".

There are only two redeeming features of these Brit Trash papers:

Remember all of those in our past who have said "That is impossible!" (The earth is flat, everything circles the earth, man can't fly... I could go on and on)

Here is another Physics brainteaser.