The ruling class still believes in a consensus that doesn’t exist. Their legitimacy is vanishing

The Democratic party and the chattering classes are playing a dangerous game with impeachment.

The only outcome possible is to confirm for Democrats and Republicans alike the idea that 2020 is a regime-change moment, for reasons that go far beyond Trump.

With Trump, everything is different. The 2016 election was a referendum on the regime itself. Trump resurrected the populist attacks on the country’s political and economic establishment that Buchanan and Perot had battle-tested in the 1990s.

TOPICS: Editorial; Government; News/Current Events; Politics/Elections
KEYWORDS: impeachment; kag; maga; trump; trumpukraine; ukraine Navigation: use the links below to view more comments.
first previous 1-20, 21-40, 41-60, 61-80, 81-98 next last
To: chrisser
I took typing in high school as an elective in 1969 or so. It was all girls in the class as they were saying to us, a secretary's job requires typing skills. The boys were not encouraged to take typing, they would be CEO's and hire girls to type for them!

My husband, same age, same high school, never took typing and suffered for it when computers came around. He is a self taught C programmer and hunt and pecked the keyboard writing computer code, it was rough. I think he has his own system now, but not the one I learned. I can probably still type 90 to 100 words a minute.

They did encourage girls to take woodshop and I took them up on it, first girl in wood shop in my school in 1970.

I’m 68, and the typewriters we had for class were all manual machines.

43 posted on 10/02/2019 7:06:07 AM PDT by ought-six (Multiculturalism is national suicide, and political correctness is the cyanide capsule.)
[ Post Reply | Private Reply | To 37 | View Replies]
To: pburgh01
Dems really believe the country is ready with plurality support

The irony is deep here. First of all, the dems - like all proglib movements around the globe, past and present - know they don't have a plurality, nor anywhere near levels of popular support.

Now, for the punch line. The author states that 40% is far in excess of most revolutionary change. Well, guess what? That's exactly what the progs are shooting for. No, not the patriots' 40%, but their own meager 15-20%.

That's what the coup is all about - to achieve via fait accompli, aided & abetted by the largest, most pervasive gas lighting propaganda effort in modern history, a general consensus that Trump must be deposed, and all good citizens should follow.

I realize the general consensus is that this is an insightful article, but I think a significant contingent on the right has understood these dynamics for a long, long time. Our collective destiny is linked with the next proactive moves Trump takes. The cards were dealt long ago, now we're just waiting for the game to get underway.

It does put one in mind of the final days of East Germany.

My vote for Trump in 2016 was basically a last-gasp throwaway. American politics, which had given us a wide range of leaders over the years, had dumped the absolute dregs on us. It was getting difficult to even recognize which one was the “lesser of evils” guy. If the hildebeast prevailed the nation I revered would be no more.

Trump has exceeded every expectation and I can’t wait to pull the lever for him again. He isn’t a politician and doesn’t pretend to be. He is a statesman who is righting the ship of state.

The problem with analogies is that they are almost always force-fit and thus inapt. I don’t think Trump harbors any illusions as to his status quo or his mission. Whether putative king or usurper to the throne, he is the consummate outsider rejecting the long established (dis)order. Should he miss the mark it won’t be for lack of trying. And I’ve never seen anyone continue to gain ground with as many dragging at him.

“A Republic, if you can keep it”

There are around FORTY sitting Democrat House representatives who voted all Nays during Rapin Bill Clinton's impeachment in 1998.

There are about seven sitting Democrat senators who voted all Nays when they were congressscum back in 1998.

Of course, mum's the word in the Democrat Media about all this. 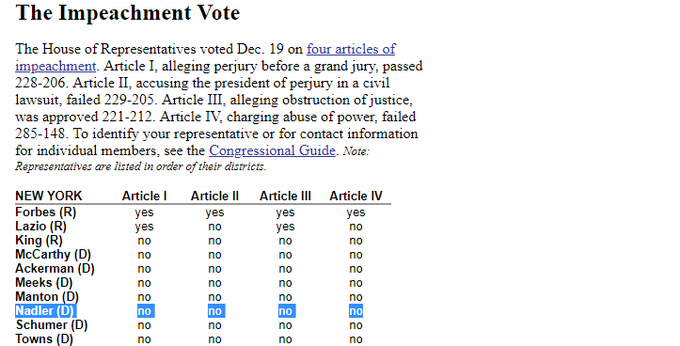 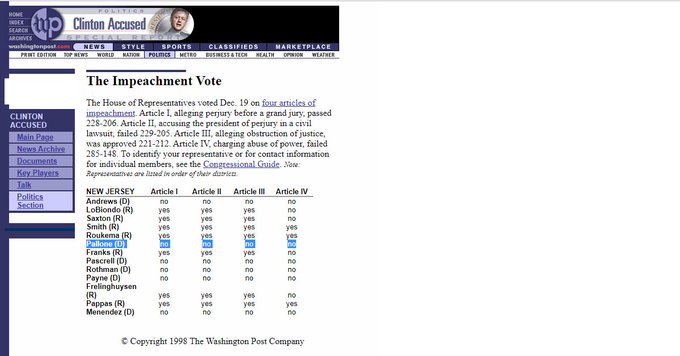 I took typing in high school because that’s where all the girls were! ;’}

“40 percent is anti-regime — revolutions are made with less.” I remember reading somewhere that only about 3 percent of the population actually took up arms and fought against the British, yet we still won the Revolution. 3 percent today would be what? Almost a million people? Big number if they are serious.

it has no chance of acquitting him in a way that will strengthen faith in the country's institutions.

The DEMs are going to impeach Trump. That die was cast when the DEMs took the House. Facts and “rule of law” have nothing to do with it. This will be a show “indictment” with a complicit press. The DEMs are very experienced at throwing false accusations. Much of the time, they make them stick. The CIA is experienced at regime chage. Our government is in open revolution against the people.

As it became clear that the Russia thing was baseless, Trump’s polling numbers went up.

As it becomes clear that the Ukraine thing is baseless, his polling numbers will go up again.

My only “dream” would be that the Ukraine thing is baseless.

I also dream that Biden will drop out. That can’t hurt Trump’s standing.

I also dream that corruption by the deep state guys will become more clear.

Whatever "official" means. She/;s in charge, and half a dozen House committees are investigating with an eye on drafing articles of impeachment. The process is designed to be parisan by freezing out the GOP. All political calculus. If a majority of the House votes to send articles of impeachment to the Senate, then that's what will happen.

Let me ask this. Was the SC Mueller "official?" Yes, it was. Was it unbiased? Do the people trust the outcome? Rehtorical question - the report was by a clearly anti-defendant team. It is not an unbiased report. It does not deserve to be credited as "fair." It is part of an out-of-control government body.

Same with the House. It is IMPOSSIBLE to make the House act "fair." It is a fire, it is a powerful, dangerous instrument. it will do what it wants, and there is nothing you can do about it, other than vote for 1 rep and 2 senators. And they don't care about your vote.

Thumbs up on your post as it comes close to the reason I was so relieved when he finally, for real, declared that he was a candidate for the presidential election. His exposure of the Deep State and the tentacles it has throughout our US government, as well as foreign governments, has been just in time to possibly save this Republic from a globalist, one world govt. God bless Pres Trump and all of those loyal, patriotic Americans who are working to help him accomplish what he does for American independence and this Republic.

Trump & GOP will go well over $2,000,000,000.00 (Two Billion, PLUS Dollars) in collected campaign contributions from small donors. Meanwhile all Democrats will sink deeply into the “Forever Obscurity Swamp”!!!

And they don’t care about your vote.
That’s Obvious..

I think I see Helen Thomas in the front row!!

I am not certain the House will move to formal impeachment. There will be endless hearings and daily breathless “bombshells” reported by the lying media just like they did during the Muller investigation. However, voting articles of impeachment along party lines followed by a quick end in the Senate right before the elections would be folly. The American people are growing tired of the hate Trump circus and given the likely choice of Trump versus the likes of Elizabeth Warren in the election, impeachment neither removes Trump from office nor helps the Democratic candidates in the 2020 election. The adults in the Democratic Party have lost control to the crazies. Pelosi had to give some kind of impeachment to placate the crazies though I believe she is smart enough to know it will not help the party win either the White House nor Congress. I look for endless hearings right up to the election, but no impeachment vote. The rally cry for the Democrats in the election will be give us the Senate so we can finish impeaching Trump. That isn’t going to play well with the voters especially if Trump is reelected. Imagine..vote for us so we can get rid of the man you just elected president.