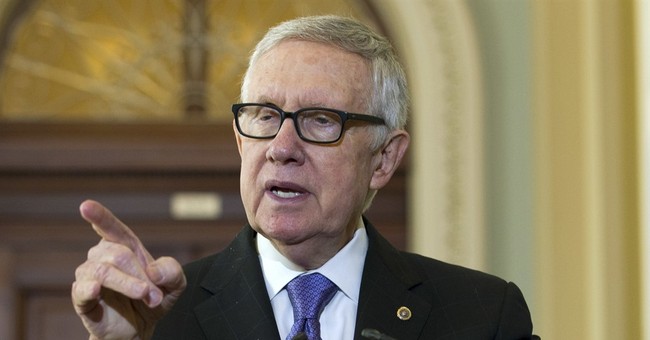 The always classy Harry Reid took to the Senate floor on Thursday to demand Trump take action against a reported spike in hate crimes after the 2016 election.

"Two days ago I came here and called upon our president-elect to rise to the dignity of his office. I called upon Mr. Trump to take responsibility for his rhetoric and his actions to work to heal the wounds that he created," the outgoing Minority Leader said. "Our president-elect has chosen to do none of the things to this point… There's only one person who can bring a stop to that quickly, and that's the president-elect. Our nation is looking at Donald Trump."

Senator Harry Reid apparently paid no attention to Trump’s highly publicized interview on 60 Minutes, the first public interview since his victory win. Trump vehemently opposed any hate crimes and repeatedly called on actors of such crime to “stop it.”

Trump’s victory speech on election night was given rave reviews by pundits from both sides of the political spectrum. Trump reached out to all Americans when his victory was apparent. Also, Trump’s visit to the White House with President Obama earned strong marks from viewers as a sign of good faith from both men.

On the other hand, Reid’s language post-election has been nowhere near the stratosphere of “healing.” On the Friday following Election Day, Reid called Trump a “sexual predator” who fueled his campaign with “hate” and “bigotry.” Reid even questioned the legitimacy of Trump’s victory, citing his loss of the popular vote.

How on Earth is this meant to unify a nation after a long fought election battle? Now Reid is calling on Trump to heal wounds after he’s been stoking the flames with gasoline? Perhaps Harry Reid should call out the mass protests across the nation over a democratically elected president-to-be. Numerous reports of Trump supporters being beaten up, even having a car stolen, has made waves across the news.

Should we expect a man who openly lied about the past Republican presidential nominee to take the high road? For those who may have forgotten, Reid claimed during the 2012 election that a source told him that Mitt Romney had not paid taxes in years. After the allegation was revealed to be bogus, Reid laughed it off.

I lied about you.

I called you a racist, and inferred it many times.

I trashed you for daring to propose to enforce the laws of our nation.

I called you a danger to our nation.

I suggested you should never be allowed to control the nation’s military or nuclear weapons.

I suggested you would offend all other world leaders.

I suggested you would destroy our current positive trade relations.

I suggested your tariff ideas were idiotic, although our Founding Fathers designed our government to be paid for by tariffs.

I accused your people of being violent.

I accused you of encouraging it.

I know this was never born out, but that didn’t stop me from charging you and them with these things.

My side beat up your supporters at rally after rally.

My side actually blocked streets to prevent folks from attending your rallies.

We paid them to do these things.

We bused them in to do these things.

We coordinated the media to destroy you.

The media went all in with us to lie about you.

The media produced and released polls that were fraudulent to beat down support for you.

The media cut clips of your speeches to report things out of context to destroy you.

The media misrepresented you in many ways.

The media went so far to hand the questions going to be asked in the debates to your opponent Hillary Clinton to her in advance.

The media refused to address Clinton’s illness, it so hated you.

The media refused to address Clinton’s massive list of crimes, it so hated you.

The media refused to remind folks of Hillary getting fired off the staff of the House Nixon impeachment proceedings, because it so hated you.

The media refused to remind folks that Clinton hired a woman and private investigators to threaten and intimidate victims of Bill Clinton’s rapes and assaults.

Despite all this, the media played it up that Hillary Clinton was the best fit to represent women, because it so hated you.

The media refused to ever chastise her for lying about the events relating to Benghazi, because it so hated you.

The media refused to tell the public she was lying about the cause for the Benghazi attack, because it so hated you.

The media refused to tell the public that Ambassador Stevens had requested better security over 600 times, because it so hated you.

The media refused to tell the public that Hillary Clinton approved hiring terrorists to be the security at the Benghazi compound, because it so hated you.

The media refused to tell the public about Soros, Clinton, McCain, Graham, and Obama all working to replace governments that were friendly to the United States, because it so hated you.

The media failed to tell the public that Russia and the United States came close to a nuclear war due to Obama, Clinton, McCain, and Graham’s advocacy.

In recent days we have continued to trash you for your racism.

We have trashed your supporters for being racists.

We trashed them for backing you.

We said they had to be evil to do this.

Meanwhile we bused in people around the nation to “protest”. Well, that’s what we called it.

These people were in actuality rioting.

These people were beating and kicking people when they were down, sending them to the hospital

They attacked children, pregnant women, and others.

After all this, there is one glaring thing that needs to be said, and you know what it is.

Now when are you finally going to apologize so wounds can heal?

Blacken his other eye. Heal the wounds? F@ck him. Let him lay there and bleed.

I think Trump is more into wounding heels like Harry.

Obama NEVER healed my wounds from 2008!!! He allowed them to fester and turn to gangrene!! He spent eight years making them worse!

Healing wounds inflicted upon American citizens by Obama and his regime is exactly what Trump is doing.

And they believe among other idiotic beliefs that the natives in America were ancient Hebrews.

LIARS!!!! Just like the Japs before Pearl Harbor... Democrats are looking to attack viciously in a position of power

What is Weed talking about? Trump was elected to inflict many more wounds.

Yep - this is what every lib on my Facebook wall is saying.

Right before they go into another rant about how they hate Trump and his supporters.

I don’t think that all Mormons act like this.

Steponallofus really is a tool

In other words, if he helps anyone “heal their wounds,” it’ll be an admission that he caused them. What “wounds” is he purported to have caused? Here’s an example: