This is only the beginning.

Decided by whom? Did Georgia have a say so in this?

God help us and the former Soviet states now that the Pansy in Chief is in charge of the greatest military in the world.

Georgia better make sure every citizen has an automatic weapon so their can’t be pacified because Obama is going to suck on his thumb why Georgia and Columbia go down in flames.

Give every able bodied person over the age of 16 weapons training, and a fully automatic weapon, a pistol, and a few thousand rounds. Teach them gorilla tactics, and bleed the Russians when they come calling.

Wait - wait - I just read that Zero had gotten Russia to make all these concessions.....by his super smart removal of the missile defenses which were promised to Czech Republic and Poland....

How can this now be?? /sarc

7 posted on 11/17/2009 8:12:06 PM PST by Freedom'sWorthIt (Obama's Deathcare ---- many will suffer and/or die unnecessarily.)
[ Post Reply | Private Reply | To 1 | View Replies]
To: autumnraine
Don't expect Obama to do anything if Putin decides to annex the remainder of Georgia. If he had been President of the US in 1990, Kuwait would still be a part of Iraq (which would still be under Saddam Hussein).

As of the end of WWII, Stalin had regained all the land Russia lost at the end of WWI, except for Finland and a small area at the eastern end of the Black Sea, just south of Georgia, which Turkey acquired.

Possibly their NATO membership will protect the Baltic countries from re-annexation, and maybe Putin will let go some of the mostly-Muslim republics of central Asia, but he may figure Belarus, Ukraine, Moldova, Georgia, maybe Armenia and Azerbaijan, and perhaps portions of Kazakhstan are fair game for reinclusion in his empire.

The Baltics are caving from within.

Latvia is the start with the Russian population that is pro-Kremlin getting voted in positions of power. It took a while before they could get their Latvian citizenship to vote, but they are now voting.

Lithuania may be the saving grace. But like the E.U., they do need Russia’s natural gas as does Poland...

NATO will watch as Gazprom continues to remind Europe who supplies a large portion of their natural gas..

When you have Turkey playing with Russia on exercises, you have to ask, how strong is NATO.

Times have changed with China, Iran and Russia...

Everyone should study the attitudes of Reagan and Obama, and take note of what each achieved or are achieving with theirs.

Look how many millions Reagan brought into the light because of his soundness.

How many millions will sink into darkness because of Obama’s naivete?

10 posted on 11/17/2009 9:21:45 PM PST by DoughtyOne (A MELTING POT not a potters wheel. Join us. Don't try to turn this nation into the one you fled.)
[ Post Reply | Private Reply | To 1 | View Replies]
To: theanchoragedailyruse; Verginius Rufus
Last May I posted the following reply which I think has been borne out by events. Since then we have the spectacle of Obama caving in utterly to Russia. We have him pulling the missiles from Poland and the Czech Republic signaling to the Baltics and indeed to the rest of Eastern Europe that America is no longer there for them. Domestically, Obama has throttled all domestic carbon-based nuclear sources of energy leaving us even more vulnerable to the Russia-Venezuela axis. I believe that in addition to caving to Vladimir Putin on the issue of missiles, Obama gave him a green light in Georgia.

Things are clearly moving to a head. The Russians are threatening an invasion of the rump of Georgia and there is no reason to believe that Obama has the slightest intention of doing anything about it after the event or to take any steps to prevent the event.

We must see these growing threats as connected. A look at the map of Georgia shows that Russia is moving geographically as well as philosophically toward a connection with Iran. If Russia takes Georgia it will be in possession of virtually all the pipelines running to Europe which supply my neighbors here with gas and Europe with oil and gas. If Iran gets the bomb, the whole of the Middle East will become a nuclear nightmare and a strike somewhere by some crazed country such as Iran or some crazed terrorist group which acquires the bomb, is almost inevitable. One of the victims of this madness will undoubtedly be Israel.

Even if there is no war the entire balance of power in the Persian Gulf will have shifted away from America toward Iran which will have the same effect on the Gulf states as it has on our NATO allies, they will move away from America toward Iran to appease away the immediate threat. The price of oil around the world will Spike and Russia and Venezuela and Muslim states who fund terrorists will be empowered to do mischief everywhere.

It is self evidently in Israel's national interest to strike against Iran and prevent or at least delay them getting the bomb while Iran is under the control of these mad Islamicists. But there is every reason to believe that Obama will not facilitate the strike, rather, he will affirmatively move to stop Israel doing it.

So elections have consequences. We have a Manchurian Marxist in the White House who is going to countenance the separation of Europe from energy sources and the inevitable blackmail of Europe by Russia which will follow. He will countenance the likely breakup of NATO which will be the price to appease Russia and secure energy for Europe. He will passively watch an alliance between Russia and Iran which might well grow to include an alliance with Venezuela and Cuba, all of whom having access to the bomb. His policies will make war in the Middle East almost inevitable. They threaten the very existence of Israel.

The consequences of this election might be very terrible indeed. 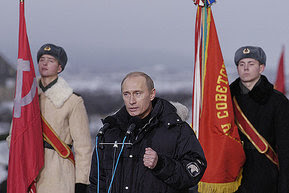 To be added to or removed from this list, please FReepmail me...

So I guess that the Soviet Politboro was meeting again... I wonder if the leaders of Belarus and Kazakhstan had a live feed.

Ukraine will fall back into the Russian orbit next year. Kazakhstan and other ‘stans, with Belarus, have started talks towards a reunification with Russia to form a “Soverign Union” and eventually a total Pan-Russian union. This union will probably have Marxist-Leninist elements with some capitalism (like China). Welcome back, USSR.

14 posted on 11/17/2009 9:33:07 PM PST by Thunder90 (Fighting for truth and the American way... http://citizensfortruthandtheamericanway.blogspot.com/)
[ Post Reply | Private Reply | To 9 | View Replies]
To: DoughtyOne
Everyone should study the attitudes of Reagan and Obama, and take note of what each achieved or are achieving with theirs. Look how many millions Reagan brought into the light because of his soundness. How many millions will sink into darkness because of Obama’s naivete?

President Reagan lived long enough to observed the destructive nature of rule by force, even down to how unions operate. I think it is not Bama's naivete at work but him taking advantage of the by design indoctrinated American naivete. I think BamaKennedy knows exactly what he is doing. Government is basically the 'union' shop and they intend on having their way.

I’m not sure we’re disagreeing here.

I agree he’s doing this on purpose, but I still think he is incapable of comprehending the death and mayhem he’s ushering in.

You may think be doesn’t care, in the interest of attaining his goals, and that may be true.

17 posted on 11/17/2009 9:50:13 PM PST by DoughtyOne (A MELTING POT not a potters wheel. Join us. Don't try to turn this nation into the one you fled.)
[ Post Reply | Private Reply | To 15 | View Replies]
To: Tailgunner Joe
Prime Minister Vladimir Putin, who has often described the collapse of the Soviet Union as “the greatest tragedy” of the 20th century,...

Yeah Vlad, the breakup of the U.S.S.R. ranks right up there. No wonder you and your ilk couldn't hold that s--t hole together you inconsiderate prick.

18 posted on 11/17/2009 9:59:37 PM PST by DoughtyOne (A MELTING POT not a potters wheel. Join us. Don't try to turn this nation into the one you fled.)
[ Post Reply | Private Reply | To 1 | View Replies]
To: DoughtyOne
I’m not sure we’re disagreeing here. I agree he’s doing this on purpose, but I still think he is incapable of comprehending the death and mayhem he’s ushering in. You may think be doesn’t care, in the interest of attaining his goals, and that may be true.

When he speaks of his own mind and mouth he presents a cold calculating person. The 'middle' class represents the uncontrolled numbers because they are the majority of Americans. For him to say publicly that he intends to require 'pills instead of procedures' for old American grandmas tells what his heart is made of.

I cannot 'judge' him, because he may well be reenacting Pharaoh, and it is written that his heart was hardened. And Bama is clearly about the imposition of bondage.

I wouldn’t argue with that at all. Communism or any of the others isms this guy dabbles in, result in oppression. I do find it easy to judge this guy though, right or wrong.