Military retaliation from Baghdad was the main administration concern following Saturday's strike on Iraq. Yet U.S. officials should start thinking seriously about the question of retaliation through terror. It is quite possible, for example, that there was a connection between Saddam and recent attempts to blow up Manhattan. It is quite possible that New York's terror is Saddam's revenge.

Speculation about the responsibility for last week's bombing plot and the earlier World Trade Center bombing has focused on Iran, Sudan, and the fundamentalist Sheik Omar Abdel-Rahman. Much energy has been spent linking the terror to Islamic fundamentalism. Yet Saddam, a secular tyrant, is also suspect.

Information already in the public domain allows us to make this case. Start with the fact that the most important person in the Trade Center bombing is an Iraqi, Ramzi Ahmad Yusuf. Known in New York as Rashid, Mr. Yusuf has 11 aliases. The U.S. press has reported that he left Iraq in early 1992, transiting Jordan to Pakistan. He entered New York in early September on Pakistan Airways. Mr. Yusuf, traveling on his Iraqi passport, passed through immigration by requesting asylum. The FBI claims the plot began in August, while Mr. Yusuf was abroad.

Mr. Yusuf soon became the roomate of Mohammed Salameh, the naive Palestinian who repeatedly returned to the van rental agency for his deposit. Passionate, but not bright, Mr. Salameh would appear a ready dupe to an intelligence operative. In trial documents, an Iraqi-American, Musaab Yassin, has stated that he had known Mr. Salameh two years. Mr. Yassin moved into Mr. Salameh's apartment in September 1992, and Mr. Salameh moved out. Mr. Yassin's younger brother, Abboud, lived with him. An Arab who knows Musaab Yassin, like Mr. Yusuf, came to the U.S. in the fall of 1992, seeking medical treatment.

In late November, Mr. Yusuf allegedly ordered chemicals for the bomb and Mr. Salameh rented a locker to store them. The plot was underway. In early February, Mr. Salameh notified his landlord that he and Mr. Yusuf would leave at month's end. On Feb. 26 the World Trade Center was bombed. Messrs. Salameh and Yusuf vacated their apartment two days later.

Mr. Salameh was arrested March 4. Musaab Yassin returned home that day to find the FBI searching his apartment, while Abboud had been taken for questioning. Abboud Yassin told the FBI that he taught Mr. Salameh to drive the van that carried the bomb, that he accompanied Mr. Salameh to an apartment later identified as the bomb's testing ground; and Abboud Yassin's information helped lead the FBI to the locker where the chemicals had been stored. The U.S. press reports that Abboud Yassin then returned to Iraq, as did Mr. Yusuf. The New York Times reported that Arabs who knew Mr. Salameh and the second Palestinian arrested, Nidal Ayyad, said that the two had "close ties with two Iraqis, one of whom they say was named Rashid, but both of whom have since disappeared."

This information, although sketchy, indicates Iraqi activity. If Mr. Yusuf, the key figure, had worked for Iran, Tehran would not have let him return to Iraq. Given the totalitarian nature of the Iraqi regime, even Abboud Yassin's return to Iraq is significant. An innocent man would, arguably, have chosen to stay in the U.S.- he would have a better chance of a fair hearing in a U.S. court than before an Iraqi intelligence officer. If Abboud Yassin was involved in the bombing- but was not acting under Baghdad's instruction- then it was even more imprudent for him to return to Iraq. Mr. Yusuf and Abboud Yassin could have gone to Afghanistan, where they would not have exposed themselves to the potentially fatal suspicions of Baghdad's intelligence agencies.

That two men involved came from Iraq and returned there is reason enough to consider an Iraqi role in the World Trade Center bombing. What other possible evidence is there? It has been reported that the bombing suspects received money from abroad: up to $100,000 from Germany, Iran, and "another Middle Eastern Country." That country is probably Jordan, shielded by U.S. authorities who continue protecting Amman for the sake of the "peace process." Without knowing how much money came from each country, though, it is hard to exclude Iraq. Last but not least, it is worth noting that the February bombing occurred on the second anniversary of Kuwait's liberation.

What about last week's arrests? The FBI arrested five Sudanese and three others as it broke up a second bombing plot. The conspirators' first target was the United Nations' headquarters. Other targets were added, including FBI headquarters in New York. Additionally, four assassinations were planned, including that of Egyptian President Hosni Mubarak and U.N. secretary general Boutros Boutros-Ghali.

Like the Trade Center bombing, much of this operation was amateurish. The conspiracy instigator, Siddiq Ibrahim Ali, had a plan to get a car into the FBI building, but it was amateurish (he proposed shooting the guards). Professional terrorists divide their organizations into small cells, each devoted to specific tasks. These planners used a large group in which every participant was known to the others, so that the entire plot could quickly unravel once one member was caught. Yet, like the World Trade Center bombing, this was audacious. Had it suceeded, thousands could have died.

It's important to note that both the Trade Center bombing and the later plot represent something new- at least in the West. Saddam however commits that kind of carnage on a daily basis.

Two of the nations thought to be behind the second plot are not ideal suspects. Khartoum is suspected, because Sudanese played a big role in the plot. With Iran, Sudanese has been involved in a violent campaign to overthrow secular governments in North Africa, including Mr. Boutros-Ghali's own government in Cairo. But Khartoum has not sponsored terrorism against U.S. targets. That it should suddenly support potentially the most devastating anti-American attack ever makes little sense. A separate question though is whether Sudanese diplomats could be bought. This is possible, since Khartoum is broke, and months behind in paying its diplomats.

Iranian sponsorship of the plot is also unlikely. Iran has no big quarrel with the U.N.- it benefits from the U.N.'s disarmament of Iraq. The U.N. is not the obvious target for Muslim extremists. Their quarrel is with the U.S. They could have easily chosen an American target. Explaining why fundamentalists would bomb the U.N. is possible, but the explanation is strained- that they see the U.N. as a U.S. surrogate; that their violence is caused by anger at many issues involving the U.N., including Bosnia, Somalia and the Palestinians. The Trade Center suspects issued a set of demands that the U.S. stop aiding Israel and stop interfering in the internal affairs of Middle Eastern countries.

Saddam by contrast has every reason to attack the U.N. Saddam also hates Egypt's Mubarak and wants him dead, no less than he wanted George Bush dead. Baghdad Radio threatened Mr. Bush personally during the Gulf War and Mubarak as well, "Does he (Mubarak) think that the crime he committed against the people of Iraq will go unpunished?...Prepare yourself for it and shiver at the thought."

Attention has focused on the Iranian-Sudanese relationship. But Baghdad could as easily recruit Sudanese as Tehran.

For Saddam, Iraqi sponsorship would be vengeance with a twist. Baghdad wants Washington to blame Iran for the terror striking America's shores. If it doesn't and fundamentalists are caught, that too is fine, because it promotes a hysteria about Islamic fundamentalism and Iran which, Saddam calculates, would eventually benefit Iraq. If Saddam is behind the attacks, more will surely follow.

The focus of the New York investigations should shift to the question of state sponsorship. If considerable evidence points to Saddam, then President Clinton must fulfill his Saturday pledge: "We will combat terrorism. We will deter aggression. We will protect our people."
[End of Transcript]

NOTE: The FBI and the Mad Bombers

TRADING WITH THE ENEMY

WHAT DO YOU KNOW ABOUT CHINA REALLY?

U.S. stock indexes may plunge as much as 10 percent when trading opens Monday

Korean Air 747 - Jumbo jet blown out of sky? - Details of crash in England kept secret from public
"Intelligence sources confirmed to WorldNetDaily that a terrorist bomb is the most likely cause of the crash, and Osama bin Laden's forces are the key suspects"

The Prince of Wales has dined at a Saudi Arabian banquet attended by the brother of the world's most wanted terrorist.

Bakar Bin Laden is the younger brother of Osama Bin Laden, head of an Islamic extremist group blamed for devastating attacks against the United States.

But there is no suggestion that Bakar Bin Laden has been in any way involved in any of his brother's activities.

Charles, on a three-day visit to the kingdom, was a guest of honour at a lavish ceremonial banquet held on Friday night at the Al-Faisaliah Centre in the capital Riyadh.

He sat alongside the host, Crown Prince Abdullah bin Abdul Aziz, the deputy ruler of Saudi Arabia, which Charles is visiting to open an exhibition of his paintings.

Several tables away was Bakar Bin Laden, who owns a construction empire in Saudi Arabia and is a prominent businessman.

The US accuses Osama Bin Laden of ordering the bombing of its embassies in Tanzania and Kenya in August 1998 - attacks which killed 224 people.

Charles had previously been introduced to Bakar Bin Laden, when the exhibition of his paintings first opened in London in June last year. A source who was at the event, in Whitehall, said: "Prince Charles and Prince Khalid were standing there greeting guests when Bin Laden's turn came.

"Prince Khalid said to him: 'This is Mr Bin Laden' and Charles's eyebrows shot up. He said: 'Not THE Bin Laden?'

"Prince Khalid said, 'No, no it is his brother', and Prince Charles turned to him and shook his hand.

"Then in a bit of mischief, Prince Charles asked Bin Laden: 'What is your brother up to these days?'

"I have no idea what his answer was," the source said. 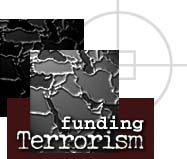