Saint Teresa's Life - In Her Own Words

Thanks for your hard work, LIB. I always appreciate it. 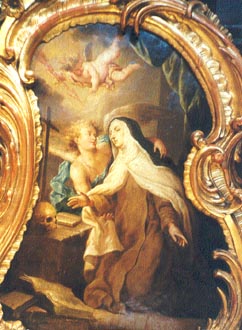 Teresa lived in an age of exploration as well as political, social and religious upheaval. It was the 16th

century, a time of turmoil and reform. Her life began with the culmination of the Protestant Reformation, and ended shortly after the Council of Trent.
The gift of God to Teresa in and through which she became holy and left her mark on the Church and the world is threefold: She was a woman; she was a contemplative; she was an active reformer.
As a woman, Teresa stood on her own two feet, even in the man's world of her time. She was "her own woman," entering the Carmelites despite strong opposition from her father. She is a person wrapped not so much in silence as in mystery. Beautiful, talented, outgoing, adaptable, affectionate, courageous, enthusiastic, she was totally human. Like Jesus, she was a mystery of paradoxes: wise, yet practical; intelligent, yet much in tune with her experience; a mystic, yet an energetic reformer. A holy woman, a womanly woman.
Teresa was a woman "for God," a woman of prayer, discipline and compassion. Her heart belonged to God. Her own conversion was no overnight affair; it was an arduous lifelong struggle, involving ongoing purification and suffering. She was misunderstood, misjudged, opposed in her efforts at reform. Yet she struggled on, courageous and faithful; she struggled with her own mediocrity, her illness, her opposition. And in the midst of all this she clung to God in life and in prayer. Her writings on prayer and contemplation are drawn from her experience: powerful, practical and graceful. A woman of prayer; a woman for God.
Teresa was a woman "for others." Though a contemplative, she spent much of her time and energy seeking to reform herself and the Carmelites, to lead them back to the full observance of the primitive Rule. She founded over a half-dozen new monasteries. She traveled, wrote, fought—always to renew, to reform. In her self, in her prayer, in her life, in her efforts to reform, in all the people she touched, she was a woman for others, a woman who inspired and gave life.
In 1970 the Church gave her the title she had long held in the popular mind: Doctor of the Church. She and St. Catherine of Siena were the first women so honored.


Teresa knew well the continued presence and value of suffering (physical illness, opposition to reform, difficulties in prayer), but she grew to be able to embrace suffering, even desire it: "Lord, either to suffer or to die." Toward the end of her life she exclaimed: "Oh, my Lord! How true it is that whoever works for you is paid in troubles! And what a precious price to those who love you if we understand its value."


One of the most charismatic of the Church's counter-reformation saints, Teresa Sanchez Cepeda Davila y Ahumada was born the daughter of a saintly and literate father, Don Alonso, and a pious mother. At fifteen, after her mother's death and the marriage of her oldest sister, Teresa was sent to be educated with Augustinian nuns, but after an illness she returned to live with her father and other relatives. An uncle acquainted her with the Letters of Saint Jerome, which led her to pursue religious life. At the age of 20 Teresa joined the Carmelite Convent of the Incarnation at Avila.

During the sixteenth century the early austerity and religious enthusiasm that had characterized religious orders when they were founded, had been lost, and "worldliness" of all kinds, and even moral corruption was widespread. (The Protestant Reformation began in 1519 in Germany, at first as a reaction to the pervasive corruption and lack of governance by Church authorities.)

Teresa's convent at Avila was no exception. Although she had been devout at first, she lost this fervor and embraced the lax life of her convent. After the death of her father, and several serious illnesses, however, she was led to reform herself through intense prayer, and began to have religious experiences which she, and the priests she consulted, thought were delusions.

Two Jesuit confessors, however, believed Teresa's experiences were genuine graces, and advised her to lay a firm spiritual foundation through private prayer and the profound practice of virtue. During this time, she had even more intense and extraordinary experiences of "heavenly communications" -- including "mystical marriage", or the "espousal" of her soul to the person of Christ -- and even bodily manifestations of her spiritual elevation.

Her confessors ordered her to write her experiences of the spiritual necessity for prayer, the practice of contemplative prayer, and its fruits. She wrote the Way of Perfection and Foundations for her nuns, and The Interior Castle, as a guide for all. It was principally for these writings that she was declared a Doctor of the Church four centuries later. Her writings are intensely personal spiritual autobiographies, based on her own experiences and insights, and are remarkably clearly written. They remain spiritual classics -- along with Saint Augustine's Confessions.

Inspired by a niece, who was also a Carmelite at Avila, she decided to undertake the establishment of a reformed convent that would be restored to the austerity and devotion of earlier times. This effort met strong opposition from several quarters. In 1562, Teresa received approval for a new foundation, the Discalced Carmelite Nuns of the Primitive Rule of Saint Joseph, at Avila, which she began with with her niece and three other nuns. Several years later, while she was establishing a new convent in Toledo, she met John Yepes (later John of the Cross), and soon after made new foundations for men that were eventually placed under his care. Difficulties and opposition to the newly established reformed Discalced Carmelite foundations persisted. ("Discalced", literally "shoeless", refers to the austerity of the new foundations. The nuns and friars wore sandals instead of shoes).

Finally, in 1580, the separation of the Discalced Carmelites from the other Carmelites was recognized by the Holy See -- when Teresa was sixty-five years old, and in poor health. Teresa made seventeen foundations of the Discalced Carmelites, her last at Burgos in July, 1582. Instead of returning to Avila from Burgos, she set out for Alba de Tormes. It was a difficult trip and she was ill. Three days after reaching Alba, she died -- on October 4, 1582, and was buried there. The next day the Gregorian reform of the calendar was effected, which resulted in dropping ten days. Thus her feast is fixed on October 15.

St. Theresa’s most popularly known writing is a brief poem is known as her “Bookmark”, because it was found in her prayer book after her death in 1582. It has been variously translated into English, and has been very widely circulated.


Let nothing disturb you,
Let nothing frighten you,
All things are passing away:
God never changes.
Patience obtains all things.
Whoever has God lacks nothing;
God alone suffices.

Collect:
Lord, by your Spirit you raised up Saint Teresa of Jesus to show your Church the way to perfection. May her inspired teaching awaken in us a longing for true holiness.
Grant this through our Lord Jesus Christ, your Son, who lives and reigns with you and the Holy Spirit, one God, for ever and ever. Amen.

First Reading: Romans 8:22-27
We know that the whole creation has been groaning in travail together until now; and not only the creation, but we ourselves, who have the first fruits of the Spirit, groan inwardly as we wait for adoption as sons, the redemption of our bodies. For in this hope we were saved. Now hope that is seen is not hope. For who hopes for what he sees? But if we hope for what we do not see, we wait for it with patience.

Gospel Reading: John 15:1-8
"I am the true vine, and my Father is the vinedresser. Every branch of mine that bears no fruit, he takes away, and every branch that does bear fruit he prunes, that it may bear more fruit. You are already made clean by the word which I have spoken to you. Abide in me, and I in you. As the branch cannot bear fruit by itself, unless it abides in the vine, neither can you, unless you abide in me. I am the vine, you are the branches. He who abides in me, and I in him, he it is that bears much fruit, for apart from me you can do nothing. If a man does not abide in me, he is cast forth as a branch and withers; and the branches are gathered, thrown into the fire and burned. If you abide in me, and my words abide in you, ask whatever you will, and it shall be done for you. By this my Father is glorified, that you bear much fruit, and so prove to be my disciples.

This dish, which makes a tasty breakfast or branch, is a first cousin to French toast, but with a flavor and texture all its own.

Combine the milk with the sugar, cinnamon, and lemon peel. Simmer gently for 5 to 10 minutes, until the milk has become well flavored. Place the bread in a large flat dish or pan, and strain the milk over it.

Beat the eggs in a shallow bowl with a pinch of salt. With a spatula, lay the slices of bread in the egg, turning them to coat both sides. Beat additional eggs and salt together if necessary to finish coating bread slices. Fry the bread in the olive oil until it is browned and crusty on both sides.

from A Continual Feast by Evelyn Birge Vitz, originally published by Harper & Row in 1995, now available in paperback from Ignatius Press.