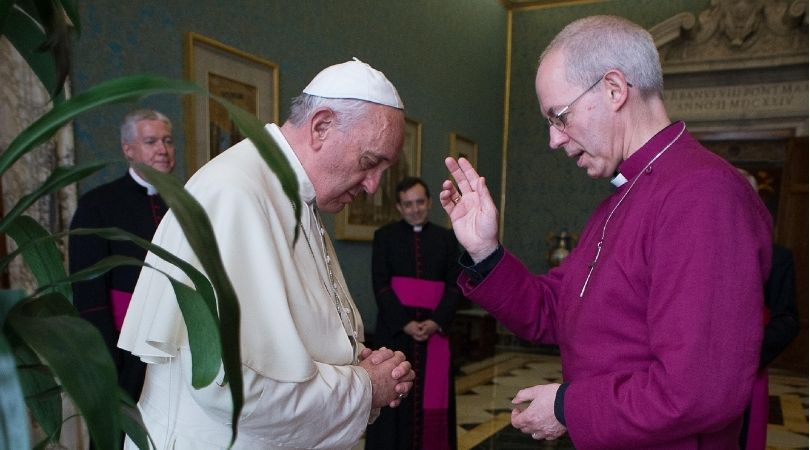 VATICAN CITY (ChurchMilitant.com) - Pope Francis has reiterated his call for union with Anglicans, despite irreconcilable differences between the Catholic Church and the Anglican Communion on women's ordination and same-sex marriage.

The pontiff told members of the Anglican–Roman Catholic International Commission on Friday that "visible unity between us" was the goal Jesus "desires and indicates to us," and such unity "is a unity to be welcomed with humility" and "as a grace of the Spirit."

"Ecumenical dialogue is a journey. It is much more than talking together. No, it is doing, doing, not just talking," Francis exhorted. "The road to unity is superior to conflict."

"The sins that led to our historical divisions can only be overcome in humility and truth, starting to feel pain for mutual wounds and feeling the need to give and receive forgiveness," the pontiff emphasized.

Francis asked the ARCIC members to ensure the contribution of the Anglican Communion to the synodal process begun by the Catholic Church, describing Anglicans as "precious travel companions" on the synodal journey.

The sins that led to our division can only be overcome in humility and truth.

Quoting St. Paul's letter to the Philippians (3:13–14), the Holy Father reminded his audience that the journey to unity "was a question of moving forward, leaving behind the things that divide, in the past as in the present."

"Any search for a deeper communion can only be an exchange of gifts, where each assimilates as his own what God has sown in the other," Francis said. "The gifts of the Spirit are never for the exclusive use of those who welcome them" but "blessings for the entire people of God."

Former chaplain to Queen Elizabeth II Dr. Gavin Ashenden told Church Militant that "the pope's remarks can only constitute ecumenical flattery — rich in existential stroking but as equally impoverished in terms of anything potentially concrete."

Anglicanism, regrettably, lacks any doctrinal internal coherence, consisting, as it does, of a range of different and mutually antagonistic ecclesial positions. In fact, it is so unstable that it is already in the process of a series of global schisms.

As so many Anglican converts to Catholicism reiterate, the only honorable and theologically coherent ecumenism for the Catholic Church is to invite those who have been born into schism to joyfully return and heal the Body of Christ from the ravages of ancestral history.

But in his address, the pope alluded to the difficulties inherent in a potential union with provinces of the Anglican Communion that have legislated in favor of same-sex marriage and the ordination of women bishops, priests and deacons.

The only coherent ecumenism for the Church is to invite those in schism to joyfully return.

"Speaking frankly about ecclesiological and ethical issues, discussing how uncomfortable it is for us, is risky. It could increase distances rather than favor the encounter. Instead, we think that this requires humility and truth as the fundamental conditions," Francis reasoned.

"So we begin, admitting our efforts with humility and honesty. This is the first step; do not take care to appear beautiful and confident in front of your brother, presenting yourself to him as we dream of being, but show him, with an open heart, what we really are and also show our limits," he added.

The pontiff noted that, in a few weeks, he would be taking a concrete step towards ecumenism by traveling with Anglican archbishop Justin Welby and moderator of the Church of Scotland Jim Wallace to South Sudan.

Francis revealed he had already postponed the trip "due to the difficulties of the country," but Abp. Welby had sent "his wife before him to do the works of preparation and charity."

"Let us pray that it will inspire the Christians of South Sudan and the world to be promoters of reconciliation, weavers of harmony capable of saying no to the perverse and useless spiral of violence and weapons," Francis said.

ARCIC was established by archbishop of Canterbury Michael Ramsey and Pope Paul VI in 1967 and has published several statements of agreement on issues of doctrine, including documents on the Eucharist, Mary, Holy Orders, justification and the Church.

In his audience with ARCIC members, Francis referred to the 2018 statement titled "Walking Together on the Way."

The statement acknowledges that "the ordination of women to the presbyterate and episcopate" and "decisions by some Anglican churches in relation to matters of human sexuality have raised serious questions for the Roman Catholic Church about the dispersed nature of the structures of authority within the Anglican Communion."

"From the Anglican perspective, some critics have questioned the desirability of pursuing the stated goal of unity with the Roman Catholic Church, on the grounds of a perceived centralization of authority as well as anxiety about limitations on the decision-making roles of the laity," it added.

The 2018 ARCIC statement also warned that the establishment of personal ordinariates for Anglicans to enter into full communion with the Catholic Church "is seen as further reason for caution by some members of the Anglican Communion."

In October, Anglican bishop Dr. Michael Nazir-Ali, a member of ARCIC for many years, was received into the Ordinariate of Our Lady of Walsingham, despite Pope Franci's efforts to dissuade the prelate from converting to Catholicism.

While ARCIC is endorsed by the Pontifical Council for Promoting Christian Unity, the Vatican's Congregation for the Doctrine of the Faith has sometimes been critical of the joint declarations.

The CDF noted that the statement on "salvation and the Church" can "be interpreted in a way that conforms with Catholic faith" even though "it does not present a complete teaching on this question and even though it contains several ambiguous formulations."

The Vatican's doctrinal watchdog said its judgment on the report was "substantially positive" but it was not "at the point of being able to ratify the final affirmation" that the Catholic Church and the Anglican Communion "are agreed on the essential aspects of the doctrine of salvation and on the Church's role within it."

TOPICS: Apologetics; Catholic; Theology; Worship
KEYWORDS: apostatepope; frankenchurch; heretics; homos
In October, Anglican bishop Dr. Michael Nazir-Ali, a member of ARCIC for many years, was received into the Ordinariate of Our Lady of Walsingham, despite Pope Franci's efforts to dissuade the prelate from converting to Catholicism.

The apostate, Bergoglio, is no shepherd, bringing in lost sheep; he's wolf, driving them away.

Why not? Both “churches” are soft on homosexual pedophilia.

Invisible unity has been working well for a long time, don’t fix what isn’t broke.

One upon a time, this would have made sense, but the current leadership of the Anglican Communion outside of the African churches do not believe in God, so I don’t see how this could work.

Does Francis believe in God?