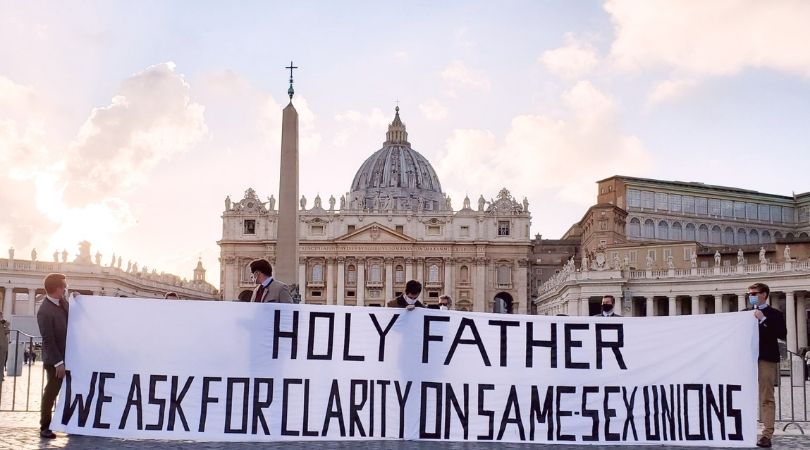 Tschugguel led a band of faithful Catholics from Castel Sant'Angelo — where the Catholic convert had dumped five Pachamama idols into the Tiber River during the Amazon Synod — to the Vatican in protest against the pontiff's repudiation of Catholic teaching.

As over 50 Catholics knelt praying the Rosary in front of St. Peter's Basilica, hundreds of onlookers gathered to witness the demonstration.

A veteran Vaticanist who was at the scene told Church Militant he'd never seen anything like it before and commented how long police took to clear the protest.

"On a previous occasion when a much smaller banner was raised, police ordered it taken down in less than a minute," he remarked. "Today, it took them over 15 minutes to bring the demonstration to a halt."

In an interview at Castel Sant'Angelo, Church Militant asked Tschugguel why he was asking for clarity when the pontiff was on record declaring his support for gay civil unions on multiple occasions.

Tschugguel said he wanted to clarify if the pontiff was seeking to opt for the lesser evil of same-sex civil unions in the face of the greater evil of gay "marriage."

But LGBT activists all over the world were claiming that "this is the first step in changing the doctrine of the Catholic Church regarding homosexual relationships and we hope to know this is not what the Holy Father meant to say," Tschugguel emphasized.

We want to believe that the Holy Father sees everything in the light of the teaching of the Church, but it gets harder for us every day.Tweet

The pope's words are now being used to "promote an anti-Catholic LGBT agenda," noted the Austrian political activist and founder of St. Boniface Institute.

"We do believe that the Holy Father does not want President [Nicolas] Maduro of Venezuela, for example, to say that his words encouraged him to introduce homosexual marriage," Tschugguel pointed out.

"An Austrian bishop said that he's very happy that the pope is [commending] something that is 100% introduced in Austria already. By that I think he means homosexual marriage, which was introduced last year."

"We want to believe that the Holy Father sees everything in the light of the teaching of the Church, but it gets harder for us every day. And we as faithful Catholics don't want to talk behind his back."


Tschugguel said he hoped Pope Francis would do a brief interview with the global media to clarify the situation.

Church Militant asked how Tschugguel would respond if Pope Francis said he would approve celibate same-sex unions, especially in the light of the Church of England using a similar strategy for partnered homosexual clergy and the consequent opening of the floodgates of gay marriage.

You only take a step if you know there is another step coming after it.Tweet

Tschugguel warned that as a pro-life campaigner he had noticed how civil unions were always the first step in leading to gay marriage. He quoted LGBT activist Fr. James Martin, S.J., as making it explicit that this is a "first step toward supporting LGBT people in the Church."

"You only take a step if you know there is another step coming after it," Tschugguel remarked, explaining that if a brother and sister wanted to live in a celibate partnership and if they wanted the other person to inherit their property, they could always draft a will without any need for a civil union.

The step of civil union would be followed by the adoption of children and in the past Pope Francis was a "big enemy" of children being adopted by gay couples, Tschugguel said.

Tschugguel said he didn't "want anything bad to happen because of our action today. We just want to respectfully ask the Holy Father to give us clarity on this."

"We don't know what the Holy Father really said, but now we are here to ask the Holy Father: Please, please, bring us clarity on homosexual unions," Tschugguel pleaded. "Please go out to the cameras, please go out to the microphones to explain to the people how you really meant this and what the context of … this interview was, and how the Catholic teaching is still the Catholic teaching."

TOPICS: Apologetics; Catholic; Moral Issues; Religion & Politics
KEYWORDS: apostatepope; francischism; homos
But LGBT activists all over the world were claiming that "this is the first step in changing the doctrine of the Catholic Church regarding homosexual relationships and we hope to know this is not what the Holy Father meant to say," Tschugguel emphasized.

Bergoglio will no sooner answer this query than he has the cardinals' dubia which was presented to him 1496 days ago.

Ninetheless, the Pachamama Slayer made his point clearly and deftly and deserves a lot of credit for his efforts.

It’s remarkable how the converts to the Faith (like Tschueggel) seem to be the most passionate in defending it.

Taylor Marshall is also a convert to Catholicism.