VATICAN CITY (ChurchMilitant.com) - The Vatican is promoting a new interreligious document on the Wuhan virus pandemic in collaboration with the world's largest organization of non-Catholic churches.

Co-published by the Pontifical Council for Interreligious Dialogue (PCID) and the World Council of Churches (WCC), "Serving a Wounded World in Interreligious Solidarity: A Christian Call to Reflection and Action During COVID-19 and Beyond" renews Pope Francis' call to "ecological conversion." 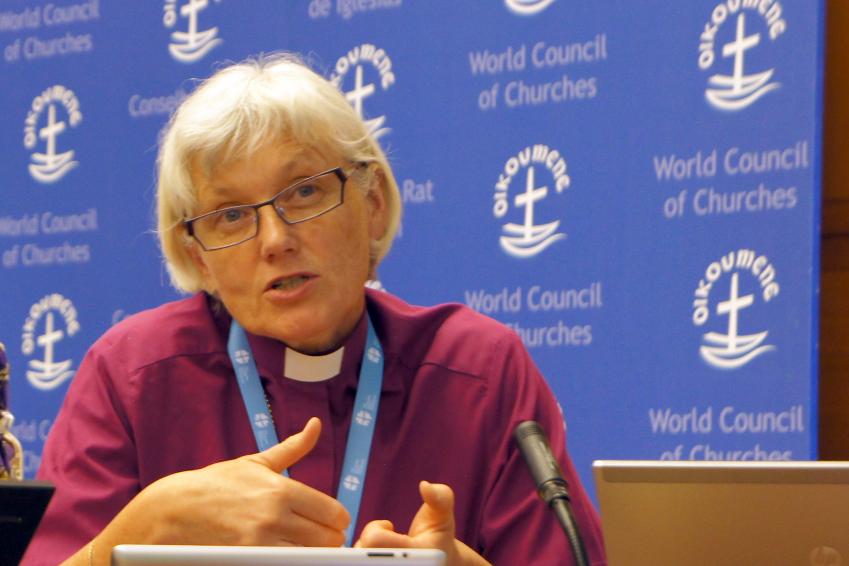 "What does it mean for Christians to love and serve our fellow human beings in a world in which the COVID-19 pandemic has inflicted widespread suffering?" the 24-page publication, released Thursday, asks.

As an answer, the PCID and WCC exhort Christians to "promote a culture of inclusivism which celebrates difference as God's gift" and "create space for dialogues that are embracing and inclusive."

The joint document urges believers in Christ to "learn from members of other religions about their motivation, principles and recommendations for working in interreligious solidarity, so that we may grow closer both in understanding and cooperation."

"We urgently need an ecological conversion of attitudes and actions to care more effectively for our world, paying attention to the groaning of the creation," the document states, using the word "conversion" only once and failing to issue a call for the evangelization of the lost.

In a theological analysis of the document conducted exclusively for Church Militant, Dcn. Nick Donnelly notes that "the Vatican-WCC document makes the fatal mistake of assuming that religious experience is the same everywhere, no matter the religion."

"It falls into the error of subjectivism when it states that 'Hope is an essential feature of all religions,' as if Christian hope is the same as Muslim hope and Hindu hope," Donnelly observes.

The error of subjectivism inevitably leads to the heresy of syncretism.Tweet

"For the Christian, hope is not a human-derived psychological state but a theological virtue of the Holy Spirit that originates in the event of Our Lord's death, resurrection and glorification," he notes.

"The error of subjectivism inevitably leads to the heresy of syncretism," he warns. "Promoting cooperation in the face of a global crisis is good and necessary, but not at the cost of denying fundamental doctrines of the Faith."

Pope Francis spoke at a WCC gathering June 21 in Geneva

For Donnelly, "the document makes the egregious error of implying that the Holy Spirit is at work in other religions and is something that we all have in common when they write, 'When we are in solidarity with others, we are connected by the work of the Holy Spirit. The Holy Spirit "blows where it wills" (John 3:8).'"

"But it is contrary to the Catholic faith to 'hold that the salvific action of the Holy Spirit extends beyond the one universal salvific economy of the Incarnate Word' (CDF, 2001)," he asserts.

Such fudges and contradictions, like those in this Vatican-WCC document, are in danger of creating a syncretistic one-world religion.Tweet

This document also misuses the doctrine of 'God's family' by wrongly claiming we are brothers and sisters due to being created in the image of God. The truth is that we can only become members of God's family through filial adoption, by being baptized into the death and resurrection of Christ and receiving sanctifying grace. Such fudges and contradictions, like those contained in this Vatican-WCC document, are in danger of creating a syncretistic one-world religion under the cover of the COVID-19 pandemic. 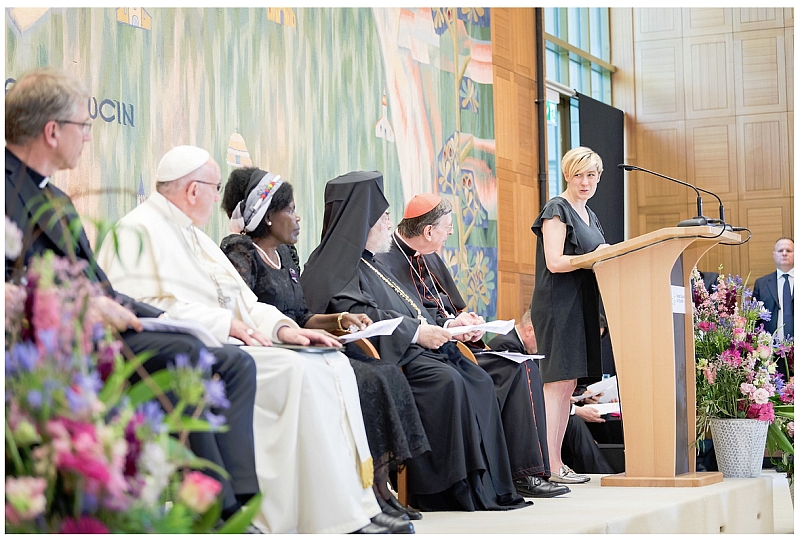 Pope Francis at the WCC ecumenical summit in Geneva

Affirming Donnelly's conclusions, a Rome-based scholar of religions told Church Militant that "the fake interreligious claims of the pontifical document were patronizing at best and insulting at worst to practitioners of other religions."

"The Vatican has made little progress in genuinely understanding true religious diversity since the interreligious hippie heyday of the '60s," she said, adding:

Pope Francis simply fails to understand how different religious have diametrically opposed worldviews of reality. A Hindu monist thinks creation is an illusion (maya). How can you call him to an 'ecological conversion'? A Hindu coronavirus victim might assume she is being punished for the sins of a previous existence and fated by his karma.

"Muslim leaders have said they regard the pandemic as Allah's punishment on a sinful world. I quote from a French news source: 'Most imams see the virus as a divine test for all humanity, including Muslims, to return to the path of righteousness,'" the scholar, who spoke on condition of anonymity, observes.

"Religions do not share universal values. This is the myth of the Enlightenment," she stresses.

Nevertheless, the Vatican-WCC document emphasizes a need for "universal and shared ethical and spiritual values to inject a new hope into the pandemic-ravaged world."

Through its 'liberation theology,' the WCC has for decades infused liberal churches with neo-Marxist, anti-capitalist [and] anti-West attitudes.Tweet

"In this respect, religions can offer a precious contribution to reawaken and guide humanity in building a new social order at the local, regional, national and international levels," it declares.

Over the last decades, the WCC has faced severe criticism for its political agenda, its anti-Israel bias, its capitulation to religious pluralism and its abandonment of evangelization on the uniqueness of Christ. 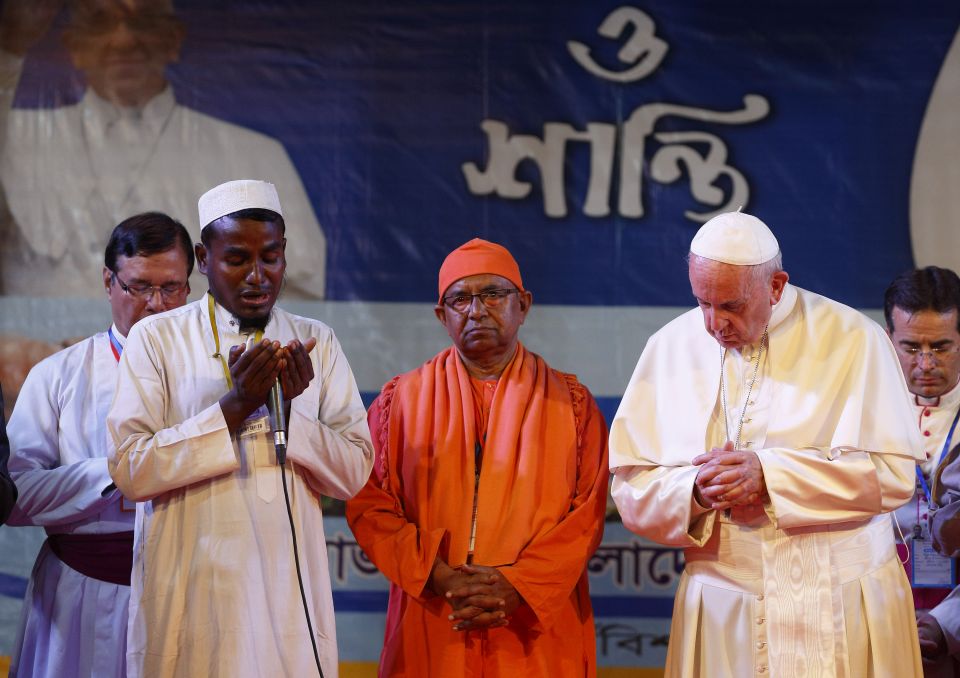 "The WCC has played a key role in turning much of the world against Israel. Through its 'liberation theology,' it has for decades infused liberal churches with neo-Marxist, anti-capitalist, anti-West attitudes — thus placing a virtual halo over the anti-Semitism of the Left," observes distinguished Jewish author Melanie Phillips.

The WCC, comprised of around 300 churches, redefined the biblical concept of salvation as liberation from economic exploitation, political authoritarianism, sexism and racism, a peer-reviewed study from the Chatham House think tank reveals.

The study also slams the WCC for its "double standards" in identifying "racism (especially white racism), imperialism and capitalism as the enemy" in "stark contrast to its marked reluctance to make critical pronouncements about the nature and policies of communist regimes."

"WCC leaders have learned to live with this double-standard policy — a lot of stick for the wicked imperialists and capitalists and kid-glove treatment for the communist governments," writes K.F. Cviic in his journal article "The Politics of the World Council of Churches," published in the Royal Institute of International Affairs.

The WCC's "notoriety" derives from "the ardor with which it espouses social and political causes; and in the process of doing so, the clear and consistent preference it shows for radical solutions and elites," notes Ernest W. Lefever, American political theorist and foreign affairs expert.

WCC leaders, he claims, "are active in a global network of radical academics, scientists, journalists and politicians that provides training and money for 'liberation' efforts driven by Marxist-Leninist fervor."

In the '60s and '70s, the WCC became notorious for funding Marxist-guerilla outfits in Africa and Latin America. It continues to aggressively promote Marxist-liberation theology, globalism, environmentalism and religious pluralism.

Faithful Catholics slammed an earlier Vatican document on the Wuhan pandemic from the Pontifical Academy for Life for omitting "God" in order to reach "the widest possible audience."

TOPICS: Catholic; Religion & Culture; Religion & Politics
KEYWORDS: apostasy; francischism; nwo; wcc
"We urgently need an ecological conversion of attitudes and actions to care more effectively for our world, paying attention to the groaning of the creation," the document states, using the word "conversion" only once and failing to issue a call for the evangelization of the lost.
1 posted on 08/29/2020 3:07:20 PM PDT by ebb tide
[ Post Reply | Private Reply | View Replies]
To: Al Hitan; Coleus; DuncanWaring; Fedora; irishjuggler; Jaded; JoeFromSidney; kalee; markomalley; ...

The “groaning of creation” that St. Paul was speaking of was for the Redemption of Jesus Christ- it would have been nice to have mentioned Him.

Then Poopus would probably believe in feeding live children to Molock.