Eddie James, a veteran black worship artist and minister who joined a diverse coalition of artists like Kari Jobe and her husband, Cody Carnes, at the White House Dec. 6 to worship and pray with President Donald Trump, has pushed back at critics of the group, telling them to “check your heart” if they found the visit problematic.

“Anyone who has a problem with us worshiping at the #WhiteHouse and praying for President @realdonaldtrump need to prayerfully check your heart! Everything this nation needs is found in Jesus! The beautiful people in this picture released His presence and it was amazing. There was an open Heaven over the #WhiteHouse. #Republican, #Democrat, or #Independent; if you are a #Christian, you would be moved at what God did on this day. I could NOT have been more proud of the #worship #movement of our nation! I am humbled that I am even in this picture,” James wrote in a post on Instagram in which he shared a photo of a group of about 40 people. 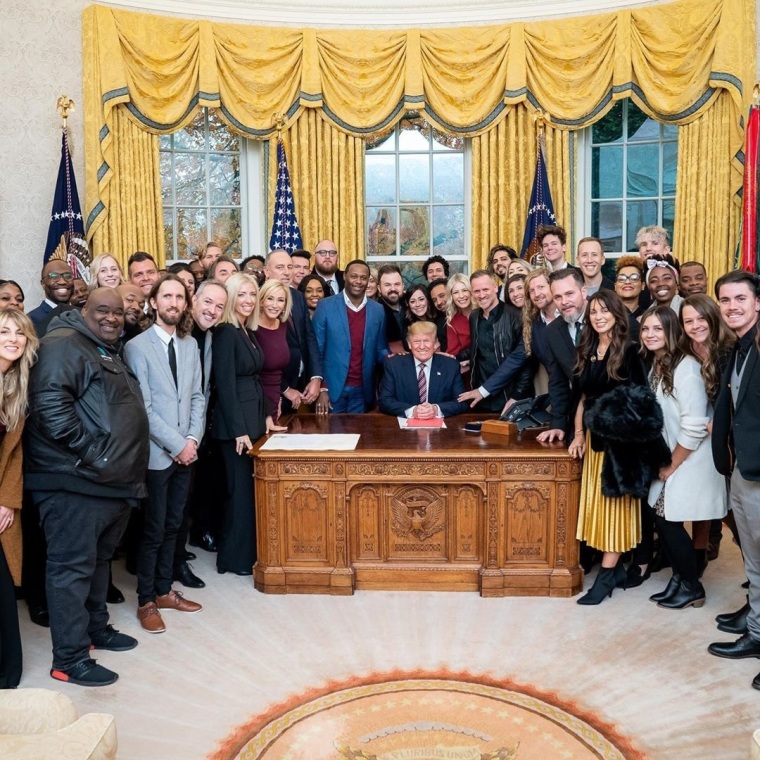 In a video posted by The White House on Twitter, Jobe and her husband said she was thankful to learn about how the Trump administration was working to help the marginalized and victims of human trafficking during the visit.

“We’ve just got to be with a part of the group today that just got to be a part of praying in the Cabinet Room and in the Oval Office for President Trump and got to listen to a lot of the faith briefing things that are going on in the White House, religious freedom and things like that,” Jobe said with her supportive husband at her side.

“The thing that moved me the most is just how everyone is so for making sure we’re changing people’s lives and not leaving those that are marginalized and those that have been trafficked. Sometimes, I think that for those of us that don’t work in the White House it can look really big. Like something that we can’t even end, but they’re working to end these things. Change these things. I’ve just been in tears all day. I’m just so thankful to be part of this today and to see what God’s doing in our White House,” she said.

“We’ve gotten to worship, we’ve gotten to pray for our president, and I just have been so encouraged today because there have been so many good things happening out of this House for the faith community and the world,” Carnes added.

.@karijobe and @codycarnes shared about their visit to the White House with fellow worship leaders! pic.twitter.com/wTQE6EEvVr— The White House (@WhiteHouse) December 9, 2019

.@karijobe and @codycarnes shared about their visit to the White House with fellow worship leaders! pic.twitter.com/wTQE6EEvVr— The White House (@WhiteHouse) December 9, 2019

I was invited to participate in a #WorshipGathering at the #WhiteHouse, listen to our nation’s greatest leaders and pray for #PresidentTrump!! Thank you @paulamichellewhite for this opportunity!! Thank you @codycarnes and @karijobe for leading us today!! It’s just the beginning of amazing things to come!! #EddieJames #NothingElse

But not everyone supported the actions of the group of worship leaders.

Jory Micah, a Christian writer, preacher and feminist who revealed in a tweet Tuesday that Jobe was her Bible college roommate, said she was “depressed” by the worship artist’s actions.

“I love her, which is why I can’t help but be depressed to see @karijobe fall into nationalism. I know she knows Jesus. I know she cares for the marginalized, but she is ignoring the fact that Trump is literally caging babies at our border,” Micah wrote without stating whether she also spoke out against the Obama administration's use of the same detention facilities.

Co-host of the Real Hawk Talk podcast, Evan Hill, argued that Jobe and her husband were “selling out Jesus for such cheap, temporary power.”

“One of the greatest disappoints of my life has been watching faith leaders back an oppressive, racist, sexual predator as President. Selling out Jesus for such cheap, temporary power. Shame on you @karijobe @codycarnes,” Hill wrote on Twitter.

Jawn Murray, television host and pop culture expert, implied in a post on Facebook that the black leaders in the photo were poster children for self-hatred.

“Seeing these skinning and grinning Black singers at the White House with that fake, charlatan ‘preacher’ Paula White surrounding Donald Trump is shameful. I don't care that they claim they were there praying for Trump. To pray for this man is to ask God to bless the sin against humanity that he regularly commits against Black people and all the other marginalized groups in this country,” Murray wrote.

“Here's my prayer, I pray that so-called Christians will learn that loving God doesn't meaning denying your cultural existence and disrespecting your race. And anyone skinning and grinning in a photo with a racist, bigot, demagogue like Trump is the poster child for self-hatred,” he added.

Where is Mrs. Journey in the picture?

TDS is located in the Mind not the Heart and they/Dims/Libs/commies/1 worlders/never Trumpers have all lost theirs.

It’s all about skin color to the left.

Trump is like that movie Monty Python and the Holy Grail — he might as well go around with a wheelbarrow shouting, “Bring out your hypocrites!” Hard to believe the hatred spewing from “friends” of these pastors.