ROME, October 10, 2019 (LifeSiteNews) — Following the Vatican’s second attempt to deny claims by atheist Italian journalist, Eugenio Scalfari, that Pope Francis told him he doesn’t believe in Christ’s divinity, Archbishop Carlo Maria Viganò is urging the Pope himself to give a “clear answer.”

In comments to LifeSiteNews after Thursday’s synod press briefing and denial of Scalfari’s claim, Archbishop Carlo Maria Viganò said: “Let your ‘yes’ be ‘yes,’ and your ‘no’ be ‘no.’”

“Why doesn’t the Pope use the language of simple people, while he invites people ‘Cher jaleo,’ to create chaos, confusion and division. Is this the mission of the Pope? Hacer jaleo.”

At the end of Thursday’s synod briefing, the Prefect of the Vatican’s Dicastery for Communications, Paolo Ruffini, insisted that the Pope “never said what Scalfari wrote.”

“Both what was reported in quotation marks as well as the free reconstruction and interpretation by Mr. Scalfari — the conversation dates back more than two years — cannot be considered a faithful account of what the Pope said and [what he said] can instead be found in all of his magisterium and that of the Church about Jesus, true God and true Man,” said Ruffini.

LifeSite asked Archbishop Viganò: “In what sense was Ruffini’s further clarification insufficient, given that he explicitly referred to Jesus as “true God and true Man?”

“In the sense that Christians expect a clear answer from the Pope himself. The thing is too important; it is essential: Yes, I believe that Christ is the Son of God made Man, the only Savior and Lord,” Archbishop Viganò replied.

“All Christians await this clarification from him, not from others, and by virtue of their baptism have the right to have this response.”

While the further clarification from Ruffini is widely seen as a step in the right direction, both high-ranking clergy and ordinary Catholics are asking the same question: why does it take over two tries and over twenty four hours to clarify a matter regarding a truth as central to the Christian faith as the divinity of Jesus Christ? And why does Pope Francis, who has granted Scalfari several interviews over the years, not himself confirm the brethren in the faith and distance himself from a man who is sowing confusion?

A priest in Rome pointed out that the confusion generated by Scalfari, who is numbered among the Pope’s favored interviewers, is compounded given the “Document on Human Fraternity” that Pope Francis signed with a Grand Imam Ahmad el-Tayebin February, and which states: “The pluralism and the diversity of religions, color, sex, race and language are willed by God in His wisdom.”

He argued that if the Pope states that all religions are willed by God in the same manner as sex, race or color, Catholics begin to question the truth of the divinely revealed truth that Jesus Christ is the Second Person of the Most Holy Trinity, the Incarnate Word and only Savior of the world.

American Capuchin priest and scholar Father Thomas Weinandy echoed this view in a recent article for The Catholic Thing titled, “Pope Francis and Schism.” The Abu Dhabi statement, he said, “directly contradicts the will of the Father and so undermines the primacy of Jesus Christ his Son as the definitive Lord and universal Savior.”

Pope Francis has granted the 95-year-old Scalfari (who doesn't use a tape recorder) several interviews since the beginning of his pontificate, with similar and predictable effect. In March 2018, Scalfari claimed the Pope told him that hell does not exist. La Repubblica, an Italian daily which Scalfari founded, claimed that Francis has told him the souls of those who do not go to heaven are annihiliated. Annihilationism is a heresy according to the Catholic Church.

At the time, the Vatican disputed the claim, insisting the Pope does believe that hell exists and that “no quotation of the article should be considered a faithful transcription of the words of the Holy Father.”

Pope Francis, refusing to kneel at the prie dieu reserved for him, before Jesus Christ. 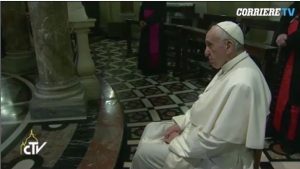 Pope Francis, gets tired of standing and takes a seat before his Lord and his God.

I’m not Catholic but I believe the Catholic church is the foundation of western culture. We’re entering (entered) the second dark ages.

I am Catholic and I don’t believe in this pope.

If all religions are willed by God, then what’s the point? They’re contradictory with one trying to kill off all the others.

Thinking Francis response is going to be even more astonishing

Its no the RCC, it is Christianity that is the foundation of western culture.

His best bet is to not dignify this allegation with an answer. It wouldn’t solve anything. It wouldn’t be believed by those who don’t believe now nor would it change any minds or hearts.

10 posted on 10/10/2019 5:44:49 PM PDT by DuncanWaring (The Lord uses the good ones; the bad ones use the Lord.)
[ Post Reply | Private Reply | To 1 | View Replies]
To: sasportas; Damifino
Yes, you are quite right. But for the first 1000 years, Catholicism and Christianity were coterminous, from Iraq to Portugal and from Iceland to Alexandria and beyond.

And after the break between East and West (circa 1054 AD) Catholicism remained the name of Christianity in the West for nearly another 500 years.

So Catholic Christianity was the foundation of Western culture.

Pope hand-picked this newspaper and gave Scalfari carte blanche. They are old friends. This is not a simple matter for clarification from the vatican press office.

This quotation is currently the most urgent metaphysical issue in the world. If the quotes are false, why is the chiacchierone not running to the nearest microphone to denounce the words?

This quotation is currently the most urgent metaphysical issue in the world. If the quotes are false, why is the chiacchierone not running to the nearest microphone to denounce the words?
Or constructing an image of him tied to a stake and burned in effigy