Four student evangelists from Wheaton College in Illinois are suing the Chicago city government over a set of rules that they say are restricting their freedom of speech and religion at a popular park.

The students are members of the Chicago Evangelism Team sponsored by the Office of Christian Outreach at Wheaton College, an evangelical institution based in the Chicago suburbs.

The students contend they have faced opposition and at times have been prohibited by security from evangelizing at Millennium Park, a 24-acre downtown venue that hosts a range of activities including concerts, theatre, dance performances, art shows, and nature walks.

The Chicago Evangelism Team exists to “proclaim the Gospel in the city of Chicago to whomever we find there.” The group would commute to the city on Friday nights to share the Gospel with those willing to listen and engage with them.

“We desire to exercise our constitutional right to free speech through sharing the Gospel of Jesus Christ,” sophomore Matt Swart said in a statement. “For the sake of every citizen who desires to make use of the rights our forefathers bled for, we pray that the City of Chicago amends their unconstitutional code.”

As of Wednesday, the law group was in the process of filing a motion in federal court for a preliminary or permanent injunction against a set of rules that govern behavior at Millenium Park.

“By its nature in history, public parks have always been completely open to speech activities,” associate attorney Sorin Leahu told The Christian Post.

According to the legal complaint, one restriction put in place by the city is a ban on “disruptive conduct.”

Specifically, the policy states that “[a]ny conduct, even if not specifically noted in these rules, is prohibited in the park if it interferes with or disrupts another visitor’s peaceful enjoyment of performance or amenity in the Park …”

When the group went to Millennium Park on December 7 of last year to engage in open-air evangelism and distribute Christian literature at the park, the complaint alleges that the students were informed by security staff that they could not hand out the literature or preach.

The students contested that they had the legal right to preach from a public sidewalk. The security guard didn’t argue with them but told them that he was just doing his job.

The students eventually asked to speak with a park supervisor. According to the lawsuit, two supervisors told the students they were “soliciting” the public to subscribe to their beliefs.

The supervisors argued, according to the lawsuit, that their activities were in violation of a Chicago ordinance prohibiting “solicitation” on the park sidewalk between Randolph Street and Roosevelt Street.

A week later, the students returned to the park to evangelize but were again stopped by security staff.

Over the course of the weeks that followed the students continued to try to evangelize at the park but “continued to face hostility and opposition from Park employees frustrating their ability to preach or distribute free religious literature.”

“Park employees, for example, prohibited the Students’ activities near ‘the Bean’ [tourist attraction] directing them to other parts of the Park, only later to prohibit them from those parts of the Park as well,” the complaint reads.

“On at least one occasion, a Park employee informed the Students that they could not discuss religion in the Park and ordered the Students to leave the Park if they wanted to talk about religion.”

The lawsuit claims that the pattern continued until about April 5, 2019, when one of the students was approached by Christopher B. Deans, a recreational operations manager. Deans provided the student with a set of newly enacted rules.

Among the rules was a requirement that individual speakers must receive approval from two city departments before they can speak at the park.

The rules restrict the passing out of written communications to just two areas of the park and the sidewalks in and around the park. The rules also split sections of the park up into 11 “rooms” that serve their own individual purpose.

“Separating rooms does not change the character of a public park,” Leahu said. “Many public parks have amenities and art exhibits, statues, monuments and so forth. Just because you put these things in the park doesn’t mean you can call it a room.”

The students also object to a section of the policy that states that they can’t “objectively” interfere “with visitors’ ability to enjoy the Park’s artistic displays” and argued that there is no explanation for what “objectively interferes” means.

“Without any standards for making such a determination, lawful conduct, including speech activities, could be censored,” the lawsuit claims. “Without any standards, any person who disagrees with a speaker may, by force of the Rules, silence the speaker simply because the speaker, by expressing views disagreeable to a particular listener, ‘interferes’ with a person’s enjoyment of the art.”

The complaint claims that the new rules violate the First Amendment rights of the students as well as rights guaranteed under the Illinois Religious Freedom Restoration Act.

“They don’t use volume. They do what you would expect anyone going to the park to do: have conversations with people, engage people, hand out literature,” Leahu said. “It is nothing disruptive to what anyone else is doing in the park.”

John Mauck, the head attorney working on the case, argued that there is a “huge amount of room” in the park and that students were not crowding anybody else out.

“With street preaching, you are not going to be drowning anybody out because there are hundreds of people coming and going,” he said. “When you evangelize, you want to go where the people are.”

“We need to protect civil liberties vigorously so we don’t get into a situation as they have in Hong Kong where the rights are gradually taken away and then you have civil unrest,” he added. “We want to hold the line here for the Gospel and for everybody else.”

Bill McCaffrey, a spokesperson for the city's law department, told The Chicago Tribune that comment could not be made on the complaint and motion for an injunction because the department has not received a copy of them yet.

“However, the new rules protect First Amendment rights while also respecting the rights of patrons to use and enjoy the park,” McCaffrey contended in an email to the newspaper. 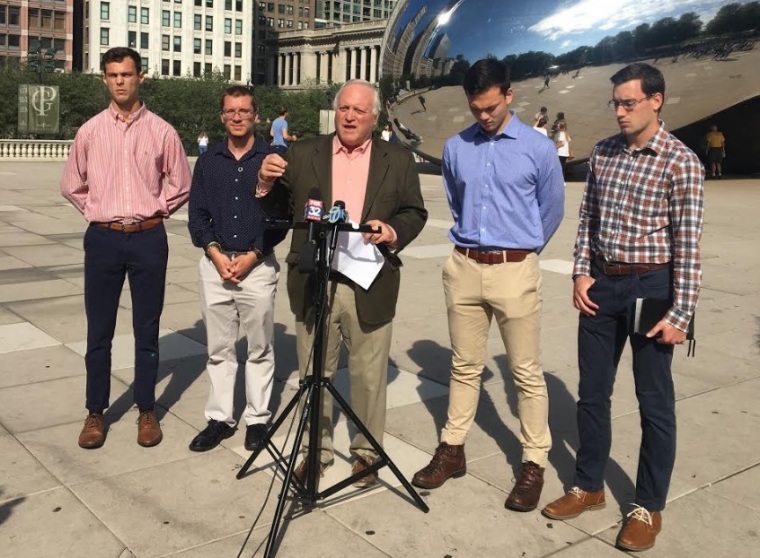 Attorney John Mauck speaks during a press conference about a legal complaint filed on behalf of four Wheaton College students at Millennium Park in Chicago, Illinois on Sept. 18, 2019.
1 posted on 09/19/2019 8:30:07 AM PDT by SeekAndFind
[ Post Reply | Private Reply | View Replies]
To: SeekAndFind

Wheaton is a great college. In 20/20 hindsight I wish I had gone there.

Yet it’s okay that these progressives “evangelize” to my children every day at school regarding their religion of “progressivism” ....

Good thing they weren’t smoking or vaping. They’d’ve been shot on sight.

We might make a donation to Wheaton for this.

Moonies are allowed in airports. Hopefully they will win easily.

But any progressive collection of clowns could hold a “Come and see our mental problems” seminar there and they’d be applauded.

8 posted on 09/19/2019 8:57:20 AM PDT by dfwgator (Endut! Hoch Hech!)
[ Post Reply | Private Reply | To 6 | View Replies]
To: SeekAndFind
These political elites who continue to categorize and criticize "baskets" of citizens who oppose their coercive ideology might consider the words of the man known as "the father of the Constitution" under which they serve:

Excerpt "Because we hold it for a fundamental and undeniable truth, “that Religion or the duty which we owe to our Creator and the Manner of discharging it, can be directed only by reason and conviction, not by force or violence.”

"The Religion then of every man must be left to the conviction and conscience of every man; and it is the right of every man to exercise it as these may dictate. This right is in its nature an unalienable right. It is unalienable; because the opinions of men, depending only on the evidence contemplated by their own minds, cannot follow the dictates of other men: It is unalienable also; because what is here a right towards men, is a duty towards the Creator. It is the duty of every man to render to the Creator such homage, and such only, as he believes to be acceptable to him. This duty is precedent both in order of time and degree of obligation, to the claims of Civil Society. Before any man can be considered as a member of Civil Society, he must be considered as a subject of the Governor of the Universe: And if a member of Civil Society, who enters into any subordinate Association, must always do it with a reservation of his duty to the general authority; much more must every man who becomes a member of any particular Civil Society, do it with a saving of his allegiance to the Universal Sovereign. We maintain therefore that in matters of Religion, no man’s right is abridged by the institution of Civil Society, and that Religion is wholly exempt from its cognizance."

Is there anywhere a clearer statement of the underlying principle of the U. S. Constitution's provisions and protections for "the People's" rights and liberties?

The very foundation of the Founders' Declaration of Independence from a "government-over-people" rule to one of a people's recognition of "overruling Providence" and "people-over-government" liberty was summarized in Jefferson's, "The God who gave us life, gave us liberty at the same time: the hand of force may destroy, but cannot disjoin them."

In our generation, do we not see that "hand of force" unmasked at the same time as that same "hand" not only is reluctant to recognize Madison's "Creator," "the Governor of the Universe," and "Universal Sovereign," or Jefferson's "the God who gave us life," but utilizes that "hand of force" to deny public discourse to include those descriptions in its "politically-correct" discourse or teaching of the youth of America?

so the 1’st amendment is now only allowed in certain designated public areas? Who gets to decide what speech is acceptable, and what isn’t? (And yes, you can yell fire in a crowded theater- infact you should when there is a fire- so that isn’t a valid argument against 1’st amendment in public spaces-

I remember a time when Chicago parks allowed honest-to-god Neo Nazis to give speeches there in the name of the First Amendment.

Tolerance is to be unilateral, and extended only to leftists: Herbert Marcuse.

Hypocrisy is literally mandated; all is by design.