In a speech in Kidapawan City, Cotabato, the President attacked the doctrine of God the Father, God the Son, and God the Holy Spirit as he once again went into a tirade against priests and the Catholic Church.

Before attacking the Holy Trinity doctrine, Duterte said Jesus Christ is “unimpressive” because he had allowed himself to be nailed on the cross.

"Your God was nailed on the cross. How unimpressive. I’m God and you will crucify me? I’d tell them, ‘Lightning, finish all of them. Burn all the non-believers.'"

The passion, death, and resurrection of Jesus Christ is among the central doctrines of Christian faith, with Christians believing that Jesus sacrificed himself to save the world from sin.

The President likewise belittled the belief in saints, whom he previously called as “fools” and “drunkards.”

"Saint Catalina, Saint Anne, Saint Thomas, Saint Sebastian, Saint Rodrigo, they’re nothing… I don’t know them. Look, those documents were written – if at all – 3,000 years ago. Why would they care about our lives now?"

"Who wrote about them? Who’s Saint Thomas? We don’t know who they are. That might even be a name for a cow or camel then"

The President – under whose term a string of priests have been murdered – had previously stirred controversy for calling God “stupid."

On December 6, Duterte even joked that bishops should be “killed” for supposedly doing nothing but criticizing his administration, which is waging a bloody war against drugs that has killed thousands.

id he say ‘silly’ before or after the earthquake?

Maybe it is silly.

But I’d rather have faith in Him than you, Mr. Obviously Flawed Human.

Duterte is in effect, a Jehovah’s Witness, although he does not identify as such.

He might be in the “Iglesia ni Cristo”, another antiTrinitarian cult....very very big in the Philippines.

Duterte was a good man, but I think he is mentally deteriorating and saying stupid things.

China's Spratly island is (imo) a dangerous element in the South Seas and will probably be used to try to capture the Philippines ala WW2 Japan.

I have always hoped Duterte and Trump would become allies.

(No, you shouldn't be surprised at his attitude.)

It was BEFORE the earthquake.

“I’m God and you will crucify me? I’d tell them, ‘Lightning, finish all of them. Burn all the non-believers.’”

Does he ever explain where his sources are and how he comes to his conclusions? It’s definitely not the Bible.

Fools that don’t read the Bible should shut up about it!

It’s like those devils in the NT, ranting. Truth is bubbling forth from offensive places.

He’s no wise man from the east, that’s for sure.

It’s always silly to say that any human can even begin to understand spiritual things, much less to compare and mock them. At best, it’s like an ant trying to understand a giant human.

Maybe now, democrats in the US will be willing to overlook his conduct they earlier described as human rights violations and welcome him into their fold. 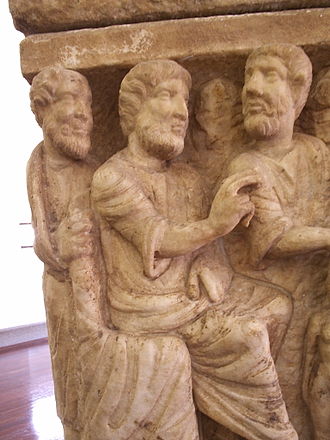 The belief in the trinity itself goes back to at least 100 AD, so it's certainly a part of Christian theology from the start, although it's always had opponents.

What a foolish man. The death and ressurrectuon of Jesus created one of the worlds greatest and largest religious movements. That could not have happened by killing the Romans. Duh. We were given two thousand years, now our time is about up.