Image: The Translation of Saint Rita of Cascia | Nicolas Poussin

Saint of the Day for May 22

Like Elizabeth Ann Seton, Rita of Cascia was a wife, mother, widow, and member of a religious community. Her holiness was reflected in each phase of her life.

Born at Roccaporena in central Italy, Rita wanted to become a nun but was pressured at a young age into marrying a harsh and cruel man. During her 18-year marriage, she bore and raised two sons. After her husband was killed in a brawl and her sons had died, Rita tried to join the Augustinian nuns in Cascia. Unsuccessful at first because she was a widow, Rita eventually succeeded.

Over the years, her austerity, prayerfulness, and charity became legendary. When she developed wounds on her forehead, people quickly associated them with the wounds from Christ’s crown of thorns. She meditated frequently on Christ’s passion. Her care for the sick nuns was especially loving. She also counseled lay people who came to her monastery.

Beatified in 1626, Rita was not canonized until 1900. She has acquired the reputation, together with Saint Jude, as a saint of impossible cases. Many people visit her tomb each year.

Although we can easily imagine an ideal world in which to live out our baptismal vocation, such a world does not exist. An “If only ….” approach to holiness never quite gets underway, never produces the fruit that God has a right to expect.

Rita became holy because she made choices that reflected her baptism and her growth as a disciple of Jesus. Her overarching, lifelong choice was to cooperate generously with God’s grace, but many small choices were needed to make that happen. Few of those choices were made in ideal circumstances—not even when Rita became an Augustinian nun.

Saint Rita of Cascia is the Patron Saint of:

With FR going down and my trip to my grandson’s high school graduation it has taken me a long time to catch up. Thanks for bearing with me.

Saint of the Day Ping! 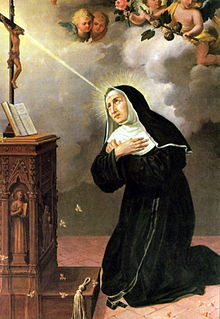 Rita of Cascia, one of my favorite Saints.
4 posted on 06/12/2017 4:31:59 AM PDT by heterosupremacist (Domine Iesu Christe, Filius Dei, miserere me peccatorem!)
[ Post Reply | Private Reply | To 1 | View Replies]
To: heterosupremacist

BTTT for Saint Rita of Cascia