Incorrupt bodies of the Saints -St Charbel Makhlouf -incorruptable (Catholic Caucus)
Miracles of the Church ^ | May 1, 2016 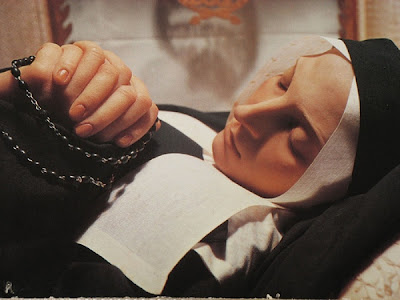 "The Incorruptables" -The incorrupt bodies of certain Saints

What is perhaps one of the most unusual phenomenon regarding the bodies of Saints is that of the miraculous preservation of a great number of them after being interred for years in conditions that normally should have provoked their destruction according to the laws of nature, and even more so because in almost every case of incorruption in the lives of the Saints the bodies were not embalmed or preserved in any way. Yet in spite of not being embalmed or treated in any fashion, the bodies of “the incorruptables” as they are called, have remained lifelike, flexible and often sweetly scented many years after their death. Many are now displayed under altars in glass-fronted reliquaries, to the admiration and wonder of countless people.

Human remains decompose according to natural laws, and moisture in the body along with the environment of the tomb in which the remains are placed is the primary factors that influence the decomposition of the body. Regardless of these influences, the body will begin decomposition immediately after death, and will continue to decompose in the days, weeks and months afterwards, regardless of the preservation methods (or lack thereof) that are used, although those preserved will normally decompose at a slower rate. Nevertheless decomposition cannot normally be completely inhibited, regardless of the preservation methods used.

Nevertheless, the bodies of numerous Saints have survived decomposition for decades and even centuries. Even more remarkably, there are even a couple of circumstances where the holy remains were subjected not only to normal conditions of burial, but to the appli¬cation of quicklime, and even one’s whose mutilated body was subjected to torturous conditions which in reality should have hastened the body's destruction.

There are, in fact, several hundered confirmed and documented cases of incorruption in the Catholic church. Many are canonized Saints or Blesseds, however some are simply considered holy persons. Lists of many of these can be found on the internet. What will be presented here is a very recent and well documented case of incorruption that occurred in modern times concerning the holy Catholic monk of the Maronite rite, St. Charbel Makhlouf (1828-1898). 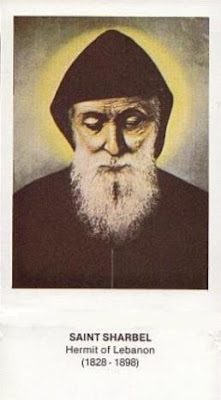 Charbel Makhlouf(sometimes spelled Sharbel) was born on May 8, 1828, in the village of Biqa-Kafra in the high mountains of Northern Lebanon. He was given the name of Joseph at his baptism, and he was the last of the five children born to very poor but religious parents. From early childhood he showed a strong attraction to prayer and solitude, and at age 23 he left home to become a monk in the Monastery of St. Maroun at Annaya. After being received into the novitiate, he was given the name Charbel, the name of an early martyr.

After the usual theological and secular studies, he was ordained a priest on July 23, 1859 and was assigned to the Monastery of St. Maroun, where he spent sixteen years with his fellow bretheren, living a communal life of prayer and devotion to God.
In 1875 he received the permission of his superiors to live alone in a private hermitage named Saints Peter and Paul, which was not far from the monastery, and which was used by the priests during days of quiet personal retreat. It was a rugged and simple cabin, with poor heat and the bare necessities of life. It was in this secluded sanctuary that he spent the remaining twenty-three years of his life in the practice of severe scarifices and mortification. It is recorded by his companions that he often wore a hair shirt, slept on the hard ground, and ate only one meal a day.

During his lifetime he was most notable for his remarkable devotion to the Holy Eucharist and his preference for saying daily Mass at 11:00 a.m., so he could spend almost all the morning in preparation for the Mass, and the rest of the day in thanksgiving afterwards.

After 23 years of daily sacrifice in such a meager existence, in 1898 he suffered a seizure while saying Mass, and a priest assisting at the Holy Sacrifice was forced to pry the Holy Eucharist from his grasp. The holy monk died eight days later on Christmas Eve at the age of seventy. He was buried very simply in the monastery cemetery where so many saintly monks before him had been buried. According to monastic custom, the body, which was not embalmed, was dressed in the full habit of the Order and was placed into the ground without a coffin.

A miraculous light appears above his tomb
Given such a hidden existence, he would most certainly have been forgotten had not a most extraordinary phenomenon occurred at his grave in the form of an extraordinary bright light, which surrounded his tomb for forty-five nights following the interment. Countless local townspeople saw the miraculous light and because of it and the enthusiasm of the many witnesses of this prodigy, the officials of the monastery requested permission from the ecclesiastical authorities to exhume the body four months after the saint's death.

On the day of the exhumation, his grave was opened in the presence of the superiors of the Order, the monks of the monastery, and many villagers, the body was miraculously found in perfect condition to the amazement of everyone, even though, as the result of frequent rains which had inundated the cemetery several times since the burial, the body was found floating on mud in a flooded grave. Given that St Charbel was buried in the ground without a casket and in very wet conditions, such circumstances certainly should have expedited decompostition.

After being cleansed and reclothed in fresh garments, the body was reverently laid in a wooden coffin and placed in a corner of the private chapel of the monastery for the admiration and contemplation of the monks and the faithful.

Additionally, a remarkable phenomenon accompanied this exhumation; from the pores of the body there exuded a liquid described as perspiration and blood, which had the distinct odor of blood. As a result of this transpiration, the blood-stained clothing upon his person was changed twice a week. Small pieces of this cloth soaked in this mysterious fluid are distributed as relics and these have been said to effect cures.

Among the men of medicine who examined the body was Dr. Elias Elonaissi who declared on November 16, 1921:
"I observed that the pores emitted a matter like sweat; a strange and inexplicable thing according to the laws of nature, for this body that has been dead for so many years. I have renewed the same examination many times, at different periods; the phenomenon has always been the same."

Another physician, Dr. George Choukrallah, examined the body a total of 24 times during 17 years and declared:
"I have always been astonished at its state of preservation and espe¬cially this reddish liquid exuded by it. .. My personal opinion based on study and experience, is that this body is preserved by a supernatural power."

The phenomenon is more astounding when one considers that in 1918, following a simple autopsy, the body was exposed on the terrace during the heat of summer for three months without the body decomposing and without drying up the source of the fluid. 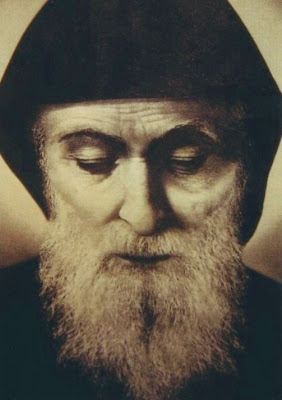 On July 24, 1927, after the body of Father Charbel was minutely examined by two physicians of the French Medical Institute at Beirut, it was clothed in sacerdotal garments and was placed in a new coffin of wood covered with zinc. Various documents drawn up by the physicians, the Judge of the Ecclesiastical Commission, the Defender of the Faith, a notary and superiors of the Order, were placed in a zinc tube, which was firmly closed and placed beside the body.

On February 25 of the Holy Year 1950, pilgrims to the shrine noticed a liquid seeping from a corner of the tomb and flowing onto the floor of the oratory. The father superior of the monastery, on exam¬ining the liquid and fearing damage to the contents of the tomb, had it opened in the presence of the assembled community. The tomb was found dry and the coffin in the same condition as when it was placed in position, except that a reddish colored liquid was seen dripping through a crack in the foot of the casket.

Permission to examine the contents of the sealed casket was ob¬tained, and in the presence of many ecclesiastical authorities, offi¬cials of the Order and attending physicians, the seal was broken on April 22, 1950. The body was once again found completely free of any trace of corruption and was perfectly flexible and lifelike. The sweat of liquid and blood continued to exude from the body, and the garments were found stained with blood, the white content of the fluid having collected on the body in an almost solidified condition. Part of the chasuble had rotted and the zinc tube containing the official documents was covered with corrosion.

And so it was for 67 years in modern times that the body of Saint Charbel remained perfectly preserved, the case itself be thoroughly documented and examined by medical professionals and described by all accounts as being supernaturally sustained during this 67 year period. For reasons known only to Himself, God chose not to continue the miracle, and at the time of the beatification in 1965, the body was found to have finally complied with the laws of nature. Today, only his bones remain, and these are of a red color, and the discharge of the fluid has ceased.

A 1st Class relic of St. Charbel is currently touring the US. Already, one miracle has been attributed to the saint's intercession. It took place in AZ when a blind, Hispanic, Roman Catholic, Woman came to St. Joseph Maronite Catholic Church in Phoenix, to venerate the relic and ask for a blessing. Physicians have confirmed that there is no scientific explanation for the restoration of the woman's sight. You can read the article here.

We are Honored to have the Most Reverend Bishop Gregory Mansour Bishop of the Eparchy of Saint Maron of Brooklyn NY and the Most Reverend Bishop Edward Scharfenberger Bishop of the Roman Catholic Diocese of Albany NY, at my parish, St. Ann Maronite Catholic Church, on (SUNDAY MAY 8th at 10:00 AM) to celebrate the Divine Liturgy and bless us with the Relics of Saint Charbel. The Knights of Columbus will form a color guard and a reception will follow mass for an opportunity to meet both bishops. The relics will carried by the bishops in a procession around the church.

If you know of anyone residing in proximity to the Capitol Region of NY, please share this information with them. It is not every day that a saint and 2 bishops come to visit.

St. Charbel, pray for us!

2 posted on 05/01/2016 4:21:48 PM PDT by NYer (Do not store up for yourselves treasures on earth, where moth and rust destroy them. Mt 6:19)
[ Post Reply | Private Reply | To 1 | View Replies]
To: NYer
Incorrupt bodies of the Saints -St Charbel Makhlouf -incorruptable (Catholic Caucus)
Saints that are Incorruptible [Ecumenical]
Being Catholic: Sacred Things, Relics and the Incorruptibles