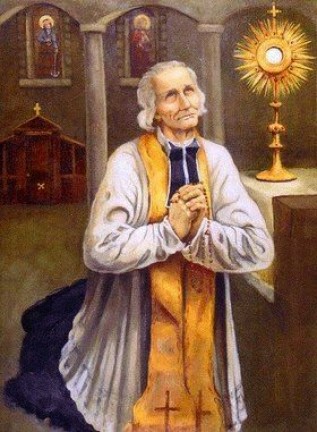 A few years ago Peter Kreeft wrote an article about the culture war in which he maintained three things. First, he wrote that our civilization is in crisis and we are at war. Second, he said that our enemies are not the liberal media, anti-Catholic bigots, or even the culture of death, but fallen angels and sin. Third, he concluded that the weapons that will win the war are saints.

In other words, if you want to fight evil in the world, be holy.

At first, this may appear to be an overly simplified solution to the many problems we face today, but if you read the lives of the saints you can clearly see the impact that radical holiness has on the world. The real problem with Dr. Kreeft’s solution is not that it is naïve or simplistic, but that it is so difficult. It is not easy to be holy. It is not easy to die to oneself each day. However, with God’s grace, it is certainly possible for each and every one of us. We know this is true because we have the examples of the holy men and women who have done it—the saints. Since it is his feast day today, and since I have been listening to stories about him for as long as I can remember (he is my dad’s favorite saint), let us take St. John Vianney as an example of how holiness transforms lives and changes the world around us.

The Cure of Ars grew up during a time of severe persecution of the Church in France. Amidst this, he was sent to a parish where the people had lost their faith, and he was routinely attacked by the Devil at night for a period of thirty years. Despite the many obstacles he faced, he transformed Ars and the surrounding area through his holiness, mortification, and selfless devotion to his priestly vocation. It is said that he heard confession for eighteen hours a day, and that people would wait for a week to have him hear their confession. He is now the patron saint of parish priests.

The devil at one point said that if there were three men like St. John Vianney in the world, his kingdom would be ruined. So, what can we take from the life of the Cure of Ars that will help us to face the world we live in today? I would like to focus on three things:

We are not alone

We are not the first Christians who find ourselves living in a world that is increasingly hostile to our faith. St. John Vianney grew up in far worse circumstances. He lived during the French Revolution, a time when Mass was outlawed, Churches were closed, and priests were either killed or imprisoned. As a child he had to attend Mass in secret, at night, in a barn. During this time, despite the dangers they faced, many people, especially in the French countryside, never gave up their faith. They continued to pray, lead good lives, and received the sacraments when they could. If we one day face persecution, we are called to do the same.

Just as St. John Vianney’s holiness changed the people of Ars and the hundreds of thousands of people who flocked to the town to have him hear their confessions, we need to be confident that our personal holiness changes things, and that it will bring about conversions (even if we are not aware of it in this lifetime). The choice is ours—no one is going to force us to be saints.

We can start today to grow in holiness and we have every means at our disposal. In addition to living out our vocation as best as we can (something that the Cure of Ars said is enough to do penance for all of our past sins), there are a number of ways we can strive for sanctity. First, we can start by praying every day and beginning to grow closer to God. Then, we can begin going to Mass and Confession more often. Next, we can determine what our primary fault is and commit to doing one thing every day to build up the opposite virtue. After that, we can make a long-term sacrifice, even something small, and give it up for the intentions of the Sacred Heart of Jesus and for the world.

Finally, we can serve the poor, the sick, and the lonely, in so many ways and make the spiritual and corporal works of mercy a daily part of our lives. However, as I mentioned before, sanctity is not an easy task. Even the holy Cure struggled with wanting to leave Ars to retire to a place where he could spend more time in prayer. He even tried to leave a few times, but the people of Ars would not let him go. Despite the challenges that we will undoubtedly face in living out our vocation, we must persevere and keep fighting.

We have absolutely nothing to fear

Did you know that the Cure of Ars routinely joked about the Devil’s nightly attacks? He could do this because he knew that the devil held no power over him. In fact, in the middle of the night, when he would hear his door being rattled and pounded on, when he felt the rectory shake as if there was an earthquake, or when the devil dragged his bed around the room or set it on fire, he would simply make the sign of the cross, resume his prayers, and ignore the Devil’s wild antics. After a particularly rough night, the Cure of Ars would predict that a “big fish” was coming, and invariably someone would experience a dramatic conversion in his confessional the following day.

G.K. Chesterton once said, “Each generation is converted by the saint who contradicts it most.” This was certainly true of the Cure of Ars—in a time in France when many people had lost their faith, he brought them back to the basics of Catholicism. St. John Vianney preached repentance, prayed constantly, taught through his example, lived his vocation selflessly and tirelessly, lived out poverty completely (he was a Franciscan tertiary and gave away everything he owned), and reconciled countless souls to God through the confessions he heard.

So the next time you are worried about the evil that you see in the world and you really want to change things, ask yourself, “how can I contradict this generation the most?” or, “how can I be more like the Cure of Ars today?” And then, get to work.

St. John Vianney, pray for us!

You beat me to it! I had it all ready to post. LOL! Thanks.