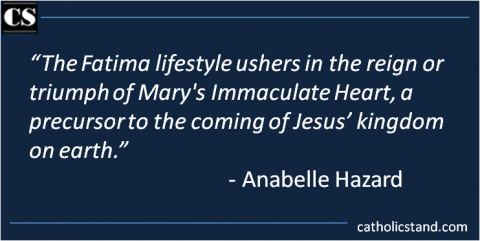 Did you hear the true story of the Nagasaki atomic bomb survivors? Fr. Hubert Schiffer, SJ and at least four other Jesuits were living in quarters eight blocks away from the epicenter of the bomb. They miraculously survived the bomb blast and Fr. Schiffer lived for at least fifty more years without a trace of radioactive side effects. Fr. Schiffer attributes the miracle in his own words as related by Fr. Paul Ruge O.F.M.I, “We believe that we survived because we lived the message of Fatima. We lived and prayed the rosary daily in that home.”

The Message of Fatima

‘Fatima’ refers to the Church approved apparitions of Mary in 1917 to three shepherd children in Portugal for a period of six months. The children were given messages concerning world events and the miracle of the sun capped the end of the public apparitions. Through St. Jacinta, St. Francisco and Bl. Lucia (the seers), the Church was introduced to the Immaculate Heart of Mary, entreated to pray the rosary daily, and encouraged devotion known as the Communion of Reparation where the faithful assist First Saturday Masses in reparation to the offenses committed against the Immaculate Heart of Mary. Mary also begged the world to stop offending the Lord and to make sacrifices so that sinners would be saved. She promised that if her requests are heeded, “a period of peace will be given the world… and in the end, my Immaculate Heart will triumph.”

The alarming Fatima prophecies centered around world wars, the Pope’s assassination and the danger of Russia’s communistic influence. Today, it is tempting to dismiss that the A-bomb of Nagasaki, the crumbling of the Berlin wall and St. Pope John Paul II’s consecration of the world closed the case for Fatima’s relevance. However, St. Pope John Paul II’s successors didn’t think so. Pope Benedict XVI on May 13, 2010 in a Mass at the Fatima shrine said:

“We would be mistaken to think that Fatima’s prophetic mission is complete.”

After him, Pope Francis, not even a year into his papacy requested Our Lady of Fatima’s statue to be brought to St. Peter’s square. On October 13th, 2013 (the feast of Our Lady of the Rosary and anniversary of the last apparition), Pope Francis consecrated the world to Mary.

The threat of China and North Korea’s communism over Asia, Russia’s re-appearance in world events, middle east instability, killing of the innocent unborn, and universal Church persecution should alert us that this period of peace is not among us yet. What we see, in fact, looks more like the cusps of a brewing storm of global mayhem. Current events make for a compelling case of why we still need to listen to and live out Mary’s message in Fatima. We put our own future at risk if we turn our backs on Fatima.

Living Out the Fatima Message

The Fatima lifestyle ushers in the reign or triumph of Mary’s Immaculate Heart, a precursor to the coming of Jesus’ kingdom on earth. St. Louis de Montfort once prophesied: “His [Jesus] kingdom will come. But this will happen only after the Blessed Virgin is known and has begun to reign…She gave him birth the first time. She will bring Him forth to us when He comes to us again.”

How do we live out the messages of Fatima?

The Fatima lifestyle is a shield of the Church for these perilous times. During the super cyclone that hit the Eastern seaboard of the Philippines, almost all the parishes the diocese of Tacloban sustained heavy damage. All except one: the parish where a First Friday Eucharistic Adoration was going on at the time of the storm. This parish had been practicing the Communion of Reparation, a devotion which begins with an evening first Friday Mass, through nine hours of Adoration and rosaries, and closes with a midnight first Saturday Mass… as inspired by Our Lady of Fatima’s requests.

More to the story than just those at Nagasaki.

“The surprising survival of the Jesuits in Hiroshima is similar to that reported in Nagasaki, where a Franciscan friary built by St. Maximilian Kolbe also went unaffected.”

Oddly enough, one possible reason has been advanced by Indian traditional healers in South America. Formerly called “witch” healers, most are now Catholic, and reject the term “witch”, preferring “traditional” healers, as they use traditional methods to heal, but without the paganism.

In any event, they are very impressed by Catholic clergy because of their chastity, which they believe can be channeled through self discipline into great spiritual strength. By their traditions, at least some Catholic clergy should have super-human abilities because they preserve the strength used for sex and making children.

“This is how they can convey the prayers of others to heaven”, for example. “That is why Catholic clergy are so hard to wipe out”, in the reign of tyrants.

It is said that, when the Roman legions destroyed Jerusalem in 70 AD, the entire city, with the exception of the Upper Room where the Last Supper took place, was torn down.

Also, no Christians were left in the city when it was destroyed — they had all fled to other parts of Judea just as Christ told them to, forty years earlier.

**How do we live out the messages of Fatima?
1.Pray the rosary daily
2.Follow Pope Francis’ example and consecrate ourselves to Mary
3.Practice the Communion of reparation for First Saturdays
4.Make penance and sacrifices for sinners**

8 posted on 05/15/2014 4:34:15 PM PDT by BBB333 (Q: Which is grammatically correct? Joe Biden IS or Joe Biden ARE an idiot?)
[ Post Reply | Private Reply | To 1 | View Replies]
To: NYer
DON’T TURN YOUR BACK ON FATIMA (Catholic Caucus)
Our Lady’s Request: Pray for the Dying! (Our Lady of Fatima [Catholic Caucus]
Original Manuscript of Fatima's 'Third Secret' Will Soon be Part of an Exhibit
Sunday Night Prime with Fr Apostoli and Beth Lynch (Russia and Fatima prophecies) {Cath Caucus]
The Consecration and Fatima, Redux
America Needs Fatima Public Square Rosary
Lourdes and Fatima: True or False?
Fatima and World Peace (Catholic / Orthodox Caucus)
Fatima, Freemasonry, Vatican II and 1960
Our Lady of Fatima and the “...... Connection”
Optional Memorial of Our Lady of Fatima
Pontificate of Pope Francis to be consecrated to Our Lady of Fatima on May 13, 2013 (Cath Caucus)
Francis' Petrine Ministry Consecrated to Our Lady of Fatima (CATHOLIC CAUCUS)
Fatima Shrine recalls Pope Francis' sponsorship of the Pilgrim Image of the Virgin of Fatima
Cardinal Bergoglio wrote to Fr. Gruner about Fatima [Catholic Caucus]
After Venezuela's election results 2 words come to mind: Fatima's Prophecy

The Cathedral of Our Lady of Fatima in the Heart of the Gulag Archipelago
Archbishop Loris Capovilla has "reservations" about Fatima and Marian devotion in general
Not 2012 But 2017!
On Fatima anniversary, Fr. Apostoli sees atheism overtaking the West (Catholic Caucus)
Fatima, A Grace for Mankind [Catholic/Orthodox Caucus]
High resolution pictures of the miracle of the sun
Pope Benedict XVI and the 'Third Secret' of Fatima (surprisingly fair article)
Bishops must rediscover their role as fathers, declares Benedict XVI from Fatima
Half a million attend the Pope's Fatima mass
[CATHOLIC CAUCUS] Half a million pilgrims join the pope for a Mass in Fatima [VIDEO]
Pope: We Would be Mistaken to Think That Fatima’s Prophetic Mission is Complete
Pope Benedict XVI's Homily on the Feast of Our Lady of Fatima
Holy Father's Address at Fatima Shrine
A Marian Offense for Benedict XVI
Vatican cardinal: There is no fourth secret of Fatima
Discourse No. 4.1 Pope Entrusts and Consecrates Priests to Our Lady of Fatima
Pope Benedict XVI in Portugal – Discourse No. 4 Homily Vespers with Clergy and Religious
Benedict brings 'Marian Cool' to fevered Fatima devotion
Daily Marian Prayer And Image [DEVOTIONAL]
Papal Visit to Portugal: Text of the Secret of Fátima with Commentary

I’ve never heard of “communion of reparation for first Saturdays”. What is that?