NORWICH, England (BP) -- He is difficult to find and even then is barely visible, but he's there. Green Man, a symbol of ancient pagan religion, stares down from the nave of Norwich Cathedral. In a way, his presence is symbolic of how it has always been, and still is, in this medieval city.

Norwich has the unique distinction of being officially classified as England's most ungodly city. That's not unusual considering it's the only English city to ever be excommunicated by a Roman Catholic pope.

The excommunication came in 1274. Its "ungodly" status comes from the 2011 census.

The 2011 survey has Norwich leading the way in a national shift away from Christianity, with 42.5 percent in the city saying they have no religion, against a national rate of 25.1 percent.

When residents hear they live in the most ungodly city in England, however, they aren't surprised. They are surrounded by evidence of it every day. A myriad of shops offer spiritual, New Age and pagan paraphernalia -- crystals, tarot cards, etc.

And the city that once boasted an active church built for every Sunday of the year during medieval times now has a pub for every day of the year. The pubs continue to burst with their usual patrons, but many of the churches are now art galleries, meeting halls and bookshops.

Norwich pastor Marvin Lucas is familiar with the rich heritage of one church -- St. Andrews. His initial experience with the church was very different from its Christian roots, however. The church's origins go back to 1270, but Lucas has always known it as a community center.

"It was at St. Andrews Hall where I would party," Lucas said. "In my adolescence I remember collapsing in a drunken stupor during a party in this building. It is ironic how this place of radical religious fervor is now a place of sin and debauchery."

Growing up in England with no exposure to biblical truth or the difference Jesus can make in one's life, Lucas was an outspoken opponent to anything religious. At 25, however, he made a commitment to Christ and was baptized.

Now a minister of Norwich Christian Church, Lucas serves as pastor of two house churches in the area and runs a counseling center in the city.

Kirsty Bolton, a member of one of Lucas' house churches, sees Norwich's traditional churches as empty, cold stone buildings. Most others in the city see them this way too, she believes.

"I know very few people who actually go to church at all, very few," Bolton said. "Those who do go to church are seen as slightly odd by other people, because the majority just don't go. So the census result doesn't surprise me."

When one scratches the surface of "no religion" across the British Isles, it is not unusual to find a resurgence of paganism, some secret and some blatant. One of the best-known symbols of ancient paganism, Stonehenge, majestically sits in the English countryside. It is still the site of pagan rituals.

Not far from Stonehenge is Glastonbury, internationally known as a center of paganism, witchcraft and spirituality. Regular and heavily attended pagan ceremonies in Glastonbury offer homage, sacrifices and prayers to pagan gods and goddesses, as well as to nature and its elements.

"Love pulses" and "cosmic prayers" are part of the vocabulary in Glastonbury. Flowing capes and flowers in the hair are part of the attire. Some participants are even dressed as Green Man, an image that first appeared in England in the 12th century but has a history elsewhere that dates back to first-century Rome. His likeness, symbolizing man's connection to earth and nature, continues to appear on walls and in gardens throughout the United Kingdom.

In Norwich, Green Man not only hides in the shadows of the Church of England's cathedral but also is displayed in shop windows and jewelry shops and as pieces of art, such as paintings and sculpture.

"Norwich is kind of a microcosm of England," Lucas said. "As far as Christian history is concerned, England used to be more pagan. It's kind of come full circle, I believe; back to paganism."

The people of Norwich specifically, and across the country in general, are living on the "spiritual fumes" of Christian history, Lucas believes. When that dissipates, there will be a return to pagan society, he said. Many youth are turning to paganism, including participation in festivals and rituals that "awaken" elements of air, earth, water and fire.

As in Glastonbury, pagan "moots" are openly promoted and advertised in Norwich. A moot is a locally organized event where pagans of various paths come together to socialize, discuss relevant topics, celebrate, worship and practice rituals.

"This movement caters to the mystic and environmental awareness of this postmodern generation," he said. "It is sad to see such a spiritual void in England that is regressing back to hedonistic practices. The future of Christianity looks bleak in Britain, but sometimes in the deepest darkness, light shines the brightest."

Mark Tall, pastor of Norwich Central Baptist Church, is not worried about the downward trend. He sees it as opportunity.

"Even though there is a decrease in the number of people who identify themselves as Christians, it is still 51 percent," Tall said. "We don't share our faith because we don't think people are open to what we believe and we will simply experience rejection. The census tells us that there may well be more people interested than we think, even in Norwich. The good news is that the opportunity is there."

The religious trend in Norwich is only a small part of a worldwide phenomenon. A recent report on global religious identity shows that those with no religious affiliation are now the third largest "religious" group in the world. Christians and Muslims make up the two largest groups.

The study, released by the Pew Forum on Religion & Public Life, indicates that 1.1 billion people in the world, or 16 percent of the world's population, say they have no religion or belief in God. This figure does not include those who indicated belonging to a cultic, pagan or spiritualistic religion. These adherents number in the tens of millions.

London, located halfway between Norwich and Glastonbury, hosts a thriving atheist "church." Only a year old and with a membership of 300, its services are called Sunday Assembly, and some refer to it as a gathering for non-believers. Many of those who attend wouldn't even call themselves atheists.

The group meets in a "deconsecrated" church building and sings along to Stevie Wonder and Queen, listens to readings from Alice in Wonderland and watches PowerPoints on subjects such as antimatter theory. One member refers to the church as a "congregation of unreligious people."

A true and sincere love for the lost is what it will take to reach this community, Lucas said.

"From my research and several years of preaching and teaching in England, I have developed a missional strategy," he said. "When we have to go to a class to love the lost, we have lost. Our outreach should be an overflow of one's own salvation and God's grace."

The news media may use statistics to paint a dreary picture for Christians, Tall said, "but there are those who are coming to life-changing faith in the God who lives among us today. Clearly there is no room for complacency, but neither should we sink into despair. Rather we should work together to make Jesus known, as well as live a life of faith among those who may have none."

UK is ripe for Islam.

That does it...I’m going home to behead my neighbor’s goat, with Ozzy Osbourne blaring in the background. /s

Every society will attempt to fill a spiritual vacuum, either with Godliness or paganism.

England has chosen, and it’s not Godliness.

Islamic republic before 2050, mark my words.

So is the US, and the US is ripe for paganism as well. Couldn't fight off a paper tiger. 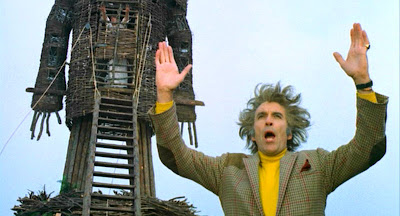 Sentry: Do you want the padre?
Harry Morant: No, thank you. I’m a pagan.
Sentry: And you?
Peter Handcock: What’s a pagan?
Harry Morant: Well... it’s somebody who doesn’t believe there’s a divine being dispensing justice to mankind.
Peter Handcock: I’m a pagan, too.
Harry Morant: There is an epitaph I’d like: Matthew 10:36. Well, Peter... this is what comes of ‘empire building.’
Major Thomas: Matthew 10:36?
Minister: “And a man’s foes shall be they of his own household.”

Edward Woodward was a raving cutie-pie back then.

Paganism is everywhere...Christian churches too with its own rituals, traditions- christmas/easter/even Sabbaths just to name a couple ... God of this world is counterfeiting....

Jeremiah 16:19. the Gentiles shall come unto thee from the ends of the world, and shall say, Surely our fathers have inherited lies and vanity, wherein there was no profit....

Great missionary fields for the Christians of the global south.

The amount of paganism (wiccan, islamic, or otherwise) is far less a problem than the degree of paganism parading as, residing within, the church (in Uk and USA both. ). The cAmel is already inside the tent.

time for the African Christian churches planted by Wesley to send missionaries to re-Christianize the British.

Neo-Pagans are deluded but not necessarily dangerous. Their reemergence is a symptom of the dry rot in the C of E and dry rot can be fixed. Images of the Green Man in 13th century churches are a less pressing problem than the crescent spires popping up all over England.

You’ll notice that every European country that had a state religion has a failing state religion, and people looking for other alternatives.

This is the real “separation of church and state” they never figured out. A state church is just giving people two masters, and the master with a legion of annoying bureaucrats will generally win that dispute.

Tax-chick, if you’re an Edward Woodward fan, you will like this: http://www.youtube.com/watch?v=NkzKrNNI-oA

Thank you, FRiend, that was absolutely charming! What a beautiful tenor, such perfect phrasing and diction.