Finding St. Francis (we don't hear much about the saint who submitted to Church authority)
Catholic Exchange ^ | March 21, 2013 | STEPHEN BEALE

St. Francis of Assisi today is often thought of in revolutionary, avant-garde images: the merchant’s son who stripped naked in public to renounce his worldly possessions and attachments, the mystic who preached to the birds, the friar who embraced lepers, and the erstwhile evangelist who crossed enemy lines during a crusade to preach to a sultan.

St. Francis indeed was all these things.

But as for the St. Francis who lamented abuses of the liturgy, submitted to Church authority, displayed the utmost respect for the clergy, and also debated the meaning of the gospels with the same sultan—we don’t hear too much about that St. Francis, especially in the news coverage of the new Pope who has taken his name.

But St. Francis cannot be understood apart from the Church any more than Pope Francis can.

Inspiration from authority: The modern mindset considers freedom and authority to be at odds with each other. Freedom is associated with the spirit of the individual that always strives to break free from the mold, while authority is assumed to be the blind force that suppresses that urge. But St. Francis drew inspiration from the Church, in particular the great Fourth Lateran Council, which he attended. Pope Innocent III opened the council by quoting Ezekiel 9, a vision in which a linen-clad man wandered through Jerusalem, marking a Tau on the foreheads of those who mourned the sinful abominations of their city. This speech so moved St. Francis that he adopted the Tau—a T-shaped Greek letter that recalls the Cross—as an enduring emblem of his order, according to Church historian Warren Carroll.

The council would go on to become the first one to discuss the doctrine of transubstantiation. It also addressed the proper celebration of Mass. These teachings of the council were zealously embraced by St. Francis, according to Fr. Tom Washburn, writing in a 2002 issue of The Cord, a Franciscan quarterly publication:

[O]ften overshadowed by the great Trinitarian statements of the Fourth Lateran Council, are the canons that dealt with liturgical practice and sought to restore a dignity to liturgical celebration. The writings of Francis show that he was devoted to the promotion of these canons perhaps even more than the others.

In his Second Letter to the Custodians, for instance, St. Francis “makes it clear that not only is he concerned with spreading the word about council concerns, but he wants the rest of the Order to do the same,” Fr. Washburn adds. In particular, in his letters, St. Francis repeatedly calls for “greater reverence” of Jesus in the Eucharist. (More on this below.)

Submission to authority: St. Francis didn’t listen to Church authority only when it suited his purposes. When the saint was tasked with drawing up a new rule for the burgeoning order he established, Vatican authorities rejected his insistence on absolute poverty because it was deemed impractical. This was certainly no trivial matter for St. Francis, but the saint ultimately relented. “It was an extraordinarily difficult moment,” writes Carroll. “It took a great saint to accept the fullness of Church authority on matters so close to his heart; but St. Francis … never rebelled.”

Unconditional dedication to the Church: St. Francis was so committed to the Church that he vowed to remain within it, even should he face persecution from its clergy. In one of his last testaments he wrote the following:

The Lord gave me, and gives me now, towards priests who live according to the law of the Holy Roman Church, so great a confidence, by reason of their priesthood, that even if they sought to persecute me, I would nonetheless return to them. And if I were to have as great a wisdom as Solomon possessed, and were to meet with poor priests of this world, I do not wish to preach without their consent in the parishes in which they dwell. And these and all others I desire to reverence, love and honor as my lords. And I do not wish to discover if they are sinners, because I behold in them the Song of God, and they are my lords.

Reverence for the Eucharist and Liturgy: There seems to be a creeping tendency among some today to pit the virtue of humility against the beauty of the liturgy. But it wasn’t so with St. Francis, who urged deep reverence for the Eucharist and the greatest care for the sacramentals used to celebrate it. In his Letter to the Clergy St. Francis lamented liturgical abuse and neglect in his day:

But let all who administer such holy mysteries—especially those who administer them carelessly—consider the sad state of the chalices, the corporals, and the altar-linens upon which the Body and Blood of our Lord are sacrificed. And [the Eucharist] is left by many in dirty places, carried about in a miserable manner, received unworthily, and administered to others without discretion. Even His sacred written words are sometimes left to be trampled underfoot. …

It was an exhortation St. Francis repeated. In the First Letter to the Custodians, St. Francis insisted that the chalices, appointments of the altar, and everything else which “pertains to the sacrifice” must be of “precious metal.” Likewise, he wrote that the Eucharist should be put in a “precious location” and likewise warned against keeping the Scriptures in “an improper place.”

Rules on Liturgical Music: St. Francis’ concerns about liturgical reverence extended to the singing of the Divine Office. In his Letter to the Entire Order, St. Francis enjoined clerics in his order to not dwell on “melody of voice.” Liturgical singing, he added, should focus on harmonizing one’s mind with God, not “coax[ing] the ears of the people by voluptuousness of voice.”

Defense of the Crusades: The meeting of St. Francis and the sultan ranks among the most famous stories from his life. St. Francis arrived at the crusader camp a “small, raggedly clothed man with bushy eyebrows” who struck some of the soldiers as “mad,” according to historian Warren Carroll. His plan to try to convert the sultan alarmed a cardinal attached to the army, who “did all he could do to discourage him from it, and then washed his hands of all responsibility for it,” Carroll writes in his book, The Glory of Christendom.

St. Francis may have been breaking crusader protocol, but it would be a mistake to assume he didn’t believe in the merit of the crusades. According to one account of his conversation with the Muslim ruler, the sultan alluded to Matthew 5, where Jesus says to turn the other cheek. “All the more Christians should not invade our land!” the sultan reportedly concluded. St. Francis responded:

It seems to me that you have not read the gospel of our Lord Jesus Christ in its entirety. In fact it says elsewhere: “If your eye causes you sin, tear it out and throw it away.” … With this, Jesus wanted to teach us that if any person, even a friend or a relative of ours, and even if he is dear to us as the apple of our eye, we should be willing to repulse him, to weed him out if he sought to take us away from the faith and love of our God. This is precisely why Christians are acting according to justice when they invade the lands you inhabit and fight against you, for you blaspheme the name of Christ and strive to turn away from his worship as many people as you can.

Mortal sin: Caring for the poor, the sick, and others who are downtrodden is rarely associated in the secular mindset with sharp rebukes against sinners. But St. Francis didn’t mince words when it came to sin and its eternal consequences in the second version of his Letter to the Faithful:

But let everyone know that whenever or however a person dies in mortal sin without making amends when he could have done so and did not, the devil snatches up his soul out of his body with so much anguish and tribulation that no one can know it unless he has experienced it.

TOPICS: Catholic; History
KEYWORDS: catholic; popefrancis; saintfrancis; stephenbeale
Stephen Beale is a freelance writer based in Providence, Rhode Island. Raised as an evangelical Protestant, he is a convert to Catholicism. He is a former news editor at GoLocalProv.com and was a correspondent for the New Hampshire Union Leader, where he covered the 2008 presidential primary. He has appeared on Fox News, C-SPAN and the Today Show and his writing has been published in the Washington Times, Providence Journal, the National Catholic Register and on MSNBC.com and ABCNews.com. A native of Topsfield, Massachusetts, he graduated from Brown University in 2004 with a degree in classics and history. His areas of interest include Eastern Christianity, Marian and Eucharistic theology, medieval history, and the saints. He welcomes tips, suggestions, and any other feedback at bealenews at gmail dot com.
1 posted on 03/22/2013 3:48:56 PM PDT by NYer
[ Post Reply | Private Reply | View Replies]
To: netmilsmom; thefrankbaum; Tax-chick; GregB; saradippity; Berlin_Freeper; Litany; SumProVita; ... 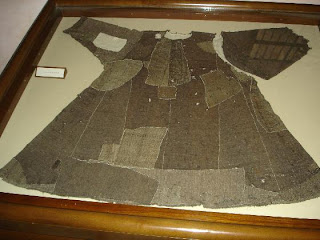 The Robe of St. Francis

St. Francis was so committed to the Church that he vowed to remain within it, even should he face persecution from its clergy.

Very cool. I fondly remember reading about various Saints while on retreat. Saint Francis was one.