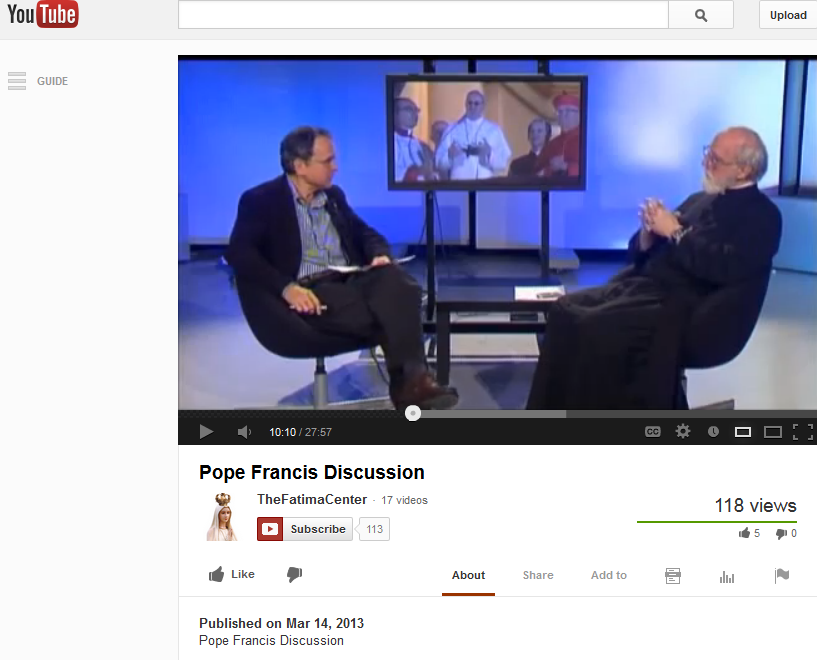 Have to admit I did not receive even a single communication from Cardinal Bergolio, but am in receipt of numerous mailings from Fr. Gruner (from his organization, anyway — and I do find them enlightening).

I feel shortchanged. I haven’t heard from either Cardinal Bergoglio or Fr. Gruner.

I don’t follow Fr. Gruner very closely but I thought his viewpoint may bring some peace to those concerned by the line of thinking that is continuing to be expressed at RorateCaeli.

I don't know what to think, too many conflicting signals.

As long as we continue to have our twice or thwice monthly EF Mass in town and the FSSP Masses 180 miles away, probably won't affect us very much either way.

I can’t even read Rorate after yesterday. As a TLM attendee I hope that Francis is too holy to stomp on anyone else’s spiritual journey and peace. If he does not celebrate TLM, fine, but do not cause others to discourage it.

“The very first thing Archbishop Bergoglio did after the publishing of Summorum Pontificum of Pope Benedict XVI was to promote the Traditional Latin Mass, the Extraordinary Form, in his Archdiocese, immediately directing that a chapel, to start with, be set up for this end.”

Didn’t he limit the EF to one parish and one priest?

Gruner is a bit far out, and the Blue Army (a catholic organization that stresses prayer) has warned against him. He acts as if the Popes had only said a magic word everything would have been hunky dorey. And of course he was recently on Coast to Coast AM, putting him in a category with other conspiracy theorists...