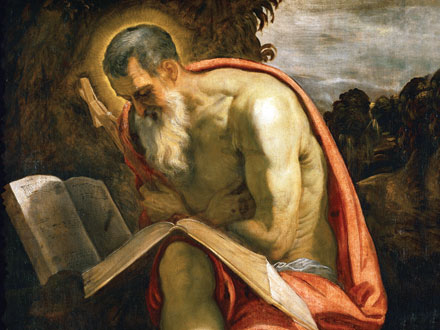 Tintoretto’s painting of the ascetic and acerbic St Jerome

Jerome (c 347-420), the greatest scholar among the Church Fathers, made the Latin translation of the Bible which became known as the Vulgate.

He was, however, a contentious individual, with a penchant for sarcasm which readily created enemies. “If he will only conceal his nose and hold his tongue,” he wrote of one opponent, “he might yet be taken as handsome and learned.”

Jerome was born at Stridon, near Ljubljana in modern Slovenia. He was not baptised until he went to study in Rome as a teenager.

His early propensity for idleness and amusement caused him pangs of guilt, which he would attempt to relieve by visiting the catacombs. In the Stygian gloom he found the words of the Psalmist fulfilled: “Let them go down to hell.”

Terror added force to his Christianity. He left Rome and established himself in Trier, where he applied himself to theology and decided to become a monk. By the time he took his vows, however, he had moved to Aquileia, near Venice.

A dispute decided him to move on again, until in 374 he reached Antioch in Syria. Here he fell ill, and dreamed that on the Day of Judgment he would be condemned as a follower of Cicero rather than of Jesus Christ. On recovering, therefore, Jerome lived for five years in the desert of Chalcis, learning Hebrew. He was already a scholar in Greek.

Back in Antioch he was ordained a priest, though he never said Mass. Soon he moved on again, this time to Constantinople, where he studied under Gregory of Nazianzus.

By 382 Jerome was back in Rome. He became secretary to the aged Pope Damasus I, who commissioned him to revise the existing Latin translations of the gospels.

Jerome also persuaded women from smart, rich families to adopt a more religious and ascetic life. Indeed, he was accused of having killed a girl called Blaesilla by the fierce austerities which he inflicted. His enemies adopted the slander that there was more to his relations with the rich widow Paula than met the eye.

In 385 Jerome left Rome and returned to Antioch in the company of Paula, who financed the rest of his career. Together they visited the Holy Land and Egypt. Then, from 388 until his death 32 years later, he lived in a hermit’s cave near Bethlehem.

During that time Jerome used his knowledge of Hebrew to complete the Latin translation of the Bible. He also provided extensive commentary and exegesis, while his lives of Paul of Thebes, Hilarion and Malchus afforded models for the monastic life. His letters are unsurpassed in ancient literature.

Jerome’s contentious ways never left him and he was particularly severe on the Pelagian heresy. He also indulged in bitter controversy with his former friend Rufinus.

Pelagianism received its name from Pelagius and designates a heresy of the fifth century, which denied original sin as well as Christian grace. Read More .

The exact location of Stridon in Dalmatia is uncertain. It could be in modern Slovenia or in modern Croatia. It might even have been in Bosnia (although I don’t know if any possible places in Bosnia have been seriously advocated).

A point in his favor!!

Mr. Mercat and I went to watch Max McLean perform Screwtape yesterday. It was wonderful. I downloaded the book to kindle and am rereading it now.

Heck of a guy.

But it’s not like living in a cave was that much worse than living in a house in those days. *shudder*

Wow, even the most cankerious can become SAINTS. :)

I kind of liked Pelagius.

The old line is “Dear G-d, don’t make me a saint. Some of them are hard to live with.”

No relation to Jerome K. Jerome (whose views, if any, on Pelagianism, I know nothing about). St Jerome in the Desert

Translation for the 21st century: Lord, help me out to deal with some of the saints, I am at the breaking point.