The camp officers and groups of the camp guards would go afoot or ride through it in droves, like occupying forces; the camp administration would be the city's main institution; the telephone network would not belong to the city, but to the camps; the bus routes would all lead from the city's center to the camps; and all the town inhabitants would earn their living off the camps.

The largest of such provincial capitals of the [Gulag] Archipelago was Karaganda. It was created by and filled with exiles and former prisoners to such a degree that a veteran zek [inmate] could not walk the street without running into old acquaintances. The city had several camp administrations. And individual camps were scattered all around it like the sands of the sea.

In the heart of the ancient Russian Empire and the Soviet Union, in Karaganda (northern Kazakhstan), a work of art in the shape of a Cathedral dedicated to Our Lady of Fatima will be consecrated next Sunday, September 9, 2012. The new Cathedral of Karaganda is in great measure the work of an indefatigable friend of Tradition, Bp. Athanasius Schneider, auxiliary of Astana, who did the best he could to build a temple worthy of the tradition of the Church, of Our Lady of Fatima, and as a memorial of the victims of Communism. 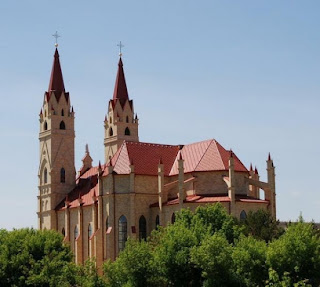 The Bollettino published the designation of the Papal Legate and mission that will be present at the consecration, and Zenit has an interview (in Italian) with Bp. Schneider. Some excerpts below:

What is the historical and spiritual meaning of the construction of this Cathedral at Karaganda?

Bp. Schneider: The first reason was this: to have a cathedral in a more dignified and visible place. Because.........

thank you for posting this!
...it is inspiring, that Catholics,
sent to Kazakhstan from Ukraine and Poland,
with virtually nothing...
kept their faith..
and built such a strong community.
...truly, amazing!!!

and the Russians use “Karaganda”, as we use “Timbuktu”...
http://en.wikipedia.org/wiki/Karaganda
-
“Karaganda is an industrial city, built to exploit nearby coal mines using the slave work of prisoners of labour camps.”
“
Karaganda was often used as the punchline in a popular joke in the former Soviet Union. Karaganda is fairly isolated in a vast area of uninhabited steppe, and is thought by many to be “the middle of nowhere”.
... (”Where is it?” — “In Karaganda!”)
“
///
again, an inspiring story of Faith.
(and, as in Poland (where many originated),
“Our Lady of Czestochowa” is honored as being the “Queen of Poland”,
and given special reverence for centuries,
the people of Karaganda have a special dedication to Mary.
and i believe most of their Priests are Marian.)

And Cardinal Mahony of Los Angeles built a $190m Cathedral that looks likes a large warehouse.

Thank you for posting this article. When I read it I thought of the words of Jesus... Upon this rock I will build my Church and the gates of hell will not prevail against it.

That area of Russia has been hell for so many people, this beautiful sanctuary serves as a reminder that Christ is victorious over all.

Wow, look at the pics: http://www.diocesiportosantarufina.it/home/news_det.php?neid=2137