O glorious Agnes, chosen by God, though weak,
to make His own might manifest in your martyrdom,
together with the Apostles
intercede before the throne of our Our Father in heaven
and beg strength for the bishops of the Church in the United States
so that they will in a timely manner,
and with no uncertain words and actions,
stand up for religious freedom in the face of attacks by the Obama Administration.

I have posted this in times past, but it bears repetition:

Here is something I have posted in the past… about St. Agnes of Rome. Newcomers to WDTPRS may not have seen it.

Behold the skull of Agnes, in situ. The dies natalis (“birthday into heaven”) of Agnes was recorded in the register of the depositio martyrum as 21 January.

The little girl was buried by her parents in praediolo suo, on their property along the Via Nomentana where there was already a cemetery.

This cemetery expanded rapidly after that, because many wanted to be buried near the grave of the famous martyr. The ancient cemetery grew in stages between the Basilica which Constantina, daughter of Constantine and Fausta began over her tomb from 337-350 and the small round Basilica of Constantia (Constantine’s daughter).

There was an acrostic inscription from that time in verses about the dedication of the temple to Agnes:

You get the idea.

The Basilica of St. Agnes was reconstructed towards the end of the 5th c. by Pope Symmachus (+514). Honorius I (+638) rebuilt it as a basilica with three naves, adding a wonderful fresco of Agnes. It was worked on again in the 16th c. by St. Pius V and in the 19t Excavations in 1901 uncovered the silver sarcophagus made by Pius V for St. Agnes together with St. Emerentiana.

It contained the headless body of a young girl.

Zadock gave us a photo of the miraclous protection of Bl. Pius IX when once at the Basilica there was a near disastrous cave-in/collapse and no one was injured.

While Agnes’s body is in her tomb on the Via Nomentana, her skull is now at the place of her supposed martyrdom at the Piazza Navona in Rome’s heart. It is a fitting place to venerate a saint so much in the heart of the Roman people even today. It is not unusual for people to name their children Agnes in honor of this great virgin martyr, whose name is pronounced in the Roman Canon.

The skull was bequeathed to that church at the Piazza by Pope Leo XIII who took it from the treasury of the Sancta Sanctorum.

The Piazza itself was in ancient times the Stadium of Domitian (+96) a place of terror and blood for early Christians, far more than the Colloseum ever was. The Piazza is thus called also the “Circo Agonale” and the name of the saint’s church Sant’Agnese in Agone. “Navona” is a corruption of “Agonale”, from Greek agon referring to the athletic contests of the ancient world. St. Paul used the athlete’s struggle as an image of the Christian life of suffering, perseverance, and final victory even through the shedding of blood. Early Christian tombs often have wavy lines carved im the front, representing an iron instrument called a strigil, used by athletes to scrape dirt and oil from the bodies after contests. Victory palm branches are still used in the iconography of saints, as well as wreathes of laurels.

Ambrose has a wonderful hymn about Agnes (no. 8), used now in the Roman Church for Lauds and Vespers of her feast. The Ambrosian account differs somewhat from others. For Ambrose, Agnes died from beheading. Prudentius has her first exposed to shame in a brothel and then beheaded.

Here is the text of the hymn from the Liturgia horarum for the “Office of Readings” with a brutally literal translation.

Shining with the fire of divine love
Agnes overcame the gender of her body,
and the undefiled enclosures of the flesh
prevailed over flesh.

The heavenly host took up her brilliant white spirit,
and the heavens lifted it above the stars;
the chaste bride is united to the
blessed bride chambers of the Spouse.

O virgin, now have pity on our lot,
and, whoever celebrates your victory day,
let him earnestly pray for forgiveness of guilt
and salvation for himself.

Give back to this praying people
the Prince of heaven and Lord of the earth,
that he, merciful, may grant us peace
and times of tranquil living.

Let us celebrate with praises the gentle Lamb,
whom chaste Agnes binds to herself as Spouse,
he who governs the stars of heaven
and guides all things. Amen.

We can note a couple things from this prayer. First, the reference to fire probably a description of Agnes’s death related in a metrical panegyric of Pope Damasus about how Agnes endured martyrdom by fire. On the other hand, St. Ambrose, when speaking of her death, speaks of martyrdom by the sword.

Pope St. Damasus composed a panegyric, an elogia, inscribed in gorgeous letters on marble (designed and executed by Dionysius Philocalus) in honor of Roman saints, including Agnes. This was the period when the Roman shifted from Greek to Latin. Damasus was also trying to make a social statement with these great inscriptions, set up at various places about the City. The panegyic of St. Agnes was placed in the cemetery near the saint’s tomb, but through the ages it was lost. Amazingly, it was at last rediscovered in 1728 inside the basilica, whole and complete: it had been used upside down, fortunately as a paving stone!

Now it is affixed to the wall in the corridor descending to the narthex. Its discovery was a find of vast importance (thanks to Zadok for the photo of the inscription).

It is told that one day the holy parents recounted that Agnes, when the trumpet had sounded its sad tunes, suddenly left the lap of her nurse while still a little girl and willingly trod upon the rage and the threats of the cruel tyrant. Though he desired to burn the noble body in the flames, with her little forces she overcame immense fear and, gave her loosened hair to cover her naked limbs, lest mortal eye might see the temple of the Lord. O one worthy of my veneration, holy glory of modesty, I pray you, O illustrious martyr, deign to give ear to the prayers of Damasus.

Damasus used the sources available. There were the stories told by her parents, the 4th edict of Diocletian against Christians in 304 (lugubres cantus tuba concrepuisset). Agnes did what she did of her own free will (sponte). Note the reference to the body as temple of God (1 Cor 3:16 and 2 Cor 6:16).

St. Agnes of Rome, has two grand churches in Rome. She has two feast days in the traditional Roman calendar. Since the reform of the calendar, Agnes now has only one day, alas. 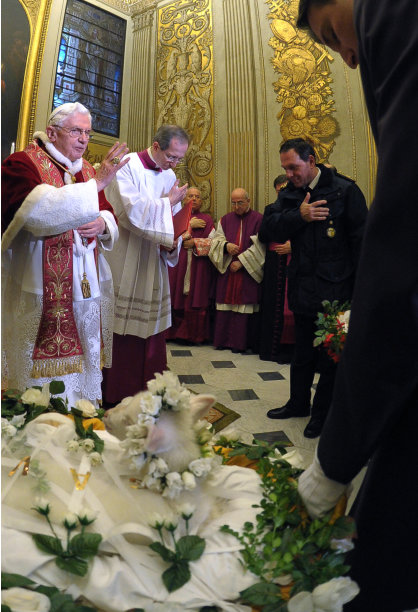 In this photo provided by the Vatican paper L'Osservatore Romano, Pope Benedict XVI blesses two lambs, at the Vatican, Saturday, Jan. 21, 2012. The pontiff blessed two lambs whose wool will be shorn later this year to make a shawl for newly appointed archbishops to wear. The blessing took place on the feast day of St. Agnes, a martyr of early Christianity who is often symbolized by a lamb. In the ritual, the pope blessed the animals, who were laying down in two baskets, each wearing a crown of flowers on its head. New archbishops receive the wool pallium, a band of white wool decorated with black crosses that is a sign of pastoral authority and a symbol of the archbishops' bond with the pope. (AP Photo/L'Osservatore Romano) 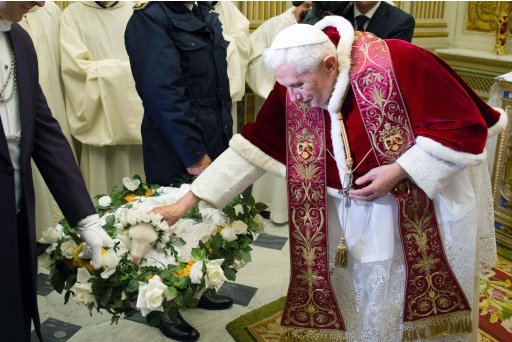 In this photo provided by the Vatican paper L'Osservatore Romano, Pope Benedict XVI pats a lamb at the Vatican, Saturday, Jan. 21, 2012.

Reminder, that wool will form the palliums of two US Cardinals.