In the Early and Medieval Church future saints seemed to often cross paths. However in our day and age this is a rarity. On a sunny Detroit afternoon in the summer of 1935 two potential saints did just that. If they lived today they would stand out like sore thumbs, two men belittled by some of their superiors who took no umbrage and continued on with their duties. In today’s world someone who chose the same path would be looked at as if they had written kick me on their backsides. After all this is the age, when our popular culture demands that any slight be met with a meltdown or protest, the louder the better. However, (Venerable) Father Solanus Casey OFM and (Blessed) Brother Andre Bessette CSC were holy men. Brother Andre will be made a saint October 17 (or is already a saint depending upon what day you read this.) Perhaps in his humble way Father Solanus Casey will be gently nipping at his heels.

Alfred Bessette (he would take the name Andre when he was ordained) was born in 1845 to a large Quebec family. Sadly for young Alfred, he would lose both parents by age 11 and would spend the rest of his childhood raised by an older sister. Twenty five years later, and several hundred miles west, Barney Casey (he took the name Solanus when he was ordained) was also born to a large family, in rural Wisconsin. He was the eldest of 16 children. His childhood was filled with hard family farm work, while at the same time that work was done under the umbrella of a faith filled home, where the Church was the glue that held the family together through tough times.

Both the young Casey and Bessette toiled at many jobs, ranging from farm labor to lumberjacks. While many were not surprised at their eventual vocation, both men carefully discerned their calling and concluded they were called to Holy Orders. Their lives wouldn’t be any easier once they were seminarians, or even after they were ordained. Ironically both men for many years worked as door men and porters, helping those who were visitors at their respective religious orders’ seminaries and monasteries.

As time went on, many began to come back just to speak with both Father Casey and Brother Andre. They and those who had heard second hand of miraculous healings wanted to know more, or perhaps ask for prayers concerning their own maladies. Even as both men’s reputations grew their station did not. For his entire priesthood, Father Casey would be a simplex priest (that is a priest who celebrates Mass but does give the homily or hear confessions.)

Both men worked long days as many came to see them at all hours with tales of woe. Eventually the Holy Cross Fathers in Montreal built a chapel for Brother Andre on one of Montreal’s highest locations. They had hoped the thousands who came would be deterred by the rugged climb. They were not and many more thousands came each and every year. Both Brother Andre and Father Casey never protested the long hours or the treatment they received from some of their superiors. They continued to heal and obey; a lesson that seems lost on today’s modern world.

We all know of spoiled professional athletes, actors, actresses, musicians etc. Many of us on sites like this rightfully comment about the ridiculous antics of Church dissidents and those who encourage them. However, is our behavior as exemplary as it should be? Sometimes it is easy for us to point the finger at the elites and say I am glad I am not like them. Jesus reprimanded a man who thought the same way.

Perhaps we should look at ourselves. How many of us have ranted and raved if we didn’t get the corner office when we felt we had earned it? How many of us complain when friends have slighted us (real or imagined?) Is it any wonder that our western society is in such need of counselors, therapists and psychiatrists? By all accounts in most major cities, they can never have enough of them.

If ever two people had the right to complain about their treatment it was certainly Father Solanus Casey and Brother Andre. They literally put their religious orders on the map (at least in North America) with attention, interest and vocations. Yet, how were they repaid? Sadly, with long hours and the knowledge that some of their superiors didn’t think enough of them to give them a higher station, and in Father Casey’s case, not being allowed to give a homily or hear confessions.

I am probably not alone in thinking that surely Father Casey couldn’t have been any worse than some homilists or confessors I have heard. In addition, Brother Andre and Father Casey’s assignments were that of a novice or a priest who needed disciplined, not someone who literally worked miracles. (If this last paragraph intrigues you may want to read my book, The Tide Is Turning Toward Catholicism. You may also enjoy the following articles; If You Want The Political Left To Run Governments, Look At What The Religious Left Had Done To Religion (Left It In Tatters.) along with The Coming Open Rebellion Against God, as well as (The Jesus the Professional Left Chose To Ignore.)

In our modern world of overhyped events with video coverage of seemingly every event, the newsworthy and the forgettable, there was no film footage or even still photo shots of the two future saints meeting on that sunny, 1935 summer day in Detroit. We can only visualize the brief meeting at the Saint Bonaventure Monastery, which was probably done with such little fanfare, that passersby would have failed to grasp the significance of the event.

Their brief meeting over both returned to his work, though for Brother Andre his work would continue for less than two years. He died in Montreal in January of 1937. Father Casey would continue his work for some 20 years. Both men had funerals that would today be called epic. Not only were they remembered by the thousands who attributed the healing to their prayer, but the many thousands and in Brother Andre’s case the nearly one million who became quite familiar with the stories. Not only were extra trains added by the Canadian rail authorities, but even in the US, especially the Northeast extra cars were added to accommodate the mourners headed to Montreal for Brother Andre’s funeral.

(On a personal note, I have been fortunate to have visited the St Joseph Oratory in Montreal visiting the site where Brother Andre’s prayers helped so many. In addition, while speaking in the Detroit area, I was invited to meet those who gathered the data and testimony for Father Casey’s cause. As with most causes for beatification and canonization, there exists documentation of so many apparent miracles, the hard part is sifting through each to find the most extraordinary. Both visits left me humbled to have met those who actually knew these men, as well as in awe of God’s graces which are often extended to those the world would deem not worthy.)

Both men came into this world with little fanfare, and despite their healing gifts they would continue living that way their entire lives. However, because of their humility God gave them a gift that the richest among us would be envious of having, the gift of healing. Because of this, they may have taught us all that humility and obedience, while frowned upon in the go-go world of the 21st century, is one of God’s greatest joys. (This article barely scratches the surface on the lives of these two holy men. For more on the life of (Blessed) Brother Andre and (Venerable) Father Casey, you may want to read the following books; Brother Andre, Friend of the Suffering, Apostle of Saint Joseph, as well as The Story of Solanus Casey and this book written by a fellow Capuchin entitled; Meet Solanus Casey Spiritual Conselor & Wonderworker. Finally there is a book on both men entitled; God’s Doorkeepers. 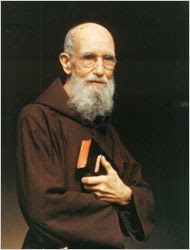 Fr. Solanus Casey, Capuchin Franciscan, was born Bernard Francis Casey on November 25, 1870 on a farm near Oak Grove, Wisconsin. He was the sixth child in a family of ten boys and six girls born to Irish immigrant parents. Bernard left the farm to work throughout Wisconsin and Minnesota as a logger, hospital orderly, street car operator, and prison guard.

At the age of 21 Bernard entered St. Francis High School Seminary in Milwaukee to study for the diocesan priesthood. Five years later he contemplated a religious order. Invested in the Capuchin Order at Detroit in 1897, he received the religious name of Solanus.

After his ordination in 1904, Fr. Solanus spent 20 years in New York, Harlem, and Yonkers. In 1924 he was assigned to St. Bonaventure Monastery in Detroit where he worked for 20 years.

Fr. Solanus spent his life in the service of people. At the monastery door as porter he met thousands of people from every age and walk of life and earned recognition as "The Doorkeeper." He was always ready to listen to anyone at any time, day or night.

During his final illness, he remarked, "I'm offering my suffering that all might be one. If only I could see the conversion of the whole world." His last conscious act was sitting up in bed and saying, "I give my soul to Jesus Christ." He died at the age of 86 on July 31, 1957 at the same day and hour of his First Holy Mass 53 years earlier.