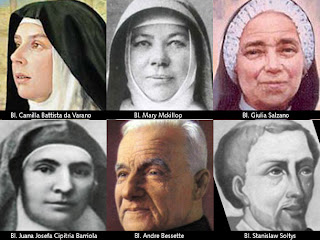 The following comes from the CNA:
This coming Sunday Pope Benedict XVI will raise six Catholics, all consecrated religious, to the ranks of sainthood. The canonizations will take place in a ceremony presided over by the Holy Father in St. Peter's Square on Sunday. In keeping with tradition, the facade of St. Peter's Basilica will be draped with gigantic banners featuring depictions of the new saints.
The six come from five nations. Polish Fr. Stanislaw Soltys of the Order of Canons Regular of the Lateran, Canadian Br. Andre Bessette of the Congregation of the Holy Cross and Italian Poor Clare Sr. Camilla Battista Varano are among them.
These three will be joined by three foundresses of orders during the same ceremony. Spanish Sr. Candida Maria de Jesus Cipitria y Barriola of the Congregation of the Daughters of Jesus; Australian Sr. Mary of the Cross MacKillop of the Sisters of Saint Joseph of the Sacred Heart; and Italian Sr. Giulia Salzano of the Catechist Sisters of the Sacred Heart, will also be canonized.
On Oct. 17, after prayers, hymns and the reading of short texts written by the six, the Holy Father will preside over their Rite of Canonization.
The rite includes the reading of the official biographies of each, the recitation of prayers, the litany of the saints, and finally, the Pope pronouncing the formula of canonization, thereby declaring them saints.
Mass will follow the rite, with hundreds of cardinals, bishops and priests, representatives of the causes for canonization of each, and thousands of faithful in attendance.
A number of Australian flags were already present in St. Peter's Square during Wednesday's general audience, showing a formidable presence even from the distant island continent, which will receive its first saint.
Celebrations will be held on Sunday in Melbourne, the city of her birth, and also in Sydney. An outdoor Mass will be celebrated in the town of Penola, where she worked to educate poor young people and founded the religious congregation.
There is also great excitement for the canonization of Canada's Blessed Andre Bessette, a humble and compassionate brother of the Congregation of Holy Cross in Montreal. He was known for his strong devotion to St. Joseph, which he shared with many poor and sick people.
TOPICS: Catholic; Current Events; Theology
KEYWORDS: catholic; catholiclist; saints
This should be beautiful -- maybe we can watch it on TV.
1 posted on 10/16/2010 11:09:06 PM PDT by Salvation
[ Post Reply | Private Reply | View Replies]
To: Salvation

How many American saints are there?

Here’s a link to the Oratory of St. Joseph which Br. Andre built. It is a place of pilgrimage and healing for people from all over the NE United States and Eastern Canada.

**Are not all Christians saints?**

This is a Catholic Caucus thread. Are you a Catholic?

Are you a Catholic? This is a Catholic Caucus thread.

From left, the tapestries of Saint Giulia Salzano, of Italy, Saint Candida Maria de Jesus Cipitria y Barriola, of Spain, Saint Stanislaw Kazimierczyk Solys, of Poland, Saint Andre Bessette, of Canada, Saint Mary of the Cross Mckillop, of Australia and Saint Battista da Varano, of Italy, are displayed on the facade of St. Peter's Basilica during a Canonization Mass celebrated by Pope Benedict XVI in St. Peter's square at the Vatican, Sunday, Oct. 17, 2010.

I have been to the shrine to St. Joseph, very, very large. The only shrine that I had seen which have ecalaters. Plus the original chapel is on the grounds. The declaring of Brother Andre to be a saints just confirms what I have believed for years, that Brother is a SAINT!