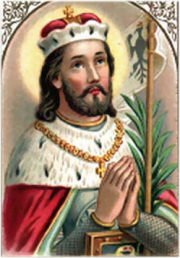 Today is the optional memorial of St. Wenceslaus, martyr.
St. Wenceslaus was born around 907 near Prague, Bohemia (now the Czech Republic). His father was killed in battle when he was 13 years old, leaving the kingdom to be ruled by his ambitious mother, the pagan. Drahomira, who encouraged an anti-Christian government. Wenceslaus was raised by his grandmother, St. Ludmilla, who saw to it that he was educated in the faith.

Drahomira resented her mother-in-law Ludmilla's influence over her son Wenceslaus, and sent men to kill Ludmilla. Drahomira's rule was so cruel in Wenceslaus' name that he was compelled on behalf of his subjects to overthrow her and assume power for himself. Wenceslaus was eighteen years old when he succeeded his father to the throne. Without regard for the opposition, he worked in close cooperation with the Church to convert his pagan country. He ended the persecution of Christians, built churches and brought back exiled priests. As king, he gave an example of a devout life and of great Christian charity, with his people calling him "Good King" of Bohemia.

Throughout his life he preserved his virginity. He had a deep love for the poor and needy and served them through many acts of charity. He often attended the funerals of the poor, ransomed captives, and visited those suffering in prison. He was filled with a deep reverence toward the clergy; with his own hands he sowed the wheat for making altar breads and pressed the grapes for the wine used in the Mass. During winter he would visit the churches barefoot through snow and ice, frequently leaving behind bloody footprints.

In the year 929, there were invasions by the German king, Henry I. St. Wenceslaus decided to submit to the German king, perhaps to avoid the horrors and suffering of war, but this decision angered his younger brother the pagan Boleslav. Boleslav invited his brother to stay at his castle. The next morning, on September 28, 929, as Wenceslaus was on the way to Mass, Boleslaus assassinated him at the door of the church.

Before he died, Wenceslaus forgave his brother and asked God's mercy for his soul. Martyred at the age of twenty-two, Wenceslaus is the national hero and patron of the Czech Republic. He is the first Slav to be canonized.

St. Wenceslaus is also the patron saint of: Bohemia, brewers, and Moravia.
TOPICS: Apologetics; Catholic; History; Theology
KEYWORDS: catholic; catholiclist; czechrepublic; saints
Before he died, Wenceslaus forgave his brother and asked God's mercy for his soul. Martyred at the age of twenty-two, Wenceslaus is the national hero and patron of the Czech Republic. He is the first Slav to be canonized.

Real holiness to forgive his brother!

St. Vaclav is my Bill’s Confirmation patron. I’ll have to cut Bill some slack today ... as long as he’s considerate to his brothers!

His parents were Duke Wratislaw, a Christian, and Dragomir, a heathen. He received a good Christian education from his grandmother (St. Ludmilla) and at Budweis. After the death of Wratislaw, Dragomir, acting as regent, opposed Christianity, and Wenceslaus, being urged by the people, took the reins of government. He placed his duchy under the protection of Germany, introduced German priests, and favoured the Latin rite instead of the old Slavic, which had gone into disuse in many places for want of priests. Wenceslaus had taken the vow of virginity and was known for his virtues. The Emperor Otto I conferred on him the regal dignity and title. For religious and national motives, and at the instigation of Dragomir, Wenceslaus was murdered by his brother Boleslaw. The body, hacked to pieces, was buried at the place of murder, but three years later Boleslaw, having repented of his deed, ordered its translation to the Church of St. Vitus in Prague. The gathering of his relics is noted in the calendars on June 27, their translation on March 4; his feast is celebrated on 28 September.

Vatican website: Homily of Pope Benedict on the Feast of St. Wenceslaus, , Sept 28-2009, during his apostolic visit to the Czech Republic

Collect:
Lord,
You taught your martyr Wenceslaus
to prefer the kingdom of heaven
to all that the earth has to offer.
May his prayers free us from our self-seeking
and help us to serve You with all our hearts.

We ask this through our Lord Jesus Christ, Your Son,
who lives and reigns with You and the Holy Spirit,
one God, for ever and ever. Amen.

Readings:
First Reading: 1 Peter 3.:14-17
But even if you do suffer for righteousness' sake, you will be blessed. Have no fear of them, nor be troubled, but in your hearts reverence Christ as Lord. Always be prepared to make a defense to any one who calls you to account for the hope that is in you, yet do it with gentleness and reverence; and keep your conscience clear, so that, when you are abused, those who revile your good behavior in Christ may be put to shame. For it is better to suffer for doing right, if that should be God's will, than for doing wrong.

I visited that church when I was in the Czech Republic!

Today is my younger son’s 3rd birthday. He was in such a hurry to be born (only 2.5 hours of labor and just about had him in the parking lot of St. Edward’s), he couldn’t wait to be born on Sept. 29th, which is the feast day of his namesake, St. Michael.

Is this the “Good King Wenceslaus” of carol fame?

Happy birthday! You could have named him Vaclav ;-).