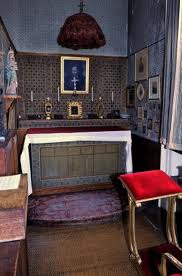 From Loss and Gain

To me nothing is so consoling, so piercing, so thrilling, so overcoming, as the Mass, said as it is among us. I could attend Masses forever, and not be tired. It is not a mere form of words -- it is a great action, the greatest action that can be on earth. It is not the invocation merely, but, if I dare use the word, the evocation of the Eternal. Here becomes present on the altar in flesh and blood, before whom angels bow and devils tremble. This is that awful event which is the scope, and the interpretation, of every part of the solemnity.

Words are necessary, but as means, not as ends; they are not mere addresses to the throne of grace, they are instruments of what is far higher, of consecration, of sacrifice. They hurry on, as if impatient to fulfill their mission. Quickly they go, the whole is quick, for they are all parts of one integral action, for they are awful words of sacrifice, they are a work too great to delay upon, as when it was said in the beginning, "What thou doest, do quickly".

Quickly they pass, for the Lord Jesus goes with them, as He passed along the lake in the days of His flesh, quickly calling first one and then another. Quickly they pass, because as the lightning which shineth from one part of the heaven into the other, so is the coming of the Son of Man. Quickly they pass, for they are as the words of Moses, when the Lord came down in the cloud, calling on the name of the Lord as He passed by, "The Lord, the Lord God, merciful and gracious, long suffering and abundant in goodness and truth". And as Moses on the mountain, so we too "make haste to bow our heads to the earth, and adore".


There are little children there, and old men, and simple laborers, and students in seminaries, priests preparing for Mass, priests making their thanksgiving, there are innocent maidens, and there are penitent sinners; but out of these many minds rises one Eucharistic hymn, and the great Action is the measure and the scope of it.
TOPICS: Catholic
KEYWORDS:
1 posted on 09/20/2010 6:49:28 PM PDT by markomalley
[ Post Reply | Private Reply | View Replies]
To: markomalley

**I could attend Masses forever, and not be tired. It is not a mere form of words — it is a great action, the greatest action that can be on earth**