A series of historical photographs have recently come to light, coming from the papers of a Roman princely family and taken between 1850 and 1880 by the famous Roman photographers, D’Alessandri. These photographs show not only members of fashionable Roman society, but also include photographs of a number of prelates and ecclesiastics, almost all of whom were of noble birth. Most of these wear the traditional abito corto, while several others wear either the new abito Piano, or formal choir dress.

These photographs show what was considered to be the proper dress for prelates and ecclesiastics up to the 1880s and perhaps even after. That the abito corto could be a very formal attire is shown by several of the prelates portrayed with it wearing stars and miniatures of Orders. As well, all of the clergy shown in the photographs also wear the skull cap to cover the tonsure. Older priests were still seen doing this up until the 1970's in Italy.

The photographs are carefully composed, and the derivation from painted formal portraits is very evident by the subject’s pose, background and general composition. When the prelates or cardinals are wearing choir dress, the chairs and accessories are more formal and expressive of their rank: they sit on a tronetto, a throne-like armchair, next to a table covered by damask or a gilt console supporting an ink-stand (which alludes to the signing of documents as members of ecclesiastical or civil government), their feet resting on a cushion or foot-stool. If they are in abito corto or Piano, their pose and background are less formal. All wear buckles on their shoes, as shoes without buckles were for informal dress.

In any case, it is evident that the photographs show the prelates and priests at their most formal and elegant, and that the subjects were members of Roman aristocratic society.

It is very probable that quite a number of the prelates, ecclesiastics and cardinals portrayed were not priests, but only tonsured or, at the most, deacons: the Roman curia was principally concerned with governance and law, so a large part of the curiales, including quite a number of cardinals – Cardinal Antonelli, for one – were clerics but not priests.

A number of the photographs show cardinals, prelates and priests in the newly fashioned abito Piano; and one photograph, of a French priest, shows him dressed with the cassock and Roman/French hat as was the usage in France, a dress which by the turn of the century spread over the rest of Europe.

Catalogue of the Photographs 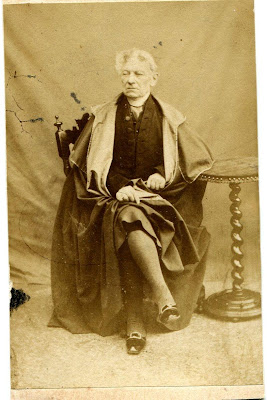 Cardinal Giuseppe Ugolini (1783 + 1867)
The Cardinal is wearing the red tabarro edged with gold braid and red silk stockings, and wears his coat unbuttoned, as usual in the 18th century. Note the elegant, worldly nonchalance of the Cardinal’s pose, and the coiffure à la Brutus, that had been fashionable in his youth. (By coincidence, the small occasional table he is leaning on is now owned by the author of this piece.) 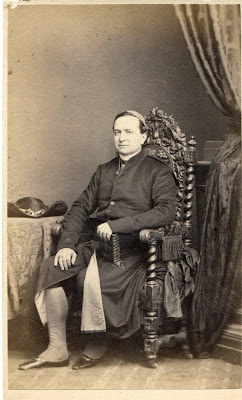 Unidentified cardinal.
The ferraioletto is attached to his shoulders; note the red silk lining of his coat, and the large three cornered hat with red cords and tassels on the table. 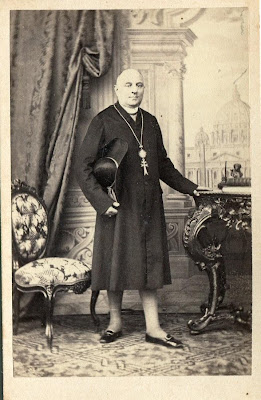 Unidentified Commendatore di S. Spirito.
This prelate, very probably a bishop since he is wearing violet silk stockings, wears the badge of his office (the double cross of the Holy Ghost surmounted by the Dove in a sunburst). Note, again, the enormous size of the hat: a Roman hat’s brim is much narrower, and would have looked small by comparison. 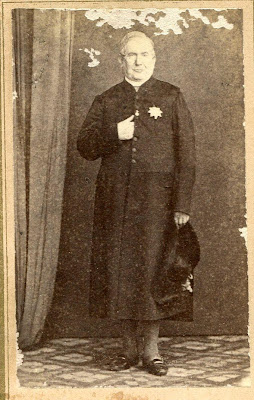 Cardinal Antonio Mateucci(1802 + 1866)
The cardinal is wearing the red skull-cap, silk stockings and tassels on the hat, the star of an Order on his breast, and a miniature decoration from his second or third buttonhole. The ferraioletto is just visible on the right, and the hat, of the very large Roman kind, is probably over 70 cm. wide. The abito corto he wears is buttoned up like a frock coat. 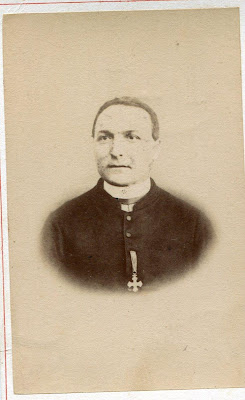 Abate Matteo Mattei
The Abate is wearing the abito corto, as shown by the low opening of the collar. He is wearing a miniature decoration hanging from his third buttonhole, as appropriate. 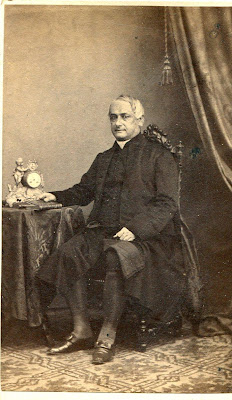 Unidentified priest.
He is a priest or cleric, as his black silk stockings show. The coat is unbuttoned, like Cardinal Ugolini’s, the ferraioletto’s lower edges hangs behind him, and the inkwell, an emblem of jurisdiction, is substituted by an elegant ormolu clock. 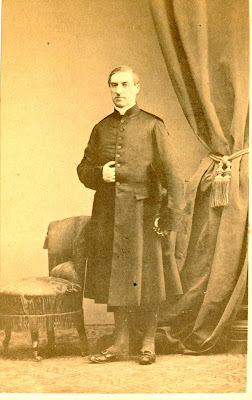 Msgr. Andrea Pila, Minister for the Interior.
Note the violet silk stockings and large 18th century style cuffs; the ferraioletto’s lapel is visible on his shoulder. 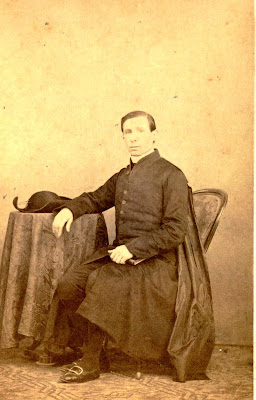 Don Bernardino Lombardi
The Abate Lombardi was not Roman: note the smaller size of the three cornered hat in comparison to the huge Roman ones. The cords holding the brims in place are visible. 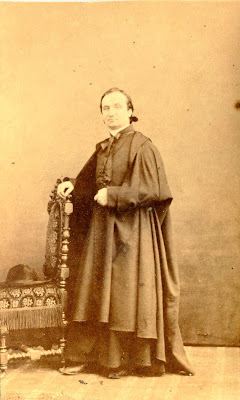 Abbé Gaspard Mermillod (1824 + 1892)
One of his time’s great preachers, he was created bishop of Lausanne and Genève, despite much opposition from the protestant Swiss government, and later a Cardinal.
Dressed in French 19th centurgy style, he is wearing the cassock and buckleless shoes, while his “Roman” – but really French - hat rests on the chair. 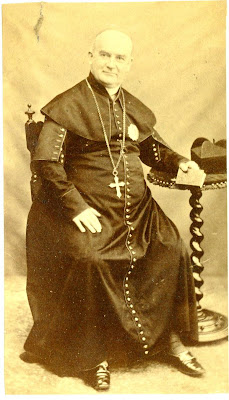 Cardinal Nicola Clarelli Paracciani (1799 + 1872)
The cardinal is wearing a zimarra, with the short pellegrina and sleeves, but with red piping as in the Pian dress; on his breast, on the cassock, but under the pellegrina (pushed aside to display the decoration), the star of an Order. 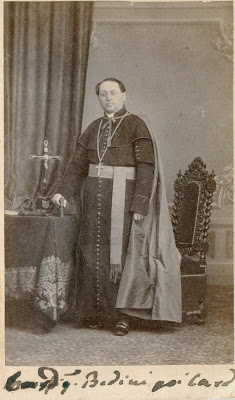 Cardinal Gaetano Bedini (1806 + 1864)
Jurist and diplomat.
An early instance of the new abito Piano; note the small size of the sash and the tick fringe. 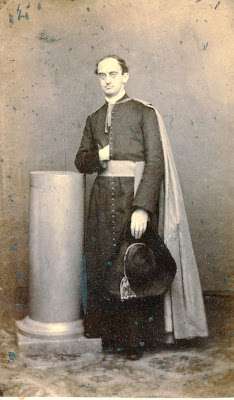 Msgr. Edoardo Borromeo
A member of the great Milanese princely family, he was Maggiordomo of Pius IX who created him Cardinal. While wearing the abito Piano, he still has the very large traditional Roman hat, instead of the French round hat. The Pian dress is without the pellegrina, reserved for cardinals and bishops. 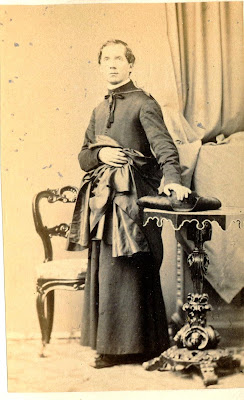 Canon Albini, Vigevano
A canon of the cathedral of Vigevano.
Again, while wearing the cassock and ferraiolo, this canon from Vigevano has the traditional three cornered hat, but smaller in size than the enormous Roman ones. 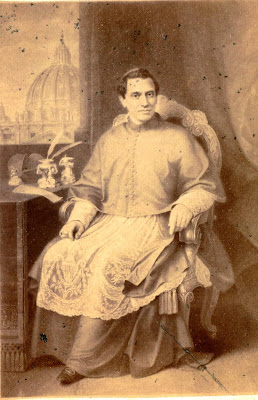 Cardinal Giacomo Antonelli (1806 + 1876)
Photograph of a painted portrait, which shows how closely D’Alessandri’s photographs follow painterly conventions of formal portraiture, which are all present here: the tronetto, the 16th century style silk covered table, the bell and ink-well, the petition waiting to be signed. Note the mantelletta covering the rochet: the rochet being a sign of jurisdiction, it had to be covered when in the presence of a superior or outside one’s jurisdiction. In Rome, the only uncovered rochet was the Pope’s.
Cardinal Antonelli, the much maligned Secretary of State of Pius IX, was a brilliant statesman and minister of finance, and one of the last Cardinals never having been ordained priest, but simply tonsured. Extraordinarily handsome as a young man, he collected rare flowers and precious stones. 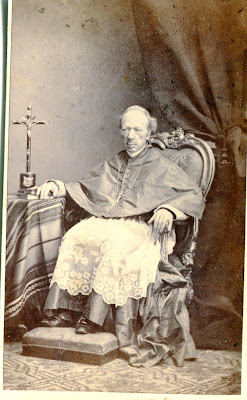 Unidentified Cardinal
Pose, setting and tronetto are almost the same as in Cardinal Antonelli’s portrait. Note the train of his cassock. 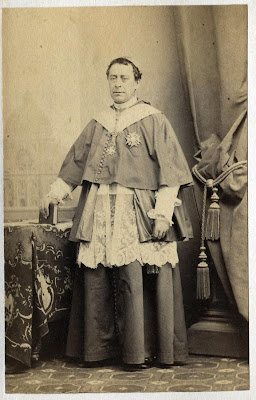 Cardinal Miguel Garcia Cuesta (1803 + 1873)
Being in Rome, the cardinal wears the mantelletta under the mozzetta, to cover the rochet, which is crimped. He is wearing the Grand Cross of the Spanish Order of Charles III. Note the style of the rochet’s cuffs. 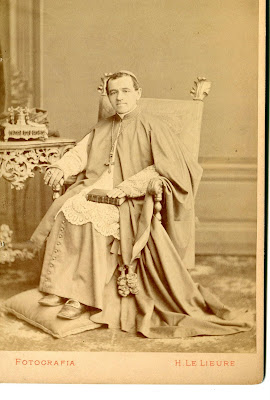 Unidentified bishop.
All the elements of the formal portrait are shown: the traditional tronetto, the ink-stand in the gilt console, the cushion for the feet. The bishop is wearing the manteletta covering the rochet, and his train is trailing on the carpet. 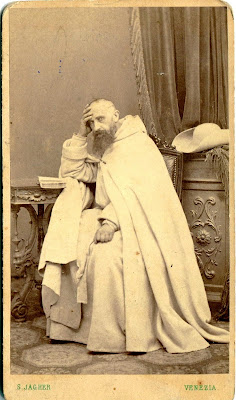 Fr. Emiliano Neri
A Carthusian monk, he is photographed in a picturesque and melancholy pose, his immaculate habit arranged in noble, graceful folds; note the white hat. 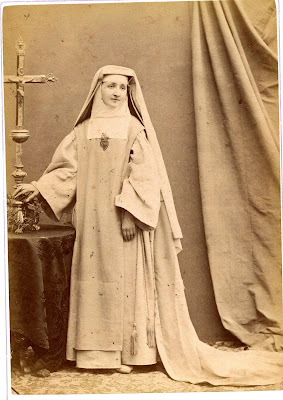 Sr. Guendaline de Raymond, in religion Mother Marie Veronique Giuliani, 1873.
The formality of the setting – the damask covered table, the rich crucifix – correspond to her rank as abbess, shown by the long train, an emblem of jurisdiction.
This nun, definitely a beauty, strikes a melancholy, elegant and romantic pose. Note the curious style of her shoes, of the same material of her dress. 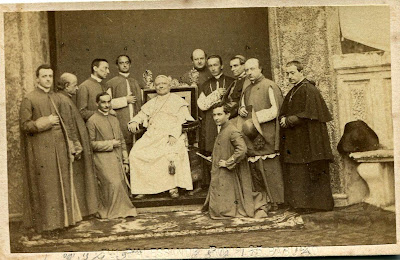 
The cassock, sash, and biretta as well as the abito corto were respectively the common ceremonial dress of magistrates, priests and doctors of law, medicine, etc., and gentleman’s court dress. The abito corto adhered to the rules of the Council of Trent, which prescribed priest’s dress to be modest, austere, identifiable as priestly, yet dignified. These two forms of dress expressed the honourable public position held by the clergy in society.

The disappearance of the abito corto would see an erosion in the distinction between everyday clerical wear and ceremonial and liturgical dress; it further did not provide for a particularly adequate street wear. As a consequence it rendered necessary the introduction of the douillette or greca, so that the cassock should not be exposed out in the streets. TOPICS: Catholic; History
KEYWORDS:
1 posted on 09/11/2010 6:39:12 AM PDT by markomalley
[ Post Reply | Private Reply | View Replies]
To: markomalley

Fascinating information and thank you for posting it ! ! !

if ever you find yourself traveling through Atlantic Canada, the Acadian Coast, centered around Caraquet, is both beautiful and has many amazing Catholic treasures. (Travel NORTH for summer vacations!) One of them is the Pope Museum. Apparently a former war hero, successful entrepreneur and former mayor, before he died, built a wonderful museum (as well as a nearby sanctuary garden of Divine Mercy). The museum included traditional clothes of dozens of the principle religious orders... as well as reproductions of paintings of the popes, the papal crests, historical artifacts, a scale model of the Vatican / St. Peter’s, including all of the hundreds of statues...

Everyone should be sure to check out part I of this series—it has the necessary explanations of the various technical terms for the articles of clothing.

5 posted on 09/11/2010 10:27:51 AM PDT by Salvation ("With God all things are possible." Matthew 19:26)
[ Post Reply | Private Reply | To 4 | View Replies]
To: markomalley
This explains what I thought was an error on the part of the director of the film The Mission which had a visiting cardinal traveling about in what I considered a late 18th century business suit. It all makes sense now. The director and costume designers got it absolutely right. Thank you for posting.
6 posted on 09/12/2010 10:31:04 AM PDT by Oratam
[ Post Reply | Private Reply | To 1 | View Replies]